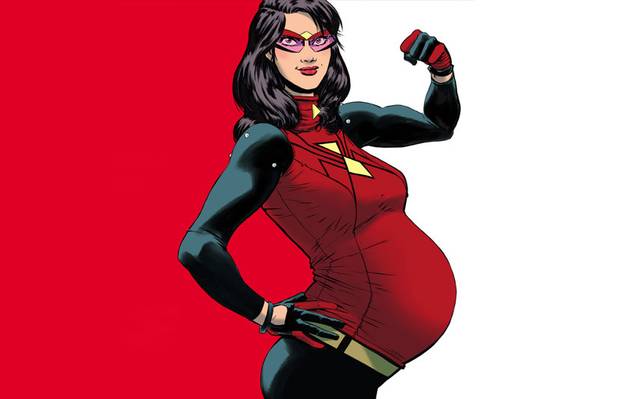 With Mother’s’ Day coming up I wanted to do something really special. Researching this, I found an abundance of Father figures from the comics that I frequent, but as far as mother figures they were a little harder to come by. It was actually a lot harder to find comic book moms. Sure you have the more Iconic ones like, Martha Kent or even Aunt May, but what about some of the others?

Watching this last season of Jessica Jones on Netflix we are all aware that she has her own mommy issues with Alisa Jones. I was surprised to find that Jessica was actually a mother herself! In The Pulse and Young Avengers, Jessica Jones and Luke Cage have a daughter named Danielle Cage. Not only that but in the year 20XX Danielle Cage takes on the Alias of Captain America. Who Knew?

Talia, psychopath, mother, daughter to Raz ah’Ghul. Talia stole Batman’s DNA to create the heir to the Ah’Ghul Dynasty. She raised a mini version of herself, a crazy killing machine. So all in all I guess you could count her as instilling values to her son. Sure super messed up values, but she still must have been an effective teacher.

A vital part of the Fantastic Four by day, also a mother by day, Sue Storms is a true super mom. Having a very difficult pregnancy with Franklin she traveled to “the Negative Zone” where she then had to borrow the Cosmic Control Rod of Annihilus. Talk about going to the ends of the earth for your kid.

Mother to the infamous Wonder Woman and Queen of the Amazons, Hippolyta has a full plate. She needs to maintain the balance of the Myscira AND raise an unruly Diana. She has to make the tough calls, like when she finally gives in and allows Diana to train. She is doing the best she can to watch over her and allow her to grow up, which can be hard for a mother to learn the balance of.

So Gertrud really only exists in Gotham but I needed to add her because she was such a good mom to Oswald. She has unconditional love for her son, and wants to protect him. Gertrud is full of compliments for Oswald and truly thinks he can do no wrong. Not sure if that is a good thing or a bad thing, but it is a typical MOM thing.

That’s right, Harley Quinn, the most tragic story in the DC universe gets a bit sadder with this revelation. Having Joker’s daughter, Lucy, she is forced to give the child up. Granted Lucy now lives with her sister and she seems to get constant updates about her, I give her a lot of credit for making that tough call. It’s not easy to put your child’s welfare before your own wants but that is exactly what Harley has done, and she deserves top mom credit for it.

Mystique is biological mother to the villian, Greydon Creed, and the Hero, Nightcrawler. That puts her on the list, but what I really admire is her willingness to take in Rogue. When she started looking after Rogue she was only about four years old and had just run away from home. It’s true that the two women have grown apart and have mixed feelings for one another, actually they pretty much hate each other, but the history is there.

Madeline Pryor is the clone of Jean Grey. Her and Scott Summers/Cyclops have a child, who would become Cable. Scott basically treats her terribly and ends up leaving her and the kid in Alaska where her and her son get attacked by Marauders. Even while all this is happening she still has her son’s best interest at heart. Even if that means calling in the X-Men to help out.

The newest reboot of Spider Woman had a huge twist. She was pregnant! It was later that we found out that she chose to do this herself. She took the steps necessary to go to the doctor, get inseminated, and then have and raise the baby on her own. This is a new type of Super Mom that really resonates with the term Girl Power. A woman in charge of her own body, a woman who became a mother by choice, on her own, is a mother that must be truly committed.

Hey, I did preface this with “It was harder to find Comic Book Moms”, didn’t I? While not technically a mother, Alfred made the list.  When Bruce’s parents died he really took a step up and took care of master Bruce. Dealing with a kid day to day, making meals, doing laundry, checking in on their emotional well being, all things a mother does on the regular. So to that I say hats off to Alfred.

Do you know of any other comic book moms?
Follow me on Twitter @Bremoonprincess and let’s talk.