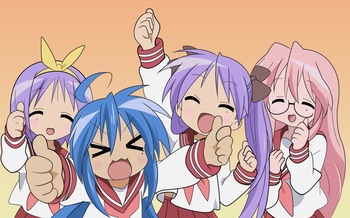 If you’re an avid manga reader, chances are you’ve seen a specific story telling style where each installment of the series conveys it’s situations from start to finish using only four panels of the same size. This manga style is called Yonkoma. It’s primarily used for gag manga, where the story is told through short jokes.

Rakuten Kitazawa (who used the pen name Yasuji Kitazawa) was the first person to create one in 1902. Many western comics, such a Peanuts adapted this style in the mid-20th century. 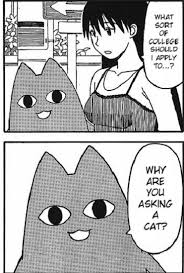 Azumanga Daioh is the story of a group of high school girls who have to deal with tests, crazy teachers, friendships, making the most of the summer vacation, violent cats, lucid dreams, body image issues and, most of all, each other.

I put Azumanga Daioh up first because this is the best example of a well used Yonkoma format. Azumanga Daioh’s storyline is strung together of tiny jokes, and most punchlines work as a stand alone without knowing the entire synopsis of the series.

Azumanga Daioh has been the staple for Yonkoma since it’s debut in 1999. The series is famous for it’s Slice of Life plot combined with surrealism and slapstick comedy.  It paved the way for other comedy Yonkoma to become anime in the future, and Azumanga Daioh will always be my favorite four panel manga.

Tsuredure is another favorite of mine. It’s a great use of the Yonkoma format because it follows the datings lives of about a dozen different teenage couples and all of the 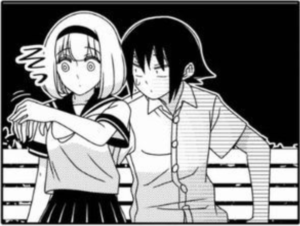 awkwardness that comes with learning how to begin a romantic relationship with someone. Though it’s technically a “romance” anime above all else, it’s one of the funniest manga I’ve read. The format gives the mangaka the freedom to explore different types of relationships, so each stand alone joke has the opportunity to be relatable to a wide audience. Since there’s so many different interactions with different characters, it’s easy to find one you can relate to the most. 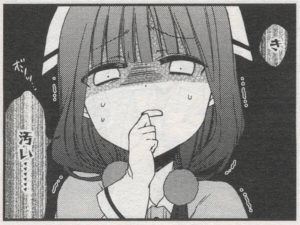 Blend S is as generic as it is unconventional. In one sense, it’s another adorable addition to the never ending group of stories about cute girls who meet other cute girls who all wear different colored outfits and fufill different personality type fetishes. On other hand, it’s completely self aware about what people expect the story to be like and turns the entire genre around completely. The concept is a pretty meta point of view, and openly acknowledges that there’s an audience of people who expect to fawn over cute girls with pandering personalities. The comedy aspect kicks in when they go onto explain that each girl has to maintain an unrealistic persona for their customers, while they maintain a completely different attitude in their spare time.  It ties into the “pretty girls getting into trouble” gag manga, but dares to take on a completely new perception on the entire ordeal. 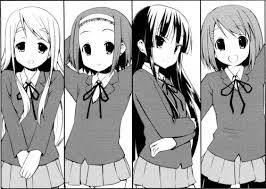 give K-On!’s source material much though, considering that it’s best known for it’s soundtrack. The series revolves around the band created among the characters themselves, but it’s dialogue revolves heavily around conversations about music itself. You have to have a strong storytelling platform to be able to hook the audience on the series without being able to attach actual audio to it. The personalities of the characters are also conveyed well using the pacing that only Yonkoma can offer.

Lucky Star is a manga about anime and the culture that surrounds it. It’s one of the ultimate “light hearted” series, where there’s very little conflict among the characters other than “how do I manage to goof off as much as possible” and “why are my friends such nerds”. Each situation is usually resolved as much as possible as soon as it’s introduced, so for a manga that exists only to tell otaku jokes, this format allows for the reader to consume joke after joke without it coming on too thick. 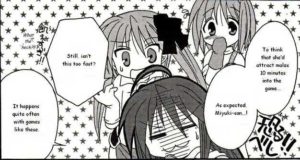 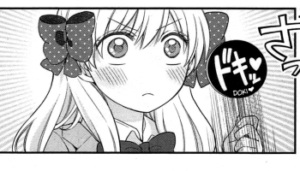 The last one I want to include is Monthly Girls. It’s a story about a girl who has a crush on her classmate, and when she confesses he assumes that she is talking about his manga and just gives her an autograph. She learns that he is secretly a famous Shojo manga artist, and becomes his assistant. This is a hilarious tongue-in-cheek “Shojo Manga” telling meta jokes about the Shojo Manga world. If you’ve read one too many Shojo manga that takes itself too seriously, this is a neccisary series to add to your library.

What are your favorite Yonkoma? Which do you reccomend I try next? Let me know in the comments and keep watching Anime Weekly and Nerdbot for more! 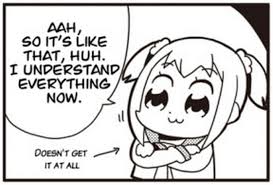 (I’m not covering Pop Team Epic, and you can’t make me.)