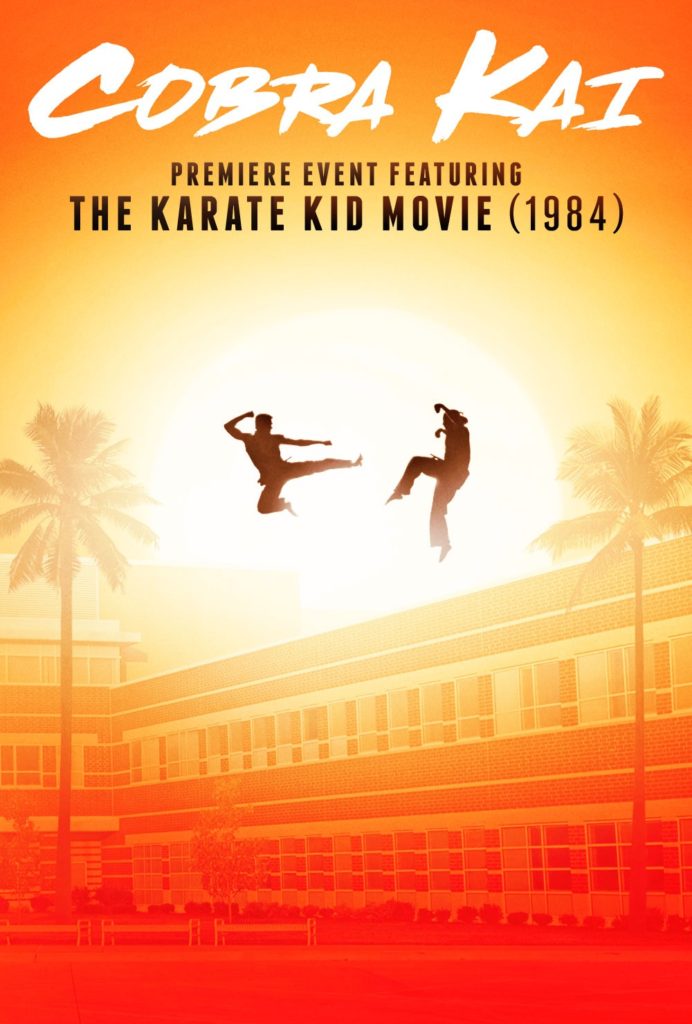 When I saw that there was a trailer for a new installment of Karate Kid starring Ralph Macchio and Billy Zabka I figured it was a joke. Some Jimmy Fallon sketch that was floating around. Upon further investigation I discovered it is in fact genuine. Genuinely badass.

Now, even after discovering it wasn’t some talk show host being cute, I hesitated to watch it.  It still whiffed of a little sadness.  The Karate Kid series was taken out back and beaten to death with a shovel by Karate Kid III. I don’t even care what happened in the Jaden Smith one or the Hilary Swank one (which still maintains a successful run on the USA network at 4 a.m.). And I say this as someone who loves Karate Kid III. That three grown men: Miyagi, Cobra Kai instructor Kreese and some evil billionaire army buddy of his, would go to such lengths to play a revenge game over a child who had won a karate competition over a year ago, is delightfully insane. Screaming at the street-signs insane, much like Danny’s mother, who lets him donate his hard-saved college fund to an elderly maintenance man’s dream of starting a bonsai store. And something about toxic sludge.

It’s great, but it was clearly written by a team of space aliens and children that have no clear notion how people function in the real world. Could one possibly hope for a better installment starring two middle-aged men who haven’t had a notable role since L.A. Gear high-tops were the rage? Without Pat Morita? And On YouTube no less?

If the trailer is any indication yes. For quite some time there’s been a fan theory floating around the internet that Daniel-san is actually the bad guy in Karate Kid. And they’ve got something there. Danny is constantly engaging with Johnny and his friends even when he doesn’t need to. He’s a braggart, he’s impetuous and occasionally pretty annoying. It’s Miyagi who is constantly telling him to chill the hell out and quit antagonizing packs of trained fighters. He wins the championship by kicking a classmate full-force in the face! I’m no youth league karate judge but I’m pretty sure you can’t do that. If I was in a boxing match and hurt my hand and won the fight by kneeing an unsuspecting opponent in the crotch that wouldn’t make me a hero. I wouldn’t get a trophy, I’d get a parent-teacher meeting.

Cobra Kai flips the game by introducing Johnny as the wish fulfillment of every bullied kid: Once popular Johnny is a Coors Light guzzling loser in a crappy apartment and no apparent prom queen at his side. Daniel, (who, remember, invested his mother’s life savings into a tree store) is a sleazy car salesman and local celebrity, still basking in the hero worship of cold-cocking a kid in a karate tournament 35 years ago (as one does). He even brags to his co-workers that he kicked the face of this sad looking schlub who wandered in the dealer-ship presumably to score some free coffee (the movie doesn’t come out until May, so I will be making several presumptions based on the trailer). Now many trained athletes will tell you that hard work and a clean lifestyle will keep you in shape. Johnny proves that a steady diet of gin and Hot Cheetos are all it takes to keep a machine well-oiled, as he round house kicks some punks in a parking lot. Inspired by violence and, I don’t know, helping kids?, he decides to get Cobra Kai going again, despite the fact he doesn’t look like the type of dude that could afford two-ply toilet paper nevertheless a down payment on a dojo space.

You can’t have an underdog sports movie without some underdogs, so he gathers a ragtag team of unlikely misfits, while Danny occasionally takes time out of his schedule of being rich and having a hot wife to mock a guy who treated him with respect after losing a tournament 35 years ago.

White-hot, senseless revenge and undying grudges have always been a running theme in this franchise, so when Danny sees that the Cobra Kai dojo has reopened, he naturally says to his wife. “That’s nice to hear. I’m glad that Johnny has put his natural talents to help the kids of the community.” Just kidding!  Of course not. He goes on a mission to tear apart his old friend over a decades old perceived slight, suiting up in his old gi. Which still fits, good for you Daniel-san.

So his plan is to… fight Johnny again? In your late 40’s that’s just called assault buddy, doesn’t matter what you’re wearing. Maybe fight the kids? Again, major legal problem there. Start his own dojo, with his own misfits and wage and all-out war? Sounds time consuming. It’s not very clear what he has in store. The trailer leaves it up to the viewers’ imagination, but it looks pretty badass.

Oh, and they curse, just to let you known this isn’t some lame Mighty Ducks reboot… God, they’re going to do that aren’t they? They are going to reboot the Mighty Ducks, because if you say reboot three times and a beloved classic’s name a reboot will appear. Sorry guys. Read my review on the Mighty Ducks 4: No Ducking Around in 2019.

Are you excited to see the Cobra Kai? Are you team Daniel or Johnny? Let Nerdbot know in the comments!