Not literally, obviously. He-Man would kick Goyer’s ass for one, plus he doesn’t really exist. That said, the challenge of getting Adam to the big screen does seem just as hard, if not harder. Goyer does have history with rich kids trying to save the world however, being responsible for the penmanship in a little known trilogy about a Dark Knight.

For those not born last century, He-Man is the alter-ego of Adam, Crown Prince of Eternia. When he holds aloft his magic sword and says the magic words, he becomes the muscle bound hero He-Man. With help from the Masters of the Universe (a team of Neesons with VERY particular sets of skills) He-Man fights the evil Skeletor to keep the kingdom of Eternia safe. 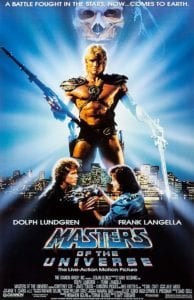 If it ever makes it to screen, this won’t be the first cinematic outing for the character. Dolph Lundgren brought He-Man to to life in a critically panned adaption in 1987, and it was panned with good reason. In a move so typical of adaptations over the years it’s almost a cliché, the writer ignored the original material.

David Odell removed the core plot point of Prince Adam using a magic sword to become He-Man. Instead, Adam was the hero and we barely heard the name He-Man mentioned. Additionally, instead of the magical kingdom of Eternia, our heroes spent most of their time in New Jersey driving around in a suped up pink Cadillac. The most amazing thing about the whole movie is that it didn’t kill the career of teenage’d Courtney Cox.

Most of these changes were likely due to budget. You have to remember the movie appeared in a pre-MCU world, so represented a big risk. Made now, a studio may actually do the movie justice. It didn’t help that Odell had a history of writing trash, also being responsible for cinematic turd, Supergirl. With Goyer writing the most recent draft things are looking a lot more promising, though he is also planning to direct and the last super-hero movie he took the chair for was Blade: Trinity…

What would you like to see in a MOTU interpretation? Let Nerdbot know in the comments!