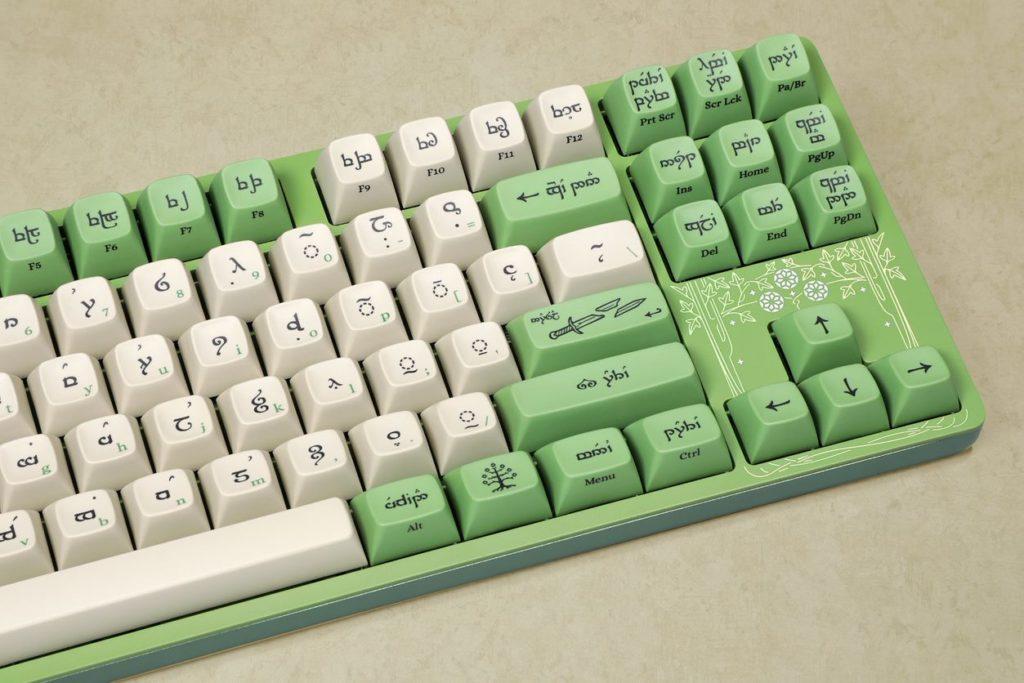 If you ever wanted to teach yourself the Dwarvish or Elvish alphabets created by JRR Tolkien, this is your chance! DROP is officially collaborating with “The Lord of the Rings” to offering two keyboards, one in each language. The roman letters can be found on the keycaps alongside the other languages so you can easily see what you’re doing if you forget where a letter is.

With Dwarvish build quality and character to spare, the Drop + The Lord of the Rings Dwarvish ENTR is both king under the mountain and king atop any desk. Rule Erebor, the Misty Mountains, and beyond with MT3 Dwarvish keycaps, case artwork featuring the Doors of Moria, and more.

Like so many true Elvish objects, the Drop + The Lord of the Rings Elvish ENTR exudes elegance at every edge. Take your fingertips to Rivendell and distant shores with MT3 Elvish keycaps, custom case artwork featuring the Two Trees of Valinor, and more.

DROP is also offering intricate keycaps that are compatible with the keyboards. All three caps feature the One Ring. There are also wrist wrests that feature Smaug the Stupendous.

As far as the design of these goes, there are a few things I want to point out that are really cool. On both keyboards the escape button is the Eye of Sauron, which you definitely did want to escape from Middle Earth. Enter on the Elvish keyboard is a sword breaking, which is neat because you literally use the enter key when you want a line break. The Space bar can be fitted with the one ring’s writing if you prefer that to a blank one. And the keycaps can all be sold seperately in packages, so if you want an Elvish keyboard and a Dwarvish number pad, you can totally do that!

Check out the full “The Lord of the Rings” collection on DROP’s website here. Preorder pricing is available through August 31st, 2022.

Prime Video’s “The Lord of the Rings: The Rings of Power“ is set to premiere on Amazon September 2nd, 2022.