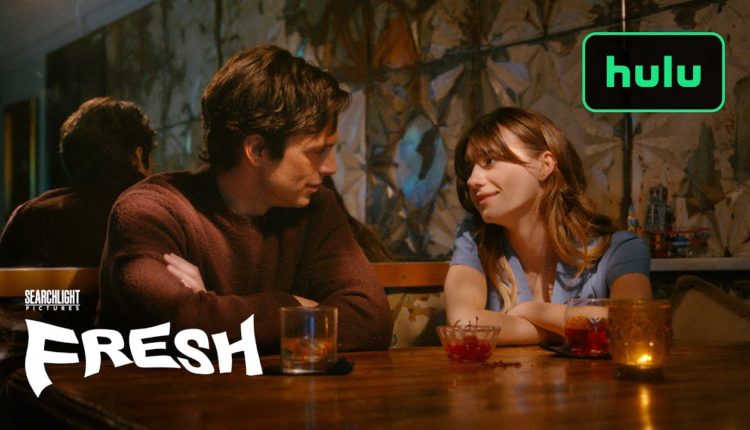 One of the few Sundance Film Festival entries I unfortunately missed, “Fresh” was quick to be purchased after it screened, and even quicker to arrive on Hulu. Dropping this week, thriller “Fresh” somehow manages to be darkly funny while also telling a haunting tale of the perils and dangers of dating in the modern world.

It is powered by phenomenal performances and tight, purposeful script from Lauryn Kahn, and is one of those rare films where the less you know about it the more effective it becomes. The mystery surrounding the events of “Fresh” is pivotal to its effectiveness, as any kind of insight into what transpires before you watch takes away from the impact it has. And boy oh boy, does it hit hard when it swings. It is a unique thriller that brilliantly exaggerates our worst fears about meeting strangers and dating.

Directed by Mimi Cave, “Fresh” stars Daisy Edgar-Jones as Noa, a young women who is trying her hand at online dating to very little success. By coincidence, she meets Steve (Sebastian Stan) at a grocery store, and they immediately strike up a relationship. During a getaway proposed by Steve, Noa is suddenly thrust into a fight for her life as Steve is not everything she thought he was. That’s about all I’m willing to reveal to you, as the barebones are all you should go into the film with. You can absolutely find the entire detailed synopsis practically anywhere, but I can’t stress enough how much better the film is when you know as little about it as possible.

The true success lies in two things: the mystery of events in its first viewing and the stellar performances from its leads. Edgar-Jones delivers a breakout performance as Noa, displaying a strong, independent woman who finds herself in the worst situations imaginable. Jones and Stan have incredible chemistry, but it’s Stan who really shines here.

You have never, ever seen Sebastian Stan like this, and I am completely convinced that creepy Stan is the best Stan. He is creepy, confident, and haunting, and yet still somehow charming and charismatic. It is probably the best version of The Winter Soldier you will ever see, and I really hope he takes on more roles like this because he is absolutely fantastic here.

In addition to the stellar performances, the incredible mystery that unfolds sells the story more than what the script actually calls for. That’s not to say that “Fresh” doesn’t have a solid story, but in the grand scheme of things it isn’t necessarily all that original when it gets stripped down to its skeleton. Kahn’s concise script and Cave’s skill behind the camera elevate the story to be gripping and engaging, tapping into the greatest fears of modern dating without ever feeling heavy handed or overplayed. The film is incredibly balanced and well paced, letting the events speak for themselves and constantly adding layers of shocking moments without every being grotesque. Just when you think you’ve got it all figured out, “Fresh” throws another curveball at you that derails whatever theories you had literally minutes before.

If I have any complaints, is that the film’s ending feels a little abrupt considering how engaging the journey actually is. It’s one helluva rollercoaster ride, but the conclusion feels a little disappointing. Not that there’s anything wrong with how it ends- as it feels justified and a logical end to an intense story- but there is still a lot to be desired as far as exposition and some questions you have about the players overall. Maybe that’s intentional, which would makes sense considering that “Fresh” relies more on what it doesn’t reveal than what it does. It simply feels abrupt, but that’s nitpicking as best as the conclusion injects an incredibly wild ride with extremely dark humor.

That is the hidden ingredient for success when it comes to “Fresh.” As gripping and unsettling as it is, it never shies away from being surprisingly humorous. Most of that is in Stan’s performance, who manages to play one of the most despicable human beings as a charming, funny, and sometimes vulnerable human being. There is just so much that works, it’s hard to really describe what doesn’t without spoiling anything.

I highly recommend “Fresh.” It is both a cautionary tale, a critique about modern dating, and just damn good thriller that manages to be disturbing without needing to go over the top with graphic depictions of its subject matter. The restraint is a strength, and the carefully crafted pacing paired with stellar performances makes it a must see.

“Fresh” is currently streaming on Hulu. You can watch the trailer below.

Hear Keanu Reeves as Batman in “DC League of Super-Pets”