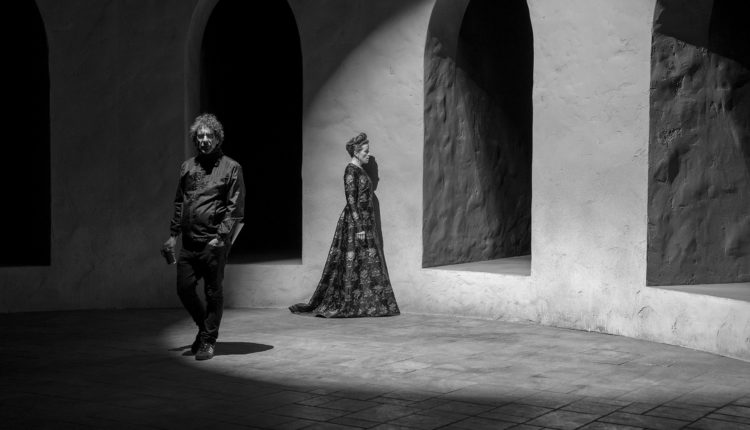 The Long, Empty Corridors of “The Tragedy of Macbeth” [Review]

One thing that is an absolute certainty, regardless of how you feel about “The Tragedy of Macbeth,” those Coen brothers sure do know how to make a film. Whether together or flying solo (as Joel Coen does here), there is simply no denying the immense skill and masterful vision the brothers bring to their craft. Those unmatched abilities are on full display here in “Macbeth,” with one of the most visually stunning and unique film adaptions I’ve seen all year matched with top notch performances from a number of top notch actors. What transpires on screen in nothing short of amazing, with Coen creating a visceral and unforgettable movie watching experience, regardless of whether or not you enjoyed the film. That seems like a conflicting statement, but I assure you: the visual experience Coen creates is the driving force of his successful interpretation. It sets the film apart from its predecessors, and cements “The Tragedy of Macbeth” as one of the most visually stunning and well-made films of 2021.

Written for the screen and directed by Joel Coen (first time flying solo without Ethan), Coen seeks retell the classic Shakespearian tale. The film is a pretty direct interpretation on paper, keeping a large majority of the play intact and in order, with few liberties taken when it comes to the narrative itself. The film is packed with notable stars, lead by Oscar winners Denzel Washington as Macbeth and Francis McDormand as Lady Macbeth. The cast is rounded out by Corey Hawkins as Macduff, Brendan Gleeson as King Duncan, Harry Melling as Malcom, Alex Hassel as Ross, and Kathryn Hunter as the witches (playing all 3 of the weird sisters).

In addition to getting most out of his actors, Joel Coen seems dedicated to creating an atmosphere to operate in as the first and foremost priority. This is clever choice, as “Macbeth” sets itself apart on these laurels alone. The world that Coen creates visually is haunting and empty, with an ominous hue that permeates every frame of the black and white picture. Even in a dual color pallet, there is a hue of unsettling mischief and tragedy that sets itself comfortably among the picture, which brings the dull and dimly lit frames to life in a way that somehow make “Macbeth” feel like it’s bursting with color. This is furthered by Coen’s choice to include practically zero props or furnishing anywhere. Only a master could make a set intentionally designed to look empty and void of nothing but the actors and the walls feel full.

There is nothing but necessity in “Macbeth,” with every actor holding nothing more than what they need to. This predominately means swords, as that seems to be one of the few actual props that made it onto to set. The rooms are bare and unfurnished, the corridors and hallways are long and dark, and punctuated by the minimal amount of lighting needed to see what is happening. And if Coen can help it, he opts to use natural or feigned natural lighting to illuminated dark deeds instead of littering his sets with torches and candles. This is a stripped down, actor lead, atmospheric take, and there is truly nothing out there like it. You really have never seen Shakespeare on film like this, and I mean that in that most complimentary way possible. “Macbeth” is cinema, not a movie. And as much as I hate the discourse surrounding this arbitrary distinction, there is simply no film that exemplifies that distinction like this particular viewing experience.

Denzel is terrific as Macbeth. He turns in a much more subdued, introspective take on the character, delivering a conflicted man who wants to be resolute but can’t seem to escape the regret of treacherous deeds. Denzel transforms the haunting of Banquo into a man driven mad by both his obsession with actualizing his power grab and the things he has done to achieve them. I get on Denzel for being great at one speed, but “Macbeth” tests his range a bit more than I’m used to seeing and I found it rather refreshing. Sure, there’s some of that “Training Day” Denzel that creeps through (as I believe he is now incapable of restraining that), but for the most part he embodies the actual tragedy of Macbeth himself and I see why he makes a strong case for a Best Actor nomination.

Everyone else is solid, even McDormand who hasn’t been as widely well received as her co-star, does well. McDormand may not have been a first choice, but Joel seems to understand how to test the limits of his actors (and wife). McDormand’s Lady Macbeth is a clearly manipulative woman with strong desires for success. Her prodding and pushing of Macbeth to set his dastardly plan in motion makes them both equally tragic characters, and she too descends into madness in a believable way. Some of that is how Coen frames their descent, which again creates a chilling atmosphere that is elevated by strong delivery and actor emersion. The other is the subdued, internal depictions of inner monologues, as Coen opts to really transform the asides and inner thoughts into emotional quandaries that slowly but surely rip apart our stars from the inside out. There is some standing around repeating lines with a sort of “this is how an ACTOR portrays Shakespeare” but not so much that it puts you off from enjoying the film as a whole.

The last piece of the puzzle for outstanding performances lies solely with Kathyrn Hunter. Hunter is no stranger to Shakespeare, having cut her teeth on the stage and a touring Shakespeare company. But “Macbeth” is a breakout performance, one that will sadly go overlooked but absolutely deserves to be recognized. As good as most seem to be in “Macbeth,” it is Hunter who runs away with the material. She internalizes the prose in a way that no one else does, and I say that of the actors I think do a pretty solid job in their Shakespearian delivery. You just don’t know Shakespeare until you watch someone with intimate knowledge of his work, and Hunter displays a level of connection and understanding that no one else in the film is able to tap into. It’s hard to explain, but when you see how different everything feels every time she speaks or acts or contorts, you instantly know that you are watching a truly special, one of kind performance.

I’m a big fan of Shakespeare, and “Macbeth” ranks as one of my favorite works. That’s not a hot take, as I would suspect most people are familiar with and rank high this particular story. I’ve numerous iterations of the play (both on stage and in film), and this interpretation, if for nothing else cracks the top rankings on atmosphere alone. Coen really brings his film to life, creating the feel of tragedy through his visuals in addition to his actors. “Macbeth” is unsettling and immersive from the outset, and once it sinks its grip into you, you can bet that that dagger is going into your heart as you sleep. This is the visual representation of something wicked this way comes.

I would highly recommend checking out “The Tragedy of Macbeth,” especially if you’re a fan of auteur filmmaking, bold visual choices, and of course, Shakespeare. The film doesn’t really work if you’re not on board for at least two out of three of those. Which two matter the most is up to the viewer, but there is a bit of a perfect storm of preference required to fully appreciate a film like this. It is really, really good, and were I able to see it sooner (you know my stance on this), it very well would have made my top 10 best films of the year.

It will not, however, make the best picture nomination list for me. Even though it has all the makings of an Oscar winning film; a beloved director, beloved actors, artsy fartsy visuals, and is out of A24 studios.

Strangely the thing that holds “Macbeth” back from the major categories like Best Picture is that it IS “Macbeth.” The Academy may be old and stuffy and largely out of touch with general movie going, and this film feels like the perfect candidate for an Oscar nom. But despite all of that, I just don’t see them honoring such an adaptive narrative that isn’t the first or last of its kind. Its creation may scream Hollywood love affair (and the visuals of “Macbeth” shout it from the roof tops), but giving top honors to a Shakespeare interpretation seems like a stretch despite everything else saying it should be a front runner.

The point is, “The Tragedy of Macbeth” is really good, and stands out as one of the most visually unique interpretations of a familiar story I’ve seen so far. Again, if you love any of key things I’ve mentioned, I would highly recommend you check out “Macbeth.”

Get Ready to “Fraggle Rock: Back to the Rock” [Trailer]

Renter Discovers Strange Noises Under House Was Family of Bears

Prev Next 1 of 2,629
Get the Latest News
Latest Videos
More Stories

Documentary About the Great Gene Wilder in the Works