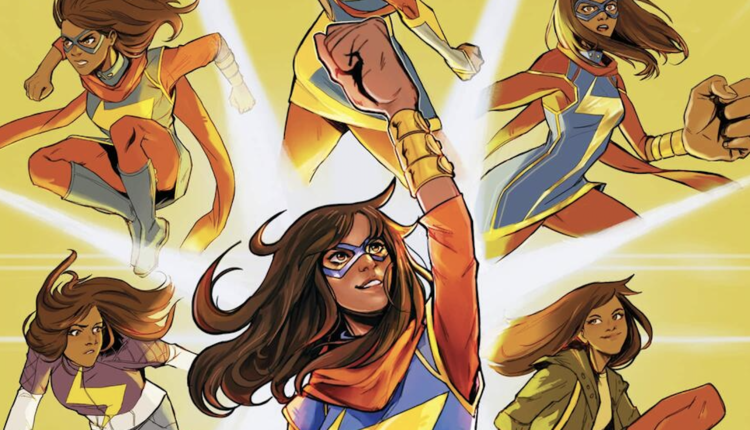 Kamala Khan returns in “Ms. Marvel: Beyond the Limit”

It’s been a rough few years for Kamala Khan. After discovering her incredible superpowers after her exposure to an alien mist, Kamala became Ms. Marvel, a street level hero protecting New Jersey while trying to survive high school, public infamy, and the everyday existence of a Pakistani Muslim girl in modern day America. In her brief time as a hero, Kamala has been a part of the Avengers, led teen superhero group the Champions, tussled with all manner of villains, and even traveled into space itself.

The stresses of being a hero are taking their toll on young Kamala, and it’s here where brand new mini-series “Ms. Marvel: Beyond the Limit” picks up. Our exhausted hero, staying a weekend with her physicist cousin in Chicago, is trying to take time to herself to refocus, regroup, and grab a handle on her crazy life. When a lunch date is interrupted by the intervention of a trenchcoated figure, Ms. Marvel accidentally disrupts a device that creates wormholes between universes, and the hero finds herself seeing more than just the quiet life she desires.

It’s good to see Kamala Kahn back. After her previous standalone series, Saladin Ahmed‘s “The Magnificent Ms. Marvel,” ended with issue #18 in February of 2021, Ms. Marvel has been mostly absent from stands. Her joyful attitude and identifiable personality is refreshing to read, and taking up the pen in this new limited series is writer Samira Ahmed. Samira’s script brings us a Kamala who has aged a little emotionally since her earlier stories. She’s still the wisecracking teen, but spends more time ruminating on her adventures and the things she’s been through in her short time as a superhero. The lure of a (comparatively) simple life like that of a physicist is drawing our hero, and Kamala is somewhat wistful. She’s growing up, and the weight of heroism is dragging on her.

Kamala may be a newer hero, but it’s good to see that her status quo as a character is already growing and becoming more. Ofttimes a new series of a comic character can feel like a soft reboot, a return to the same place the character was last time everything was just normal, with previous adventures conveniently retconned to the narrative sidelines. Samira Ahmed gives us a Kamala that is more. She’s learning, she’s there with her readers feeling the passage of her adventures. “Ms. Marvel: Beyond the Limit” has moments of casual downtime with Kamala that are simply fun to read, getting back into her head as she ruminates on her life, the amazing things she’s done, and when the story kicks off and the latest adventure begins, it’s great to see her back in action.

Samira Ahmed’s script is brought to life beautifully by artist Andrés Genolet, with great facial expressions, and bright, vibrant colors given life by colorist Triona Farrell. This first issue sees some awesome visuals of a strangely dreamlike Bollywood fantasy world that are some of the best pages, and a panel of Ms. Marvel encountering a glimpse of her multiverse alternate selves is a great moment.

“Ms. Marvel: Beyond the Limit” #1 kicks off into something larger in its final pages, with the reveal of a classic fan-favorite villain and some appropriately strange events beginning to twist Kamala’s dream of a quiet life once again. With snappy dialogue and some great looking panels, “Beyond the Limit” is a great return to the character, and I look forward to seeing more from Kamala and the multiverse shenanigans she encounters.

Find this and other titles at a local comic book shop near you.

“Doctor Strange in the Multiverse of Madness” Teaser Hits!