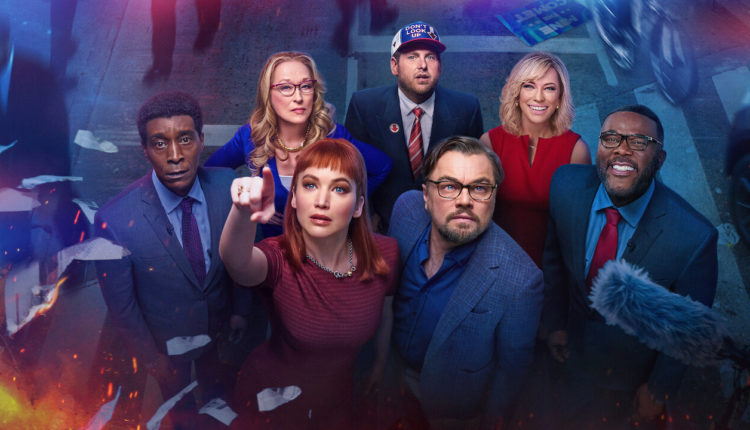 “Don’t Look Up” Scathing Satire, as Cynical as it is Funny [Review]

Given everything we’ve been through in the last few years- and the impending doom of yet another year of uncertainty- it can be hard to look at ourselves in the mirror. I mean that in the broader sense of our current cultural and political climate, which “Don’t Look Up” examines with scathing accuracy and satirical undertones. It must be said that writer/director Adam McKay has never been one for subtly, and is seldom keen on finding hope in the inevitable or tragic.

So it should come as no to surprise that “Don’t Look Up” is unflinching in its satire, covering everything from bubbly morning talk shows to green screen conspiracy theory pundits that all hits a little too close to home for some people. The film seems set on letting the hopelessness and dissent of our humanity take center stage, only allowing viewers to take solace in recognizing ourselves and what we’ve found to be our own light in the dark times. The only thing that sets this film apart from McKay’s other satirical work is that it is almost too timely for its own good.

McKay does a lot of things well, and up until now we haven’t seen him really tackle the absurdity of our human history while we are currently living through it. “The Big Short” was about the 2008 housing crisis that came out in 2015. “Vice” told the admittedly fictionalized story of Dick Cheney close to two decades after his impact on American history transpired. “Don’t Look Up” is deeply relevant because we are all still very much in the thick of its critiques. This can be really hard to swallow; a satirical film that highlights many of the things that have shaped who are while they are still shaping us by the day can’t be stomached by everyone. And sure, one could argue that an entire film who’s main take away is, “We’re all gonna fucking die!” seems a bit insensitive and clearly not something everyone (particularly critics) are willing to sit through. Especially when many of the very things that transpire in the film are probably happening in their lives as they sit down to write their thoughts about a fictionalized mockery of some of the more harrowing personal experiences.

I’m going to maintain that if “Don’t Look Up” was released similarly to other McKay films, like say, I don’t know maybe 2030 so we have a decade to live with the tragedies of our global pandemic, civil unrest, political division, and the brink of economic collapse, everyone would walk away singing its praises. “Don’t Look Up” hits a little too close to home, and you’d be forgiven for not really wanting to sit through something so scathing and generally bleak. But if you CAN stomach it, and recognize that the satire is commentary we need now rather than later, then you’re treated to really well acted, star studded cast of a sharply funny deconstruction of just about every facet of American life in the last 5 years. It’s funny because it’s true, and the lack of exaggeration needed in “Don’t Look Up” again makes the one two punch combination find its mark and hit hard.

The film follows two scientists Dr. Randall Mindy (Leonardo DiCaprio) and Kate Dibiasky (Jennifer Lawrence) who discover a comet heading straight for earth that will destroy the entire planet. Of course, the more they try to warn people the less people believe them, and the more the comet is transformed into a political ploys or billionaire power plays. McKay leaves no stone unturned in satirizing a global response to global catastrophe. Everything from bureaucrat to the president and her cabinet to the media to the social media to the guy in a truck on social media screaming that the comet isn’t real.

It’s unsettling and unfettered, but “Don’t Look Up” is also really funny and human. Even with the characters we’re suppose to like struggling to understand their place in the chaos. DiCaprio and Lawrence are a terrific pair, with both once again solidifying why they are two of the most sought after actors of our time. They are clearly modeled after real life people (particularly Dr. Anthony Fauci), and struggle to understand how to navigate the truth in a world that couldn’t care less about it. They are met with extreme ambivalence and manipulation from the current administration, with Meryl Streep as Madame President Janie Orlean and her son Jason (Jonah Hill), the Chief of Staff who perfectly embodying bureaucratic incompetence. Again, while it is abundantly clear who both Streep and Hill are suppose to portray in this fictional earth, they are never so direct that they become caricatures of those specific people. They’re funnier in their incompetence and irreverence because they could technically be anybody in power. It can’t be denied that “Don’t Look Up” modeled the entire political spectrum after the Trump administration, but the film is never so explicit that it can be considered a direct satire of a specific political party or candidate.

The film is jam packed with stars, and the big ones get a bit more to do than some of the more cameo style appearances. All of them are great, with the four mains in DiCaprio, Streep, Lawrence and Hill stealing the show at just about every turn. They are electric across the board; troubled, opportunistic and outright idiotic in their approaches to chaos, and Streep and Hill particularly make the best of their mockeries and are really, really funny. Cate Blanchett and Tyler Perry as morning talk shows are great additions, and sadly aren’t given enough to do as they desperately try to put a positive spin on everything and smile through it all. Again, it is almost too accurate in its depiction of morning news shows, but once you get over its relevance, you can sit back join in the satirical fun. The only person that doesn’t really do it for me is Mark Raylance as BASH billionaire tycoon Peter Irsherwell. He is basically Elon Musk, Jeff Bezos and Mark Zuckerberg all rolled into one, and it’s not that he’s bad in “Don’t Look Up.” Just that we’ve seen him be this guy before in “Ready Player One,” and his techy nerd weirdness doesn’t quite mesh with his money grubbing, sociopathic billionaire pursuit of more and more power.

The point is, the acting is great, and there is a constant rollercoaster of hope and despair as the comet gets closer and closer to impact. “Don’t Look Up” does have hope, too. Yes, it feels hopeless and pretty depressing, and it relentlessly mocks every facet of American society in such a way that does kind of make you feel like we probably aren’t going to make it out of this if we don’t get our shit together. But by peeling back every layer of our current responses with unwavering satire, McKay does get to the heart of the matter, and asks us to consider what’s really important in our lives. That conclusion is hard to get through, because the film really is extremely brazen in its mockery of humanity.

But we deserve it. All of it. Some have called “Don’t Look Up” easy-target political satire and even smug and insufferable and incapable of capturing the real horrors of our lives. But I would argue that that is exactly what we need right now. McKay isn’t concerned with dancing around the issues; he mocks what needs to be mocked and throws his hands up in the air and asks us to do better. And no, he doesn’t bother to solve the problems, either. Not every cautionary tale needs to have a solution. That’s what makes this film such a hard pill to swallow.

It doesn’t have the answers any more than we do, but that doesn’t mean we can’t learn from our current mistakes either. Darkly examining our human response to uncertainty isn’t new (both in life and film), but “Don’t Look Up” is a mirror that shows a reflection many of us aren’t comfortable with looking at. For me, the film is funny enough and well acted enough to be the kind of reflection we need right now. Just because it’s difficult to look at doesn’t make any of it any less true. And ya, we have kind of shit the bed across the board, so a fictional satire that sheds light on the best and worst of humanity is necessary to move forward.

McKay asks a lot of questions in “Don’t Look Up,” and almost none of them have any answers. But that’s ok, because what we’re really seeing is a list of problems that, if we aren’t careful can be our total and utter downfall. And that’s really what we’ve been trying to say to each other all along, isn’t it? Whether you’re apart of the Just Look Up grassroots campaign or the Don’t Look Up government anti-slogan, or apart of the arrow pointing both ways to show that we should just like, talk, man. (Note: this in reference to a very clever and hilarious satire of McKay’s own industry, purported by a sleazy, full on caricature Hollywood liberal director who has already made a disaster movie before impact and is played briefly by Chris Evans and it’s REALLY funny). McKay inevitably reaches the conclusion that whatever we’re doing isn’t working. And by examining it all with an unflinching and scathing eye, it does asks us to pause and see just how ridiculous we all are sometimes and we should maybe reconsider how we handle things, together.

It’s hard to find the hope in “Don’t Look Up,” but it is by design to be uncomfortable. I think what determines your overall enjoyment of the film is whether or not you’re willing to laugh at that discomfort while also recognize that McKay may be out of line, but he’s right.

We need to look up, pay attention, and get it together. Otherwise yes. We’re all gonna fucking die. That’s according to “Don’t Look Up,” at least. And your enjoyment of the film is predicated on how that all sits with you.

“Don’t Look Up” is in limited theatrical release, and will be available to stream on Netflix on December 24th, 2021.

Does the Cooling Pad Drain the Battery?