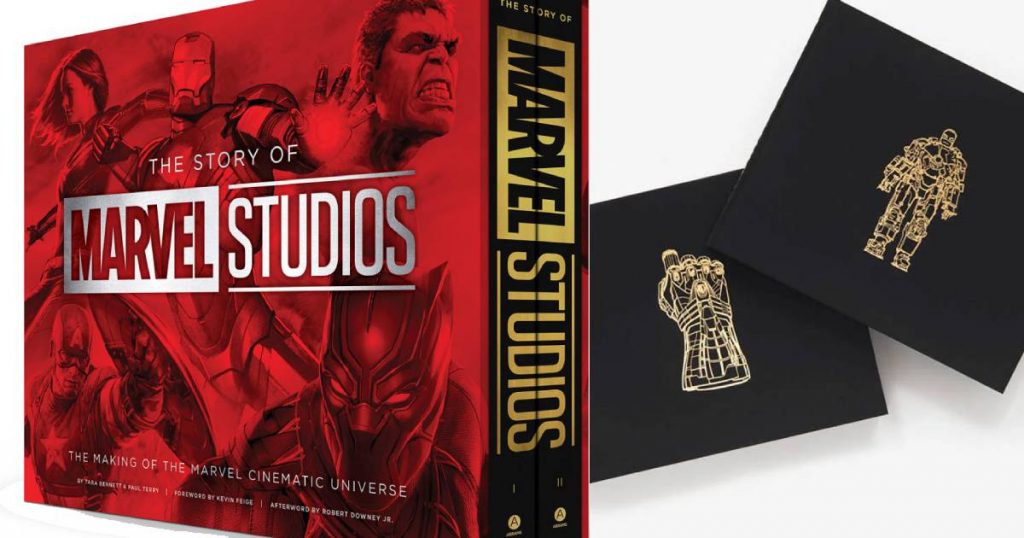 If you’re a cinephile and also happen to be a big Marvel fan then this is one book you need to put on your Christmas wish list. “The Story of Marvel Studios: The Making of the Marvel Cinematic Universe” was just released, and covers everything to date. It has tons of beautiful behind the scenes pictures you won’t find anywhere else and tells the story of the studio. It’s so extensive it comes in a nice box set with two volumes!

“The Story of Marvel Studios” is the first-ever, fully authorized, all-access history of Marvel Studios’ creation of the Marvel Cinematic Universe, as told by the producers, writers, directors, concept artists, VFX artists, cast, and crew who brought it to life. Year-by-year, project-by-project, the studio’s founding and meteoric growth are described through detailed personal stories, anecdotes, and remembrances of noteworthy challenges, breakthrough milestones, and history-making successes. Together, these stories reveal how each of the films evolved into one ongoing cinematic narrative, as coauthors Tara Bennett and Paul Terry (“The Official Making of Big Trouble in Little China,” 2017) chart the complete production history of The Infinity Saga’s 23 movies (from 2008’s “Iron Man” all the way up to, and including, 2019’s “Avengers: Endgame” and “Spider-Man: Far From Home“).

Bennett and Terry were granted unprecedented access to Marvel Studios, which led to this years-in-the-making tome containing personal stories from more than 200 interviews, including every Marvel Studios producer; MCU writers and directors; the stars of The Infinity Saga; concept artists, costume designers, composers, and the talents behind the MCU’s dazzling visual effects; and more. Featuring previously unpublished behind-the-scenes photography and archival production material, as well as personal photos and memorabilia from cast and crew, “The Story of Marvel Studios” is the essential, collectible chronicle of how the Marvel Cinematic Universe was brought to life.

• 512 pages chart the entire history-making story of Marvel Studios—from its inception, through Phases One, Two, and Three, and to the dawn of Phase Four

• Featuring more than 200 interviews with the studio’s staff, cast, and crew for all 23 movies in The Infinity Saga

• Includes more than 500 production photos, plus never-before-seen filmmakers’ archival materials and personal memorabilia from the cast and crew

Why You Need This

This is THE most comprehensive book about the Infinity Saga that will ever be released. Tara and Paul having gotten this type of access for this soul purpose makes this book a must have. If you know anyone who loves Marvel this would be a great gift for them. It’s one of those books you keep on the shelf and pull out when company comes over to show them all the cool stuff inside. Or one that you keep on the coffee table because you can’t seem to put it down.

You can order your own copy of The Story of Marvel Studios: The Making of the Marvel Cinematic Universe here.