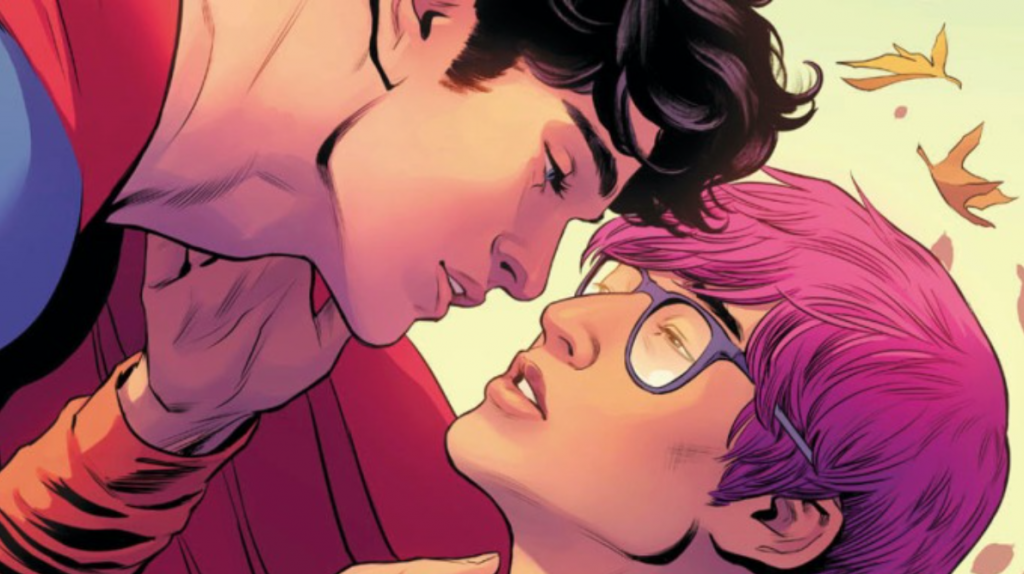 October 11th is National Coming Out Day. For many it’s a time of celebration for not only their own journeys but the journeys of so many others. DC Comics has revealed that “Superman: Son of Kal-El” #5 will be showcasing a wonderful romance between it’s main character and another man. That’s right, Jon Kent (Clark Kent and Lois Lane’s son) is bisexual!

They released some art that’ll be featured in the November 9th issue of the comic:

When it comes to representing LGBTQ+ in pop culture, there is usually some backlash. But those are usually the people who are uncomfortable with anything outside of hetero-normal depictions onscreen or in their media.

Just like his father before him, Jon Kent has fallen for a reporter. After initially striking up a friendship with reporter Jay Nakamura, he and Jon become romantically involved in the pages of SUPERMAN: SON OF KAL-EL #5 from writer Tom Taylor (DARK KNIGHTS OF STEEL) and artist John Timms (HARLEY QUINN). Following a scene where Superman mentally and physically burns out from trying to save everyone that he can, Jay is there to care for the Man of Steel.

This run of “Superman: Son of Kal-El” so far has been one to push limits and has covered some very progressive issues. Things like battling climate change, school shootings and more have been addressed by the book. Since it’s debut in July of this year they have consistently kept us going back to read each issue. It’s a great comic that is actively teaching not just kids but adults too what they should be aware of. Whether you agree or disagree with this new push, that’s your deal.

“I’m incredibly honored to be working beside Tom on the SUPERMAN: SON OF KAL-EL series showing Jon Kent tackling his complex modern life, while also saving the world from its greatest threats, villains and menaces,” said artist John Timms.

“We couldn’t be prouder to tell this important story from Tom Taylor and John Timms,” said DC Chief Creative Officer and Publisher Jim Lee. “We talk a lot about the power of the DC Multiverse in our storytelling and this is another incredible example. We can have Jon Kent exploring his identity in the comics as well as Jon Kent learning the secrets of his family on TV on Superman & Lois. They coexist in their own worlds and times, and our fans get to enjoy both simultaneously.”

Here at Nerdbot, we’re happy that this is happening. We’ve all just added this book to our pull list (if it wasn’t on there already). As always, we ask that you support your local comic shops.