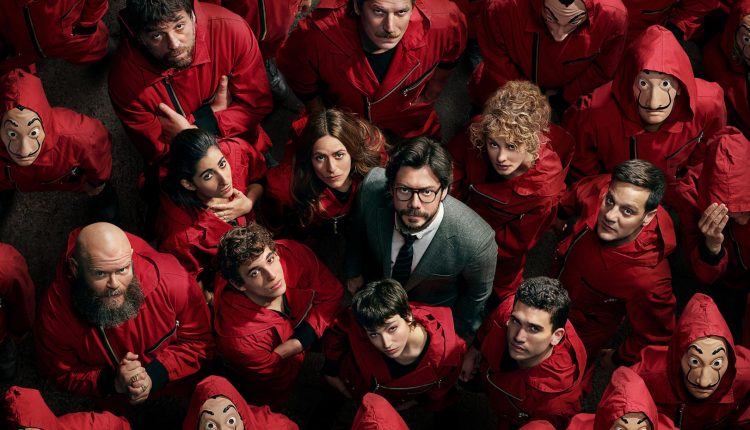 If you’re not fully invested in “Money Heist” yet, stop reading this review and spend the rest of the Labor Weekend binging the show from the beginning. You are truly doing yourself a disservice by not watching this incredibly addictive Netflix show. This week, Netflix released part 1 of “Money Heist” season 5 which is set to be its final season. Spain’s favorite thieves are in the thick of it now, as this final season pits our anti-heroes against insurmountable odds.

Even for those of us who have watched them outsmart and outlast the worst of it, season 5 makes it very clear that this is indeed the last time we will sing “Bella Ciao” in triumph of success. “Money Heist” continues to deliver on everything fans have come to expect and love about the show, with the acting and story unfolding at a beautiful pace and packed with action, heart, humor, and heists. This is the best show you’re not watching, and while watching it end in real time is bittersweet, this latest entry still manages to stay fresh and engaging, leaving viewers on the edge of their seat every single second of every single episode.

“Money Heist” season 5 picks up exactly where season 4 left off. Don’t worry if you don’t remember (as it’s been quick a bit of time since season 4 concluded), the show does a good job in bringing you up to speed with their recap, as well the show kind of starting with the big season 4 ending. The group is now left mourning the loss of one of their original heist members, while also deteriorating mentally after having been trapped inside the Mint of Spain for over 100 hours. The stress and constant obstacles of the heist seems to continue to weigh heavily on everyone, and now two major things have happened that make everything even more complicated than every before: The Professor has mysteriously gone radio silent and the army has taken over the inevitable siege. For both our heroes on the inside and the police and army outside, “Money Heist” season 5 makes it clear from the outset that this. means. war. We’ve seen these characters in a bind before, but nothing can prepare them or viewers for what is about to unfold.

“Money Heist” does so many things right it’s downright criminal (pun intended) more people are obsessed with it. The show beautifully filmed, with gorgeous cinematography and action set pieces that create the sense of claustrophobic dread that surrounds every single person trapped inside the mint either on purpose or circumstance. There is never a dull moment, and the use of corridors and surroundings create some truly wonderful and intense action sequences.

Season 5 has the perfect balance between over the top action and realism, relishing in the creativity of blowing things up in a close quarters battle without every traveling into eye roll moments that take you out of everything. It continuously uses the action and tension to have you constantly saying to yourself, “how the hell are they going to get out of THIS now?” But “Money Heist” season 5 adds yet another layer to its already nuanced narrative: there is definitive sense of finality throughout the entire show.

This is not always defined by key characters dying necessarily, but rather through our own discoveries of their humble beginnings, friendships and family ties that drive and bind all of them. It is also through their own realization that everything may not work out like it did last time, and while they don’t quite lose complete faith in The Professor and his plan, many of our heroes slowly begin to wrestle with the fact that they’re not all getting out alive. It is harsh reality that sets in both on screen and for viewers, making season 5 one of the most intense and emotionally draining experiences of any season to date. I don’t mean any of that in the pejorative sense either; the show is so damn good it pulls viewers in and demands that you too wrestle with the emotions of every character. “Money Heist” demands your full attention, puts the foot on the gas and never, ever lets up.

The last big compliment to the show (in addition to how wonderful the entire cast is) is the writing. “Money Heist” is intentionally melodramatic and poetic, written in a kind of Old English Spanish meant to be a bit over the top in its delivery. Were the show in less capable hands, this could come off as pretentious and pandering and could easily take you out of the story being told. Luckily, creator and writer Alex Pina is masterful and purposeful in his creation, and never lets anything get away from him. The language never gets in the way of the story, allowing this to be both visually and narratively beautiful. Yes, people take small breaks during lulls in their gun fighting to have conversations about their relationships, fears, doubts, and memories, but it is never out of place or without merit, and always ties into either the character overall or the story at hand. The depth with which each character is written and performed is truly amazing, with absolutely no one being one note or one dimensional. Everyone is a fully realized character with emotions and lives that are explored in carefully crafted ways throughout “Money Heist.”

It is astounding that “Money Heist” is as good as it is, especially after this long and heading into its final season. Landings are hard to stick for even the best of shows, but season 5 part 1 proves that the creators themselves are the ones choosing to end it where they feel the story should rather than a studio forcing them to make more unnecessary episodes or canning the show early and forcing them to figure out the ending on the fly. “Money Heist” season 5 knows exactly what it’s doing even if the characters and heroes don’t, and as everything unravels beyond even the control of The Professor, WE know that something is coming that will either end in triumph or hopelessness. This first have the season leaves that to be discovered, as the final moments have both victories and tragedies, ending on a note that makes viewers filled with countless emotions and no clue how the hell anyone is getting out of this one alive.

“Money Heist” gets just about everything right, and I can’t stress enough how much you should be watching this show. It is easily one of the best discoveries I’ve ever found on Netflix, and while I’m excited to see how it all ends, I’m devastated to realize while watching season 5 part 1 that this is, in fact, the end. Don’t miss out on this show. If you need to catch up, start from the beginning. If you didn’t know there were new episodes, here’s your notice. And if you’re scared to finish it, I understand but I assure it’s worth the watch even if you don’t want it to end.

“Money Heist” season 5 part 1 is packed with everything that makes the show so damn good, and it looks to be a glorious ending no matter what happens. Just, without spoiling anything, have some comfort snacks and a box of tissues on stand by, especially as you get further and further along into the final episodes.

Trust me, you’re gonna need it. You can catch the series exclusively on Netflix.

How To Grow Your Small Business With Instagram Marketing?