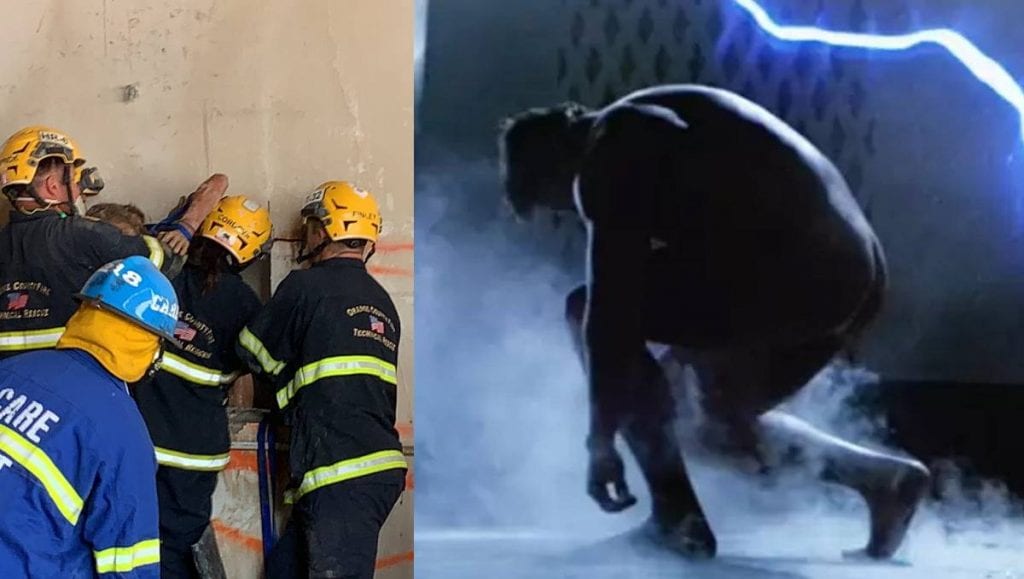 It seems like something out of a movie gone wrong. In “Terminator” we see Arnold arrive fully naked as he searches for John Connor. Luckily he makes it into an area where he wasn’t immediately stuck. But what if a time traveler from the future didn’t know where they were going? What if instead of transporting themselves somewhere safe they appeared say, between two buildings. That’s what some people are guessing at as to how this woman became stuck between two buildings in Santa Ana.

Yes it’s a joke, but so far there’s no other explanation yet, that’s what I’m running with.

Authorities worked to release a naked woman in Santa Ana July 13th after she became stuck between two buildings. They had to call in the fire department to cut her out of the area. Luckily she was ok but they are still trying to figure out how she got there. The area where she was stuck was no more than a foot wide.

At around 2p.m. workers in the area heard a woman calling for help. They alerted the Santa Ana Police department and they were able to find her and get her out by 4 p.m. They planned to have her medically assessed but no further details were immediately available about her well being. Commenters assumed that this was either a mental health issue or drugs as to how she got there. Another person said maybe she jumped from above down into the crack. Truth is we won’t know until they release more information.

We’re grateful that she was able to be cut out of the wall unharmed. We’re also sure she’s totally a normal human being and not a terminator… or a time traveler… probably.