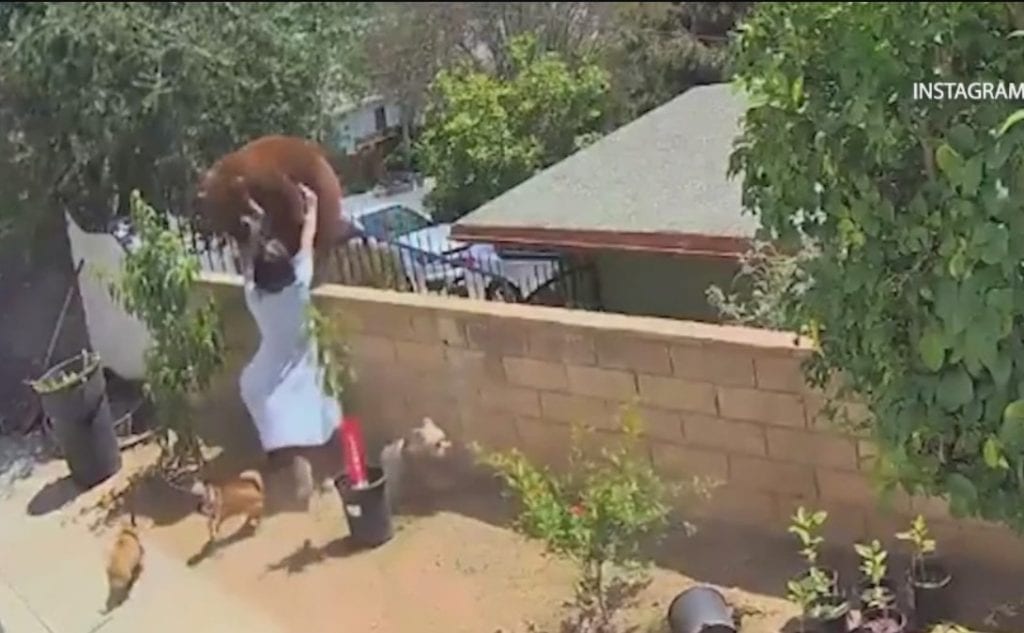 Girl Pushes Bear Off Backyard Wall to Save Her Dogs

[Editor’s note: please do not approach, touch, OR PUSH any bears for any reason, ESPECIALLY a mama bear with cubs in tow.]

I always say that if anything were to go after my animals, they’d get a punch in the face. This girl from San Gabriel Valley, California is one of my people because she gets it. 17-year old Hailey Morinico ran out to save her pets as soon as she saw what was going on. The entire thing was caught on camera.

Just after 2:30 pm, a bear and two cubs walk along a brick wall in the girl’s backyard. Three of the family’s dogs start to run out and bark at them. The biggest dog jumps up to the bear and it swats at it. Then, Hailey runs to action and pushes the bear off the wall, picks up the two small ones and runs inside. The bear gets back up on the wall after the teen runs away.

“I see the bear, it’s grabbing my dog, Valentina, and I have to run over there. She’s a baby,” Hailey said. “And the first thing I think to do is push the bear. And somehow it worked.”

Hailey warns others not to do what she did. She was able to get away with a sprained finger and a scraped knee but others may not be so lucky.

It is important to say that you should always report these kinds of events to animal control. She was very lucky but if the bear would have hurt her the bear could have potentially been put down. It appears that the bear could have just been trying to protect her cubs from a potential threat as well.

Again, do not approach or touch any wildlife for any reason. Call your local department of fish and wild life, or forestry service.