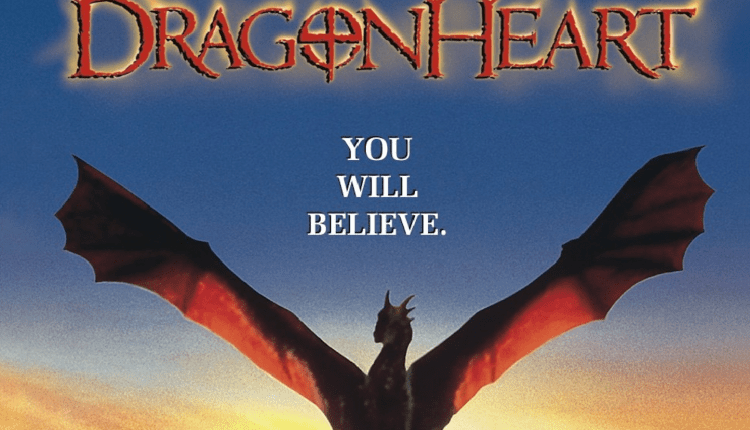 You really have to hand it to a film like “Dragonheart.” In a world of adaptions, remakes, reboots, and tired tropes, a film like this comes out, and is the epitome of watching movies for fun. You know, that thing we should all be doing to begin with but can’t because every new movie requires 15 years of lore and mythos before we ever get an official trailer? Here, creators Charles Edward Pogue and Patrick Read Johnson deliver a brand new fantasy world that is pure, adventurous fun. Not source material, no desperate need to create an unwarranted franchise (although they made like 4 more after this but that was never their intention and you can feel it) and no unnecessary self indulgence.

“Dragonheart” proves that you can make a fun, singular, original fantasy adventure and have it be nothing more than that. Not everything needs to have huge looming moral complexity or nuanced character studies of the human condition. Not every movie needs to make a big statement about society. Sometimes you can just tell a simple story about a knight and his dragon. While this may not necessarily be a great film, and though revolutionary at the time, the incredible Phil Tippet effects don’t *really* hold up. But, they really don’t make them like this anymore, and “Dragonheart” has more of what’s missing in a lot of film (even great ones) today that serve as a stark reminder we need more of it.

Don’t be too hard on yourself if you’ve never seen “Dragonheart.” It was a critical misfire despite being a box office hit in 1996, but it still managed to fly under the radar of most. The film really is a standalone original. It draws from the vast well of fantasy adventure, sure, but there’s no graphic novel series you have to read before, it’s not adapted from a bad YA novel series turned worse film franchise. It exists in both a world familiar and a whole new one, building its medieval world from the ground up. This makes for a truly unique experience, even if some moments cause the grown up in you to scoff and eye roll at the ridiculous of it all.

When stripped away of its award-winning special effects and high profile talent, it’s hard to imagine that “Dragonheart” was made for anyone over the age of 12. It is truly a simple tale of a knight and his dragon, and packed will on the cheeky jokes and plays that such a silly premise would entail. And yet, it is perfectly fine with that. You know me- I am champion for unapologetic filmmaking and will always give a pass for anyone who owns their schtick. “Dragonheart” not only owns it, but revels in it.

They’re having as much fun making it as you should be watching it. Given its plot, “Dragonheart” could’ve very easily slipped into something unimaginative and redundant. But because it knows what it is and fully embraces its own silliness, we are given a truly immersive fantasy adventure that requires nothing more than to sit back and relax and enjoy the show. “Dragonheart” really is just good old fashioned fun at the movies. It also packed with recognizable faces and voices, many of which were still in the beginnings of their long standing careers. People like David Thewlis as Einon, Dina Meyer as Kara, and of course the always fiendish Jason Issacs as Lord Felton. Hell even Julie Christie shows up in this thing as Queen Aislinn. It’s a star studded cast and this is all before we get to the two main protagonists, Dennis Quaid as Bowen and Sean Connery as the voice of Draco the dragon.

The unlikely pair are a blast together, constantly bickering like an old married couple as their shaky alliance naturally becomes a true, undeniable friendship. While some point to the voice of Connery being too iconic for its own good and holds Draco (no, not Malfoy) back from becoming his own realized character. I don’t know that I full agree. While I certainly understand this criticism as Connery’s voice is undeniably him in both demeanor and character, there is a true charm and playfulness that makes Draco come to life behind the then revolutionary digital dragon. You may recognize the voice, but Connery like everyone else understands exactly what kind of film is being made here, and seems to be enjoying himself as much as the rest of them. There is surely Scottish gravitas, but there is never a moment where you feel as though “Dragonheart” has become 007. Fun fact: The part of Bowen (Quaid) was specifically written for Liam Neeson, but the studio at the time didn’t believe he could pull off an action hero. It’s hard to wrap your head around, but yes. Neeson lost an action role as a 10th Century England Knight bantering and fighting alongside a Scottish dragon because they didn’t think he was action hero material. Quaid ended up being a last resort choice, one that even creator/writer Johnson was never fully on board with.

The special effects have their moments both good and bad. There are times were you know damn well this was made in the mid 90s, and fault of our current technological advancements rather than a folly of “Dragonheart.” And then there are times where it looks really good even for the time period. Helmed by special effects legend Phil Tippett and ILM (Industrial Light and Magic), there is quite a lot that works here even 25 years later. For the time, his dragon come to life was revolutionary, and further cemented him as one of the best special effects legends out there. There are some truly solid visuals in “Dragonheart” and while you may feel yourself noticing the dated moments, there are plenty that stand the test of time and solidify the film as a true testament to visual capabilities in film.

“Dragonheart” is a rare breed of film, one that puts our ideals of what movies are to the test. We say we want original films, but rarely show up for them and in turn complain about the reboots and remakes and franchises we continue to shell out money for. It’s the great irony of the industry, and it manages to be the kind of thing we really do need more of. It holds true to its genre, provides a simple but effective formula, and really is a good time at the movies.

We truly need to show out for more things like this, films that invest the same amount of care and concern as blockbuster adaptions for new and unique stories. I know we won’t, and when we do they don’t make any money, but “Dragonheart” is about as close as you can get to having your cake and eating it too in Hollywood.

We could learn a lot from “Dragonheart.” Not the long list of 5 unnecessary sequels which pretty much goes against everything I just said, but it is truly a fantastic fantasy film that, dare I say it, has a lot of heart.

I will not apologize for that pun, either.

“Dexter” is the Man ‘Around Town’ in New Teaser Trailer