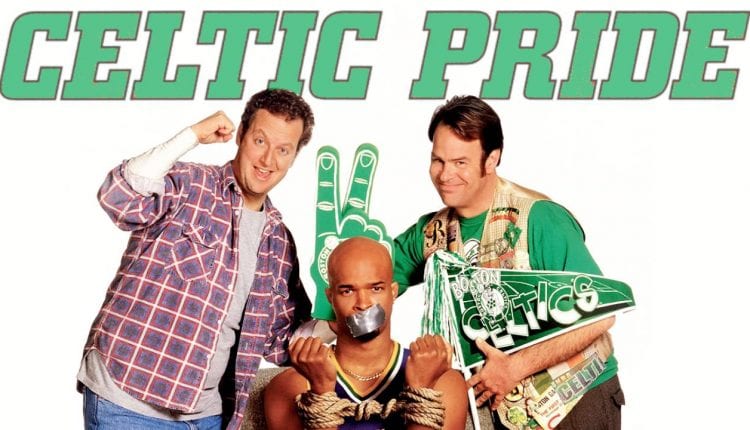 Full disclosure, this review and look at 1996 “Celtic Pride” is probably going to be shorter than others in this series. Partly because there’s just not a whole lot to say about the film overall as it pertains to the framework that we’re examining it through, but also because I’m still recovering from my second dose vaccine side effects and don’t really have all my mental faculties about me…I’m fine, by the way; a small price to pay for salvation.

“Celtic Pride” is a very strange film, one that struggles to define itself as a cohesive sports parody and buddy comedy, attempting to do both but constantly struggling to do either justice. It shows small glimpses of potential, but the longer it goes on the further and further those moments come. It’s hard to pinpoint just where it goes so wrong when on paper, it probably should be a knockout comedy that stands the test of time.

For all its faults though, I’m not entirely convinced “Celtic Pride” is a bad movie so much as it’s a lot of good ideas executed poorly.

The first thing that stands out most about “Celtic Pride” is that it’s written by Judd Apatow. Boy, does it show. It feels very much like a young Apatow who hasn’t quite found his voice as he would later with something more along the lines of say, “The 40 Year Old Virgin.” Knowing that it is an Apatow scripts speaks volumes about how this flick functions as it isn’t too far off from the rest of his filmography.

Starring great comedic actors in Dan Akroyd, Daniel Stern, and Damon Wayans all of whom are more than capable of solid improv, centering on a seemingly normal person with an abnormal affliction (a 40 year old virgin, a struggling up and coming comedian, a one night stand haunting an otherwise successful woman) who’s personal life is turned upside down with a little help from their friends or circumstances. And yes, there is always a family (husband, wife, girlfriend, child) that gets displaced from whatever this person is doing that needs to be corrected.

In the case of “Celtic Pride,” Daniel Stern’s Mike O’Hara is a sports fanatic, obsessed with his home basketball team, the Boston Celtics. This dominates is life, displaces his wife and son, and leads to him and his friend Jimmy O’Flannery drunkenly kidnapping the Utah Jazz’ star player Lewis Scott (Wayans). And before you even ask, yes. The third act goes off the rails and doesn’t really feel like it’s how anything should have ended.

This should all sound really familiar, because it’s quite literally the basis for every single Apatow film ever written to date. Some are obviously better than others, and “Celtic Pride” is obviously a very young version of otherwise solid writer. He’s working out the kinks here, but the film ends up suffering overall for this behind the scenes discovery. All three stars are doing all they can with what they are given, with Stern really being the stand out among them. While he may not be dominating the box office much these days, Stern had a knack for believable slapstick, and basically shoulders all of “Celtic Pride,” and carries the film through.

Without the works of its stars, “Celtic Pride” never becomes a fully developed sports parody which it seems intent on being. Nor does ever really become a strong buddy comedy that happens to be about sports. It wants to criticize sports fanaticism but opts to pick and choose when it wants to take it all to the extreme. It parodies when it wants to instead of embracing everything that is deservedly silly about sports fanatics and sports in general. There are some generally funny moments that demonstrate sports absurdity, like when the entire section of fans start switching seats and moving around in specific order in hopes to bring their losing team back to life. It’s this sort of playfulness and parody that “Celtic Pride” shines, but ultimately trades it all out about half way through once it becomes a caper mishaps film. It’s an incredibly uneven film, and never quite reaches the potential that it should on paper.

The biggest problem with “Celtic Pride” and its lowly 9% rating on Rotten Tomatoes is that despite everything wrong it (and there’s a lot I didn’t even mention here), it’s still a generally likable film. It’s not as great as it should be but it’s also not as bad as many critics have said it is, either. It just kind of exists as a 90s film you forgot was made or maybe saw once and never really thought to go back to it 20+ years later.

So where does that leave “Celtic Pride” on the deserving scale? While I do recognize every harsh critique of the film as valid, I come to a different conclusion about where it should fall on its percentile. Look, I’ve seen a LOT bad films this year, many of which are far worse and exhausting to get through, and while this one may miss the mark on much of what its trying to do, it doesn’t compare to the many, many bad films that more than deserve their place on the worst of the worst list.

So no, “Celtic Pride” doesn’t deserve its low rating on Rotten Tomatoes. There are far worse films that should take its place, and many others that are rated higher that should be taken down a few points. It maybe tops the low 30 percentile, which is probably more fair to its hits and misses.

If for nothing else, Daniel Stern deserves at least a 20% boost all to himself, as it’s him that remains the one thing that makes this movie as likable as it turns out to be. It may not be a great film. Hell, it may not even be a GOOD one- but it most certainly isn’t the worst film that any of the stars or writers have been a part of.

For that, “Celtic Pride” is deserving of a missed second free throw and shouldn’t be remembered as an air ball.