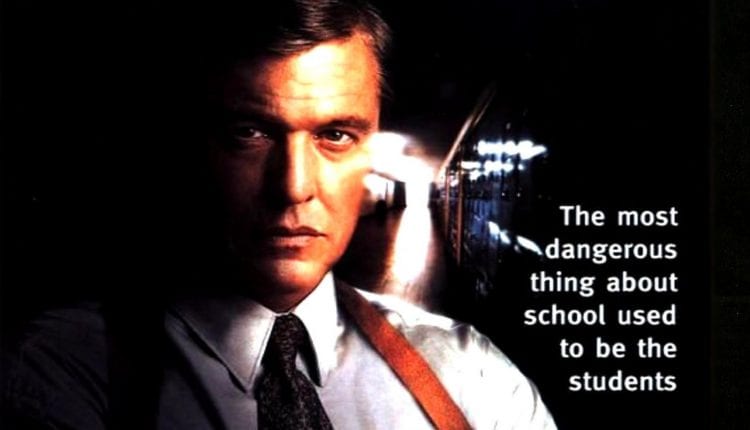 I don’t know what’s more surprising: the fact that “The Substitute” is an actual movie or that it spawned not one, not two, but THREE sequels. There is no logical reason for this film to exist beyond its first outing, as its barely a serviceable guilty pleasure let alone something that deserves to be made into a franchise. Nevertheless, that’s Hollywood for you.

It’s also classically 90s- a film about gang violence and the failures of public education before we had any competent understanding of either. It also paints the war on drugs in broad strokes, failing to grasp the nuance and complexity of every facet of subject matter it touches on to move the plot forward. And yet, “The Substitute” isn’t a bad film as much as it’s a product of its time. Dated at 25 years later sure, but still does just enough to be enjoyed.

Is it believable? Absolutely not. Is it plausible? Not in the slightest. But it is enjoyable? I remember enjoying this film a lot as an impressionable teenager, and watching it again as adult, I’d have to say yes, it’s enjoyable so far as these things can be enjoyed.

Jonathan Shale is an ex mercenary who, after a covert op in Cuba is disavowed by the US government and sent home without any recognition. His girlfriend Jane Hetzko is a teacher at an inner city school wrought with gangs. After she seemingly disrespects one of the leaders of the K.O.D, she is attacked and left injured. Shale decides to infiltrate the school and ends up uncovering a drug ring that goes deeper than he ever thought possible. With the help of his fellow team, the boys will go to war with the K.O.D as well as some of the biggest drug lords in Miami.

Here’s the thing about “The Substitute.” You’ve seen this movie a thousand times, especially in the 90s. There is absolutely nothing unique about the film, as it essentially exacerbates every gangland and high school trope you could possibly imagine. It is wildly basic, surviving on a few key players that are doing the most with very little. I mean, come on. Imagine a film that tries to ship Marc Anthony as a cut throat gang leader willing to murder a teacher over a simple reaction to his own goons’ harassment.

That’s a hard sell for any film in any era, and yet, “The Substitute” STILL manages to be fun to watch. There are so many things wrong with this movie I legitimately can’t put my finger on why I don’t absolutely eviscerate it, start to finish. For all the tropes and unimaginative ideas that are crammed into this film, it does all of them just good enough to be a decent watch.

The success of “The Substitute” lies mainly with Tom Berenger as Shale and Diane Verona as Hetzko. Verona was the quintessential every wife of the 90s, and their relationship here is believable and true despite being the least focused part of the film. There is genuine chemistry there, so much so that as unbelievable as a mercenary going undercover as a substitute teacher to exact revenge on her would be attackers is, they somehow make this seem pretty normal for how well they work together. Likewise, Ernie Hudson as corrupt principal Claude Rolle is extremely devious and charming. So much so that you kind of wish he would play a villain role more in a better film with an improved script. Unfortunately, that’s about all that works here, as pretty much every other face and character (yes, including Marc Anthony) is a little more than filler. Their primary goal is to round out the cast of characters necessary to make a film like “The Substitute” exist, but never really doing anything more than what the script calls for which is minimum effort at best.

The subtle racism, homophobia, and misrepresentation of inner city schools cannot be overstated in “The Substitute.” I’m all for giving certain things a pass for existing in a certain time, but damn is it jarring to watch just how bad all of it was 25 years ago. The ease with which slurs and stereotype portrayals of POC are baked into the very fabric of the plot is astounding, but also not limited to this film alone.

The 90s were filled with films like this, as Hollywood is also quick to jump on making movies about things they don’t fully understand but are currently dominating the cultural media headlines. “The Substitute” is very much a victim of this, despite its well intentions. The idea that Shale can simply solve gang culture by simply saying, “What about your kids?” and most of the class admitting they have children (yes, this is a very real scene in this movie) is far less believable than a corrupt principal funneling drugs through the school via school buses and storage facilities.

“The Substitute” is a dated, run of the mill action film that harkens back to a bygone era of movies like this being better off forgotten. It does a ton of things wrong, but what it gets right is just enough to make the film more enjoyable than cringe. I honestly can’t fault anyone for liking “The Substitute.” It’s as fun as it is problematic, and as silly as it is, desperate to be taken seriously. I don’t think I will ever be able to rectify the fact that there is more than one film in this franchise, as no one could possibly sit through this film and think, oh ya, dollar signs baby! We got ourselves a franchise! It is a completely contained story, one that barely works on the premise it runs on, and does just enough to be watchable.

“The Substitute” is a film you catch on cable once in a while and in a moment of nostalgia, don’t turn it off right away. It is by no means one to seek out or by god, actually pay for! It’s such a weird film for me, because I don’t outright hate it even though I probably should, but I don’t love it the way that the impressionable teenager with nostalgia googles wants to.

“The Substitute” just kind of exists, not really making a case to do so or be erased from the IMDB catalog entirely. At best, it’s decent enough action film. At worst, it’s a substitute for better films.

Crazy Footage of a Tree Decimated By Lightning Goes Viral