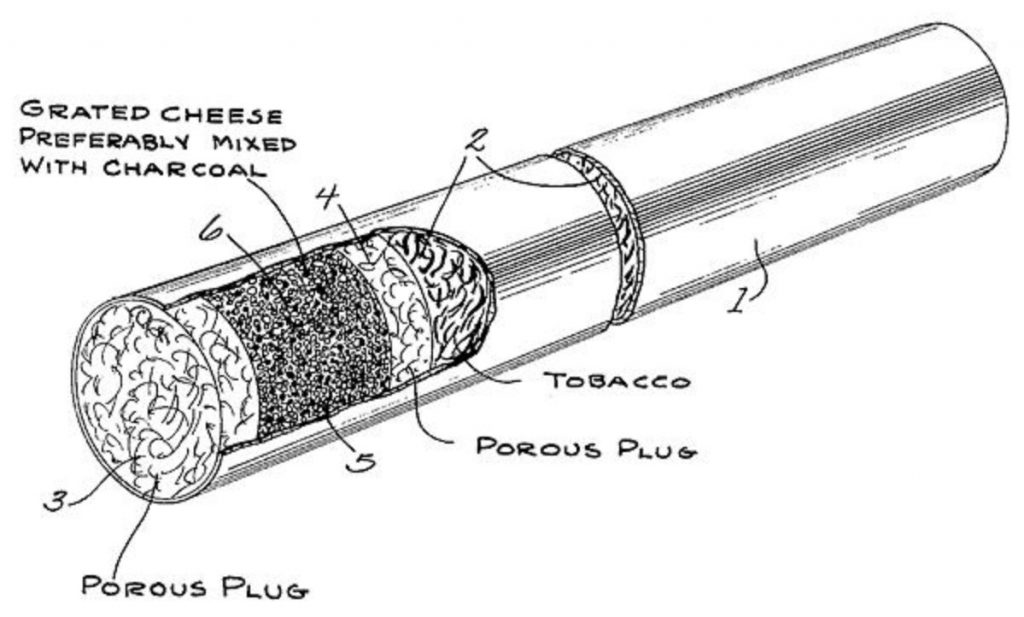 Cheese Filtered Cigarettes Were Patented in the 1960s

There’s been an article uncovered from the 1960’s that talks about how a cheese filtered cigarette could filter out 90 percent of the tar. Professor Henry Lardy from Wisconsin(go figure) was prompted to start researching and testing this after a wholesale lumberman Stuart Stebbings brought the idea to him.

In 1966, Stebbings patented the idea and was keen on creating these new filters. He came up with the idea to combat the great dairy surplus that was happening at the time. They had even figured out a way to cure the cheese so that it would not have a taste.

This invention contemplates the provision of a cigaret filter which comprises particulate milk derived cheese used alone or in a mixture with particles of charcoal. By preference, the charcoal has been acid washed. In order that the cheese may comprise small and well defined particles between which the smoke can pass freely, it is preferred to use a hard cheese as exemplified by Parmesan, Romano or Swiss cheese. Aged cheddars and other hard cheeses may also ‘be used, particularly if partially dehydrated to facilitate grating, it being important that the cheese be particulate.

Stebbings was also credited with creating a hybrid cheese/chocolate candy because he was a “diabetic with a sweet tooth.” He and his wife Bertha created a combination with Swiss cheese and chocolate and reduced the sugar content by 40%.

Editors note: Nerdbot in no way is advertising or promoting the use of tobacco products with this post. We just thought it was interesting to know.