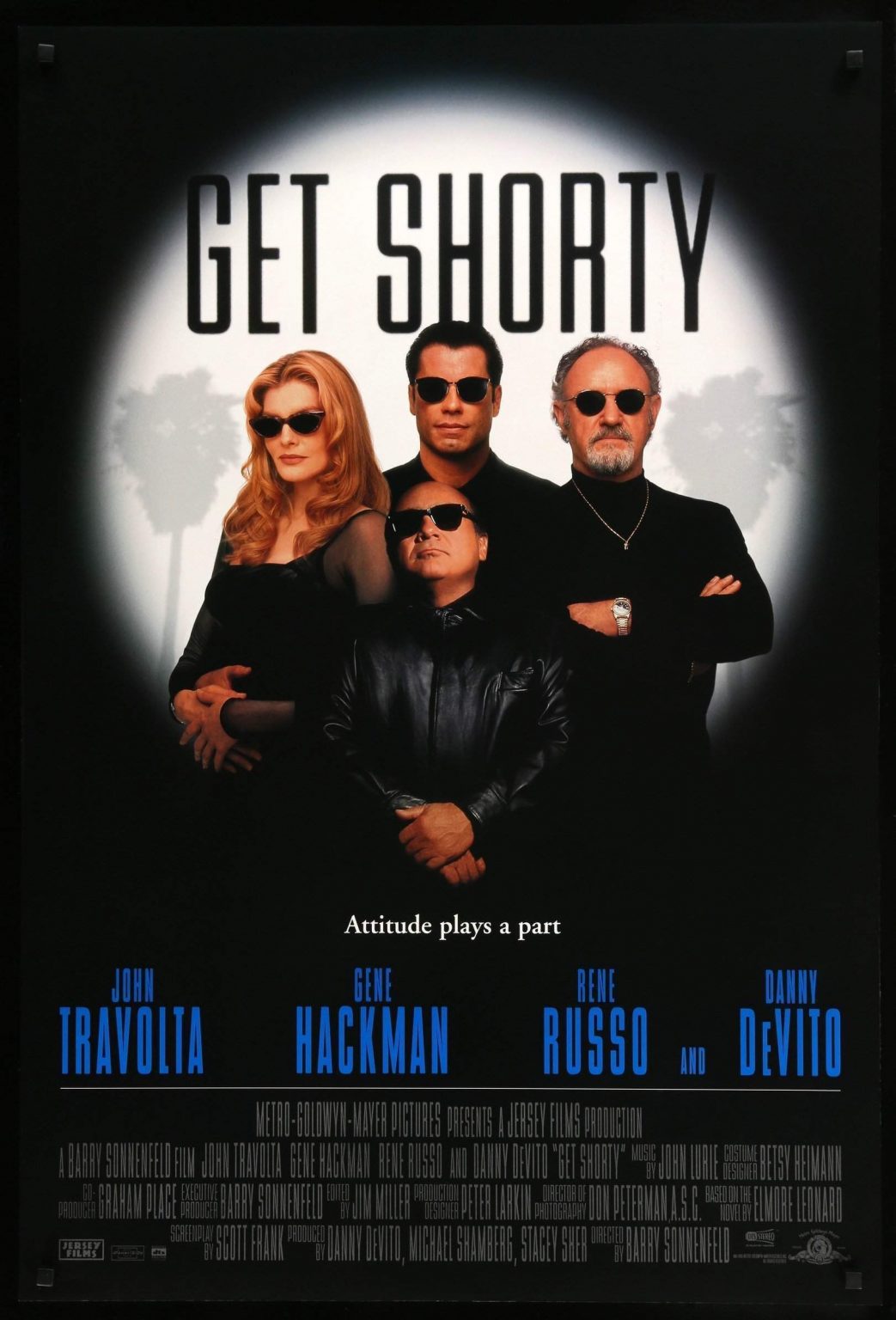 Perhaps more surprising than “Get Shorty” turning 25 years old this month is that it’s taken me 25 years to actually sit down and watch it. The gangster thriller/comedy fits every criteria of a film I would enjoy. And yet, it has eluded me for quite some time. Sporting a star studded cast and a perfectly balanced script, “Get Shorty” is both a love letter to and a satire of Hollywood.

I will admit, it’s strange watching this film so late in life, as it becomes impossible not to see where other films like “Snatch,” “Confidence,” and even “Fargo” get their inspiration. “Get Shorty” is elevated by its silliness delivered by its serious but charming cast, allowing the veil of crime to poke fun at the glitz and glamor of the movie business.

Based on the novel by Elmore Leonard of the same name, “Get Shorty” follows loan shark Chili Palmer and his attempt to break in to the movie business. After a run in with made gangster Ray Barboni, Palmer is sent to Vegas to collect on a missed repayment. There, he is told of a Hollywood producer named Harry Zimm with a lot of red, and decides to pay him a visit. It becomes clear that Palmer is a movie buff, and sets off a chain of events that manages to involve every gangster in town as he tries to outsmart his way into making movies himself.

Marking the directorial debut of Barry Sonnenfeld, “Get Shorty” certainly makes a statement that Sonnenfeld has skill behind the camera. Beginning his career as a cinematographer, Sonnenfeld’s work behind the camera includes “The Addam’s Family,” “The Addam’s Family Values,” and the “Men in Black” trilogy. There are some sure misses on his track record, like “Wild Wild West” and “RV” but when his work hits, it sticks the landing.

“Get Shorty” falls into the hit category, demonstrating all Sonnenfeld had learned working under Spielberg and the Coen Brothers and translating it into a brilliant screen adaption. It is difficult for any director to balance pure satire and goofiness with harden gangster archetypes. But Sonnenfeld managers to do just that, paying homage to the absurdities of Hollywood but also taking as many jabs at the business as possible.

Of course, this wouldn’t be nearly as good without its incredible cast. “Get Shorty” has a lot of “Wait, he’s in this movie too?!” moments, as anyone who’s ever been in a gangster film shows up as supporting cast members. Dennis Farina, James Gandolfini, Delroy Lindo, and a babyfaced Jacob Vargas all round out a strong supporting cast. But in truth, this is John Travolta’s film. There are many things that contribute to counting out Travolta as a legitimate actor, but time and time again films shine through his extensive resume to remind us that he can, in fact, bring it. Travolta is terrific as Chili Palmer. Cool, calm, and charming, he chews through scenery simply by being on screen. That’s pretty hard to do considering that in most of these scenes, he’s paired with Gene Hackman, Rene Russo, and a hilarious Danny DeVito.

The balance of “Get Shorty” is the final piece of the puzzle of what makes it such a fun film. The film gets sillier and sillier the longer it goes on, but its subtly is its strength. You don’t even realize how ridiculous it is that Pablo Escobar decides to pop in to LA to collect money and while he waits decides to take a trip to Universal Studios to “see the shark.” Or even the fantastical way in which Leo manages to scam an airline out of $300,000. There are so many ridiculous elements to this story, and yet it unfolds with such restraint and deadpan delivery it feels natural in its development. From the ridiculous to the downright absurd, “Get Shorty” feels organic.

Overall, “Get Shorty” attempts to do many things at once and manages to succeeds at almost all of them. It is a testament to Sonnenfeld as a director in the sense that he does his best work with strong casts and first time outings. One could argue that sequels are not his forte, as “Addam’s Family Values” and the subsequent Men In Black sequels don’t hold a candle to their predecessors. Likewise (though not involved) the attempt to capture lightening twice with “Be Cool,” a 2005 sequel to “Get Shorty” failed. Sometimes a film is good once, and despite its critical and financial acclaim, it doesn’t translate into franchise dollars.

“Get Shorty” is a one time deal, one who’s absurd characters work best when contained to the confines of one film. Many of the aforementioned films function the same way, too. Sure, we love Travolta as Palmer, but only in the context of this movie itself. While the film can inspire others like it, it’s best to let this stand alone on its own merits. It has plenty to stand on, and can be enjoyed over and over with multiple viewings.

And yes, Los Angeles smog IS the reason our sunsets are so beautiful.