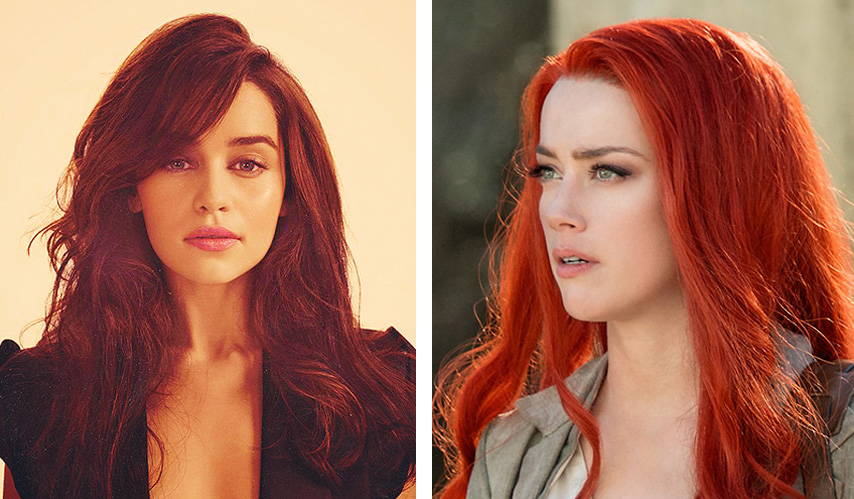 There’s a new petition going around to offer up an alternative to having Amber Heard reprise her play Mera in Warner Bros. upcoming ‘Aquaman 2‘. It was in late January that recordings emerged during the ongoing defamation lawsuit brought by Johnny Depp against Heard that seem to cast Heard as being the serial abuser. Now fans who are backing Depp’s version of events feel that she is no longer suited to participate in the DCEU. The ever-helpful fans don’t want Aquaman to be without one of its cast, so they’ve gone so far as to propose a replacement casting: Jason Momoa’s former ‘Game of Thrones‘ castmate and Queen of Dragons, Emilia Clarke.

The petition is still in its first few days of existence but it already has more 7,500 signatures. The petitioners’ proposal to the masses is the following:

Amber heard should be replaced by Emilia Clarke as Mera, Amber heard has falsely accused Johnny Depp of abusing her when it turns out she is the abuser herself I feel like if she stays on the movie/ franchise this will send a bad message, we should not condone any type of abuse if the Aquaman writers brought awareness to the polution in the water and how our sea animals die, then why would they keep an abuser? Amber should be punished accordingly, as for Emilia she has much better chemistry with Jason plus they are comfortable with one another, Emilia is also a fan/people favourite they will be good publicity for the movie since everyone loves Emilia and has had any bad press, she’s amazing warm and caring the kind of person kids can look up to, I don’t think Emilia will just take this as another movie role, I feel like she will take this more seriously than Amber.

Petitions to studios, especially online petitions are generally ineffectual, especially since there’s frequently a question about if they’re being loaded with bots or genuinely concerned fans. In some cases they may catch a studio’s notice enough to make a statement, but even if they were to address the ongoing civil suit, it’s doubtful they would be moved to do casting by public committee.

Plus it seems that Emilia is looking to take a step back from blockbusters and franchises for a while. In a recent interview with IndieWire, she was asked about tackling another top-line feature, “Not any time soon,” Clarke said. “I’m really actively looking for indies. Those are the things I’m making, as well. And those are the movies I watch.”

What do you think of this petition? Tell us in the comments!

Toad Visits Man Every Night, So He Makes Him Little Hats

Toblerone Cheesecake Exists And Life Will Never Be The Same