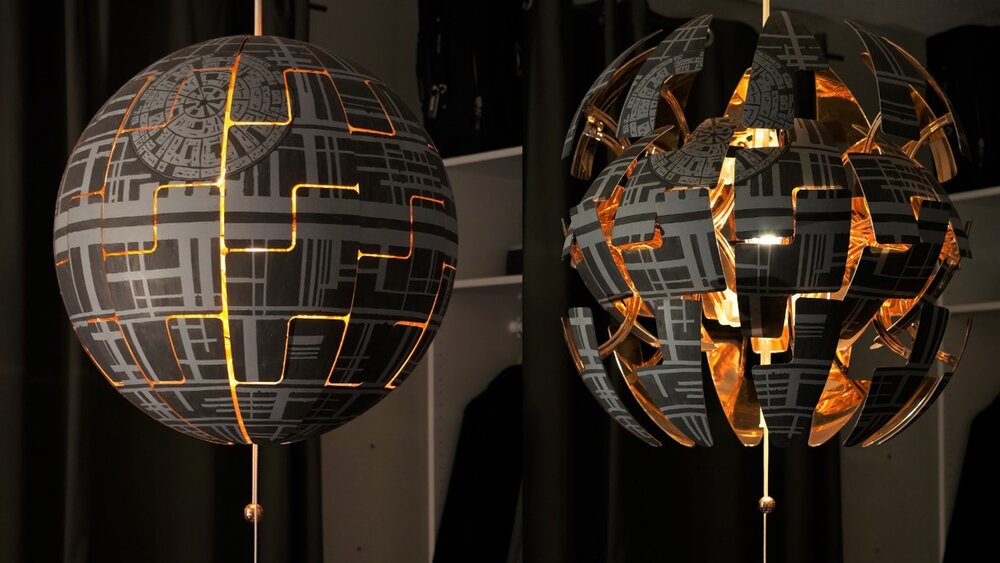 Transform this Lamp from Ikea into Your Own Exploding Death Star

Imagine, you are walking through an IKEA and you find yourself in the lamp section. All around you are different shapes and colors of lamps. It seems overwhelming having to select just one. Suddenly, you spot a pendant lamp and have the strange thought that it would look really cool as the Death Star. Well, Instructables contributor MariaK64 took that thought and pushed it a step further. Using their imagination and some paint, they turned a pendant lamp into an exploding Death Star!

Specifically, MariaK64 used the IKEA PS 2014 lamp. The tiles are spray painted with an initial coat of light gray. You can create a stencil of the weapon to draw the details on the lamp using a pencil. After your sketch is complete, cover the sections you want to remain light gray using bits of masking tape. You can cut the strips with an x-acto knife to make them varying widths and sizes. Now you can paint the entire lamp with a dark gray paint. Once it fully dries, peel off the masking tape to reveal the light gray lines. Simply hang the lamp up and whenever you pull the cord you will see an exploding Death Star!

You can find MariaK64’s detailed tutorial here. Plus, you can see the amazing video of the lamp in action above. I have a feeling IKEA is suddenly going to see a massive surge in pendant lamp sales. I know i’m going to be making a trip to Michael’s for lots of gray paint in the near future. After all, nothing is more satisfying than watching a massive weapon of destruction blow up whenever you enter a room!