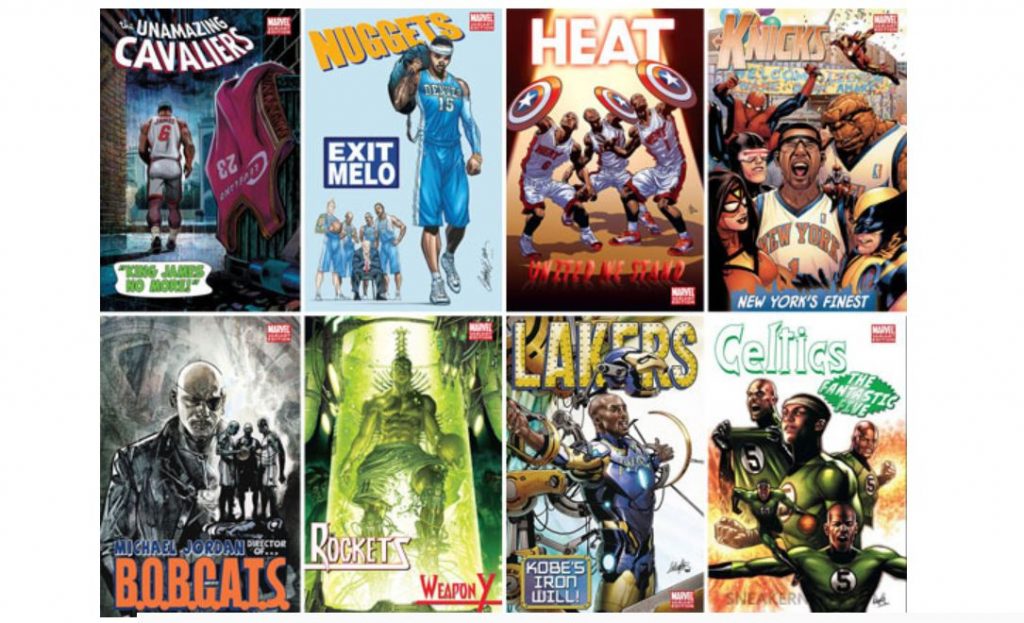 Now, when you think of Marvel superheroes gearing up for action and putting on their uniforms, it’s unlikely that it’s a uniform of a massive sports franchise. Afterall, comics and sports don’t mix, right? The likes of Iron Man and Thor are too busy fighting off their many enemies and saving the world to entertain the idea of such trivial matters. Yet, the people at Marvel Comics had other ideas, and looking at the results we’re glad they did.

Back in 2010 Marvel Comics teamed up with the NBA to make limited edition comic book covers for each team in the league. Some of the covers that were designed were reimaginations of famous Marvel comics from throughout the years. This included Lebron’s massive move to the Miami Heat from his hometown of Cleveland, stylized as an homage to Amazing Spiderman #50 where Peter Parker throws his superhero costume in the garbage in frustration at the demands of crimefighting. This can’t help but make you envision a world where Peter had decided to replace his Spiderman outfit with a basketball one and put those spider skills to use out there on the court. With him on your side there’d be little doubt who would be crowned the NBA champions.

When it comes to hockey and the ice rinks, the hero that would be best suited is Ice Man, one of the founding members of the X-Men. He’d have absolutely no trouble out there on the rink, what with his ability to manipulate the ice at will, and even turn himself into it. I’m sure the referees would have something to say about that though, as that must be against the rules. However, in 2011 when Marvel joined forces with the NHL, Stan Lee himself had other ideas and decided to go a different route. To coincide with the All-Star game of that year, the master of comics designed from scratch thirty new superheroes to represent each team in the league. This mass endeavour was named The Guardian Project and, as you’d expect from an attempt at something so monstrous in size, the quality of the characters varies greatly. A lot of the end results are obvious rip offs from the Marvel canon, with the Florida Panthers hero Panther being a carbon copy of its namesake Black Panther. Of course, it’s understandable with a name like that you’d be hard pressed not to think along those lines, but you do get the feeling Stan should’ve spent slightly longer on that one.  However, there are some real gems in there, including our favourite The Maple Leaf which represents Toronto. This gigantic lumbering beast is literally a walking maple tree, with the ability to grow branches at will and bears the strength that only hundreds of years of growing can bring. Delivering serious Tolkien vibes with that one Stan, and we salute you for it.

If you’ve ever tuned into an NFL game on a Sunday night, you might already be convinced that the players on the field have superpowers. After all, the strength, speed and size that is on show is nothing short of incredible. It will be no surprise then to learn that Marvel and the NFL combined earlier this year to celebrate the 2019 draft that was held in April. The draft is an event that happens yearly and sees the highest rated prospects that are graduating from college football, and are now eligible to play professionally, get selected by NFL teams. Also, just like the Marvel cinematic universe getting bigger and better every year, the draft in 2019 was the largest yet, with 40 trade deals completed and a staggering 47.5 million viewers watching live from their homes. To commemorate this event, Marvel decided to reinterpret five of their most important comic book covers from throughout their history to include the five most exciting young talents that were drafted. These include Nick Bosa, who was picked by the San Francisco 49ers, portrayed as a suited-up Tony Stark on the cover of Invincible Iron Man #1 which came out in 1968 and was drawn by seminal artist Gene Colan. One Marvel Avenger that doesn’t make an appearance in this crossover though, is Bruce Banner and his alter ego The Incredible Hulk. Maybe that’s because Bruce is such a big fan of the NFL and watching football that he’d never get angry enough to transform.