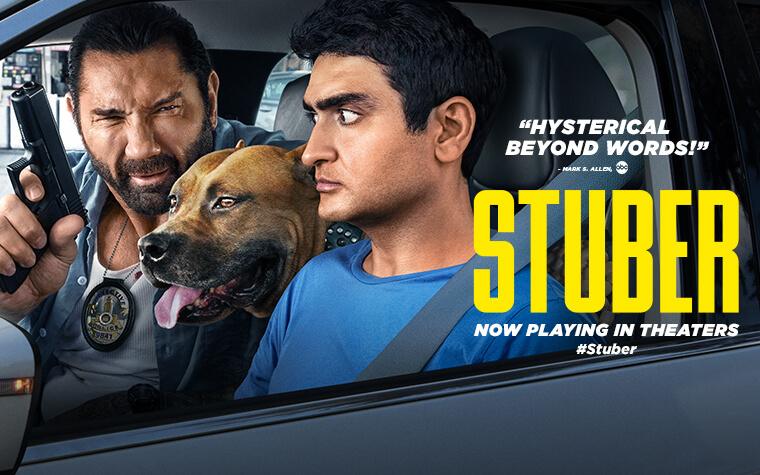 5 Things Stuber Got Wrong About Uber

When I am not undercover, gathering the latest entertainment news for Nerdbot, I’m out driving for Uber.  Being a rideshare driver, I was more than curious about the new movie Stuber, an action-comedy about a cop (Dave Bautista) who forces an Uber driver (Kumail Nanjiani) to help him catch a murderer. In interviews, Kumail said that the Uber company were fine with getting made fun of, but wanted the film to portray its app and service accurately. However when watching the movie, I noticed several things were incorrectly depicted. Here’s a few things that the movie got wrong about Uber:

One of the plot points is that Stu the Uber driver is concerned that if he keeps getting rated low by his passengers, the app. will fire him. It is true that if your star-rating gets too low you will be dropped, but one of the ways to avoid bad trips or ratings is to cancel a trip before it starts.

In the movie, the first ride we see Stu accept is for his annoying boss. After picking up his boss, Stu explains that canceling would effect his rating. This is misleading as your acceptance percentage doesn’t impact your star rating. In fact, a rider can only rate you if you actually start the ride, so canceling a ride is actually a great tactic to avoid a long and troublesome ride. Maybe Stu’s rating would have been higher if he used this move.

There’s a scene in Stuber where Dave Bautista’s daughter, played by Natalie Morales, sets up his Uber app and profile. She snaps his photo and we later see it appear on Kumail’s screen. When Kumail sees Bautista’s face he says, “I hope this is a 5-star ride.” This would never happen in real life. Drivers are not shown what their riders look like at any point, likely to cut down on discrimination. Now I drive in Los Angeles, so other markets might show rider’s photos, but Stuber takes place in LA. I would hope that this error wasn’t due to the film being mostly shot in Atlanta.

3. Riders Must Set a Destination

All too often in this movie, a rider jumped into Stu’s car and they had to punch in their destination. The only time I had to immediately type in an address was when the address they had was for a location in Europe. There’s many reasons riders need to have their destination already set, like confirming that the address is valid or letting the driver know how long the ride should be (there are some days where I don’t want to drive to Vegas). However, both the rider and driver can change the drop-off location mid-trip.

4. Drivers Can’t Give Rides to Kids

There’s a montage in Stuber where Stu picks up several annoying riders. One of those riders is clearly a grade-schooler with his science project stuffed into the back seat. This goes against Uber policy.

I know this may come as a shock to some Uber users, but you can’t send a car to pick-up your sweaty kid from soccer practice unless you go with it. According to both Uber and California State law, you can’t give a ride to a minor unless there is someone over 18 with them. Even then, if it is a toddler or baby, they better have the right car seat with them, otherwise we are supposed to cancel the trip.

5. An Uber Can’t Drive a Cop Around All Day and Night

Now all the changes the movie made in how Uber works has been for comedic effect or in service of the plot, but this one takes the cake. Even though there is no distance limit to an Uber ride, there is definitely a a time limit. After four hours, the app will automatically end a trip. Other than driving for four hours without a break being grueling, I believe this limit is in place in case a driver forgets to end a trip and the rider is still getting charged. So even though the cop kept changing his destination, the movie would run into the four hour time limit.

Minor SPOILER for Stuber ahead: Another thing to factor in is most drivers would not keep going on the ride because they might not get paid for it! There are folks that abuse and exploit Uber into giving them free rides. If a rider got a charge for over $5,000, like in the movie, then they would certainly report it and try to get out of paying. In other words, the Uber driver would have driven for 4 hours for nothing.

Well I hope you all learned a few things about Uber today. If you haven’t seen the movie yet, I would recommend it as it is both funny and action-packed. Let us hear your rideshare horror stories in the comments below.

Also, if you enjoyed this article, let me know if you’d like a follow-up on everything Stuber got right!