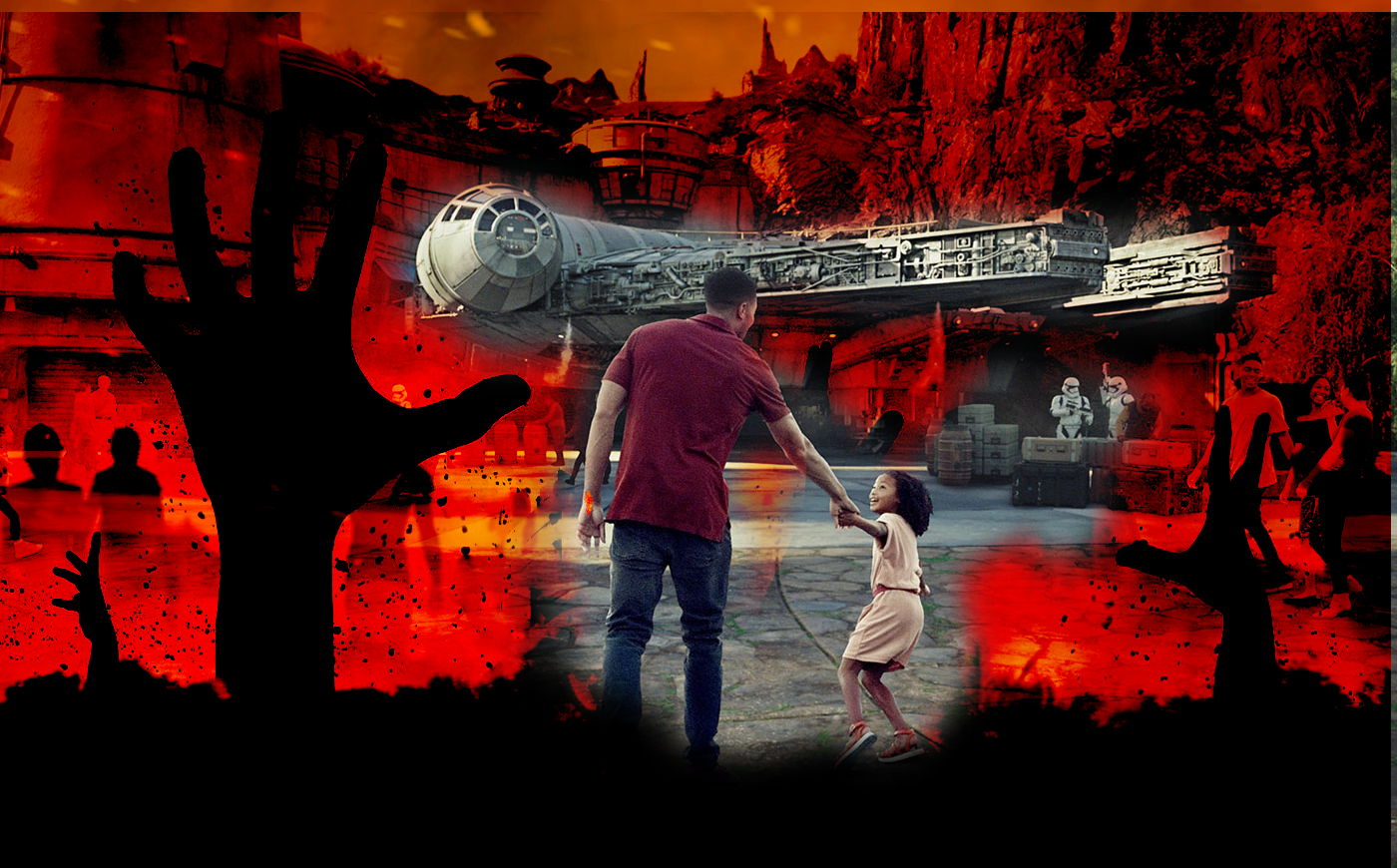 Star Wars: Galaxy’s Edge What You Need To Know Before Going In!

Have you ever read Dante’s Inferno? For those that are unaware, it’s a book of poems dedicated to the opening of Star Wars: Galaxy’s edge. You see, come May 31st, hell will literally rise, and unleash all 9 godforsaken layers.

The food offerings are pretty exciting judging by its menu (here). But to cram that many people into a restaurant and or bar seems nerve-wracking. With the rumored 6-8 hour wait to just even get into the land, I’ll explain later, it’s not exactly easy to get back into the land once you leave. While exotic, how good can the food be to eat after waiting in line for 3 hours? But alas, items like the “Blue Milk” and “Yub Nub” (a cocktail no less), tempts me so bad to suffer the heat and the line. Speaking of lines…

Before yesterday’s announcement of the opening date, the rumored wait time was going to exceed 4 hours to even get in. Disney was very careful in how they went about this and in a small paragraph, it says:

“Guests planning to visit…will be required to make a no-cost reservation, subject to availability, to access the land”

So it would seem that Disneyland has solved the problem of overcrowding by turning that responsibility onto YOU, the viewers.

This was the only fair way to really get people into the land without overcrowding. This whole reservation system will be running for an entire month and possibly more if it turns out to be positive. You get the enjoy the land without traffic and get to interact with all the immersive stuff Disneyland promised like that ride that… isn’t going to open now.

The main course of (Samsung’s) Galaxy’s Edge is the ride/experience ‘The Rise of the Resistance”. The purposed 28 minutes long attraction, yes 28 minutes, will take you on a hero’s journey of sorts as you and others get picked up by the Resistance to infiltrate The First Order. A hybrid of different elements on an very ambitious level, if done right, will revolutionize how we experience theme parks in the future.

Disney pointed out that whatever happens on this attraction, which ever side you choose; will affect your experience later in the land.

Unfortunately, we won’t see it for a very long time. For you see, the only attraction that WILL be open is ‘Smuggler’s Run’ aka the Millennium Falcon ride. I won’t mince words here; I will weep like a baby who just farted for the first time in their life upon seeing the Falcon. However, I also wanted to see this new hybrid attraction come to fruition. Sadly it doesn’t seem like it has a release date yet. That’s disappointing on many levels since that sucker takes up about 4 acres of land! For Disney nerds, that’s a good portion of Fantasyland.

So why was it pushed back you might ask. With over 50+ animatronics at work, plus half the ride still being built, wouldn’t it just make sense to open it later in the year? Why rush something when you can’t meet the deadline, which ironically was how Disneyland opened 64 years ago.

This takes us into the next level, which is…

It wasn’t coincidence that Disney happened to choose May 31st to open the gates of Hell, no.
This whole PR move was to gain attention away from another attraction that’s opening up June 13th.

I barely just heard about this and it was up on twitter for a solid week and a half now. Yet Disneyland made a press release ABOUT a press release and it blew up my feed. That’s some flamin’ hot Cheetos fire.

To ‘steal the thunder’ sort to speak on the new ride opening on another coast seems reaching but if you think about it, if you had money saved up for a trip, which park would you ultimately go to?

Make no mistake that I would give anything to see this land with my own eyes. To feel the dirt between my fingers and breathe the air that is “the furthest planet out in the Outer Rim”.

Yet all the news that has been trickling out fills me with that trepidation I had before watching The Last Jedi.

And that’s the lust many others and I have for Star Wars. That even if it’s not perfect, it’s still good enough for us to complain about. Because we’re a passionate bunch, a rowdy bunch, but mainly a fun bunch of nerf herders.

So come Sometime in the near future, I will be there with my lightsaber in hand, drinking a nice cold cup of Green Milk.

This post was not sponsored by Disney but would like to be by Universal Studios Orlando. Also very aware I only covered 5 layers of Hell.