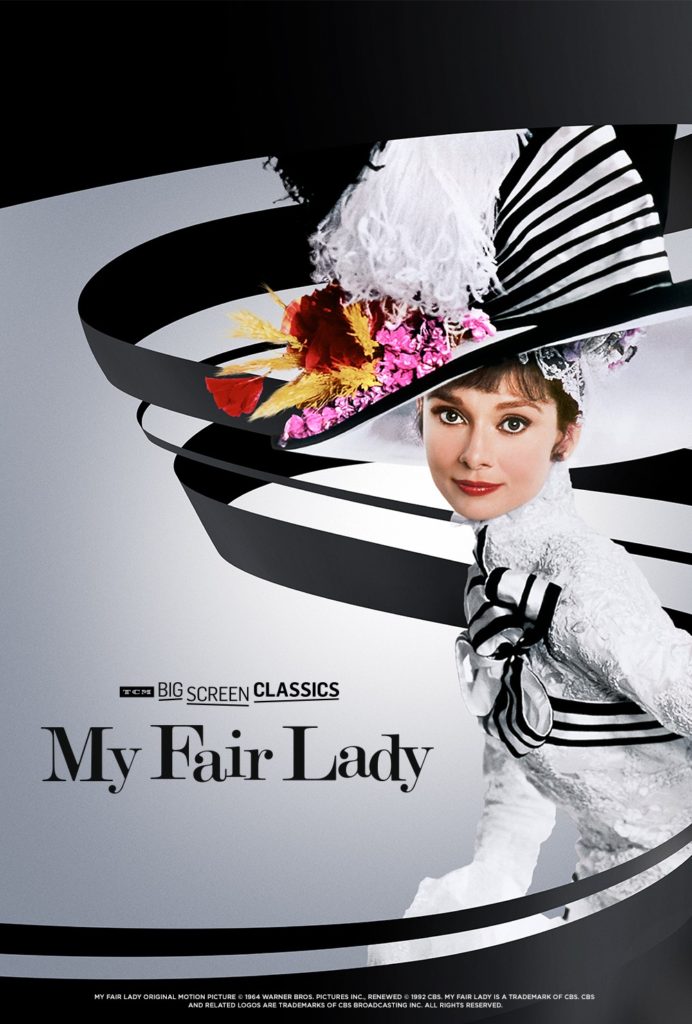 ‘My Fair Lady’ Returns to the Big Screen in Special Showings

Go down the street where you live to a theater near you and catch a special big screen showing of the Academy Award-winning musical My Fair Lady! The film was recently restored for its 50th anniversary so it is even more “loverly” than ever. Turner Classic Movies has scheduled showings of My Fair Lady on February 17 and 20 as part of the 2019 TCM Big Screen Classics Series. Each TCM classic is usually preceded by some behind-the-scenes trivia about the film and followed by some insights provided by TCM host Ben Mankiewicz. This presentation of My Fair Lady should include a brief intermission.

The film was released in 1964 and was based on a Broadway musical by Lerner and Loewe, which was itself based on the 1913 play Pygmalion by George Bernard Shaw. The movie tells the story of how poor Cockney flower seller Eliza Doolittle (Audrey Hepburn) becomes enmeshed in a bet between two phonetics experts: Professor Henry Higgins (Rex Harrison) and Colonel Pickering (Wilfred Hyde-White). Professor Higgins had boasted that he can teach anyone to speak so well that they could be accepted in high society and Colonel Pickering had dared him to prove his claim using Eliza as a subject. Eager to get a better job, Eliza agrees to participate. The movie continues with Higgin’s attempt to transform Eliza into a lady and the repercussions once the bet is completed. Although usually considered a romance, the relationship between Eliza and Professor Higgins in the movie is often confrontational and the ending could be considered ambiguous. This harkens back to Shaw’s attitude toward his play Pygmalion. He felt that Eliza’s character development would regress if she settled for a subservient relationship with Higgins. Shaw felt that the character would retain more of her pride and independence if she spurned the professor.

The “Pygmalion trope” in which a character falls in love with their creation, in particular when the creation is a person who they have molded by giving them lessons in speech, manners, deportment, etc. has appeared in several films. In particular the first pairing of Julia Roberts and Richard Gere in Pretty Woman (1990) and later the teen romantic comedies She’s All That (1999) and The Duff (2015). It was also used in the two versions of Born Yesterday (1950 and 1993), in which an unscrupulous businessman is embarrassed by his uneducated girlfriend and hires a reporter to give her more culture. Unfortunately for the businessman, her education lets his girlfriend realize what a louse he is and she falls for the reporter. In the George Cukor-directed 1950 version, the trio was played by Broderick Crawford, Judy Holliday, and William Holden. When it was remade in 1993, the trio was played by John Goodman, Melanie Griffith, and Don Johnson. Griffith had starred in a movie with a different spin on the premise in 1988’s Working Girl. In that movie Griffith’s working-class character transforms herself so that she can get ahead in the business world. A similar premise was used in Jennifer Lopez’s recent film Second Act (2018).

So take this opportunity to see a movie that won 8 Oscars and was recently added to the United States National Film Registry. Tickets available at http://www.fathomevents.com