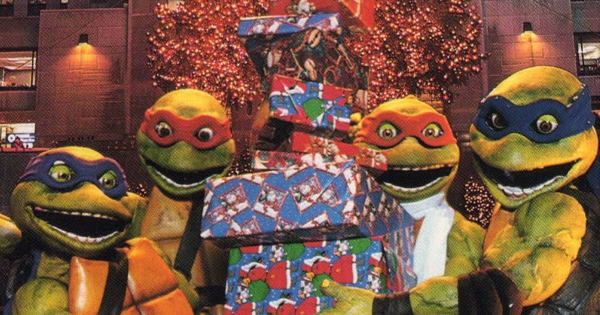 When you work alone at a night job you will do almost anything to stay awake. I spend an average of five hours a night listening to music or really whatever will keep me coherent. It was during this time that I discovered that there is a whole world of Christmas music I totally forgot about.

There are a lot of one off Christmas songs but some of these are part of full albums. I could have taken the easy route and talked about the songs from the Grinch, Charlie Brown or those stop motion Christmas features but everyone remembers those. Those are the classics, I want to talk about the unknown and slightly more silly side of the Christmas special. Some of which are songs with lyrics that have been reworked, others unique experiences unto themselves… So without further ado, in no particular order,  I am happy to present to you A Cartoon Christmas Extravaganza!

Ok I only included this one to kick off the list. It’s a short video of Rogue, Cyclops and someone I can’t identify from behind. I think it’s Jubilee but it’s really hard to tell. Anyway the best part of this comes at the end when even though Scott is singing he still has that seasonal cough everyone gets. #relatable

This is probably my third favorite song from Pokemon. The first being of course the theme song sung by the iconic Jason Paige. The second is called 2B A Master from the first English album for the show. Fortunately I was able to find a cool fan made video of this so I could show you the ridiculousness of this song. I’m not embarrassed to say that I listened to the Pokemon Christmas Bash album on Google Play music last night in its entirety. It was actually really cute. It had all kinds of voice acting worked in and Brock, Misty and Ash sang their way through some very altered classic Christmas songs. Team Rocket and Meowth even got to sing some parts too!

The question here is how is he able to celebrate the birth of Christ if he is living in the stone age. Or maybe he is in a post apocalyptic world after all. The song comes from the fifth season of the Flintstones which aired in 1964, the same year that Rudolph came out. So people were already celebrating Christmas in a big bad way.

I don’t know for sure but I think this might be the worst song I have heard. I mean it’s fine, it’s great, but it’s so childish. “Joys of Sharing”, the children sing as they clap their little animated hands together. Kowl and Orko dance a cute little jive that recycles the animation twice for time filler, it’s all very cute and very 80’s utopia.

I’m actually a little sad I didn’t own this album as a child. It is super cute and I would have stared at the cover for days. I love rainbows. Throw in a rainbow horse and I’m there.

My Little Pony That’s What I Love About Christmas

This comes from the generation of My Little Pony that honestly I skipped over. I went straight from G1 to the current My Little Pony Friendship is Magic. G3 came at a time where I was growing up through my teens and ponies weren’t cool anymore. However if you grew up during the 00’s this may be one of the Christmas songs that you do remember somewhere in the pit of your mind. It’s pretty cute all in all, I wish they had a song like this from the original show. Now they have an entire album from Friendship is magic dedicated to Christmas music but since it’s a current release it doesn’t count as something you might have forgotten about. At least not yet.

Ok so this is one that I think everyone has sung at least once in their lives. The song predates the show but they did end up incorporating it in a beautiful scene where at the end Joker blasts off on a giant Christmas tree rocket. That’s pretty awesome.

No L, No L, Santa’s name has no L, and it goes from there. Part of what I loved about Animaniacs was that no matter what you could always count on a good song. This is probably one of my favorites.

Not so much as a Christmas Song Rendition as an Intro that turned into a Christmas song. I grew up watching this show and was very attached. So when I saw this as a kid I was stoked. You mean to tell me that all my favorite characters are celebrating the same thing I am? Having grown up I know that statement is pretty privileged and there needs to be a lot more representation of other holidays as well as my own. But man if it wasn’t cool back in the day. I also want to mention I was like five when I first saw this so there’s that.

The Teenage Mutant Ninja Turtles sang a version of the 12 Days of Christmas and the video for it is both intriguing and terrifying. I mean just look at those turtle costumes. Look at the mouths… just look. The song is pretty ridiculous too. I mean really guys? You are going to give Splinter 12 April O’ Neil autographed pictures? Why on Earth would he need twelve? There’s no ebay yet, he can’t sell them, so why? This is part of the We Wish You a Turtle Christmas Special which came out on video in 1994. The best news is that the whole thing is up on Youtube!

The last one I can think of.. And it’s not a cartoon special per say.. However it does fit into the realm of people in character suits.

Alright so this doesn’t qualify as cartoony but come on guys. It’s THE Star Wars Holiday Special! It also counts if you consider that they cross boundaries and there is not only live action movies of the series but also cartoons now. So we will call this a gateway special. Hopefully Disney in the future will come out with another album featuring the cartoon cast of the show.

Of course there are plenty more Christmas Albums put out by cartoon companies out there. That will always be a given granted parents are suckers and if something has a picture of their kids favorite character on it of course we will buy it. These have just been the ones that stuck out to me the most. I hope you enjoyed this trip down memory lane with me!

Are there any special Christmas versions from YOUR favorite cartoon that I missed? Tell us in the comments and get the conversation started!