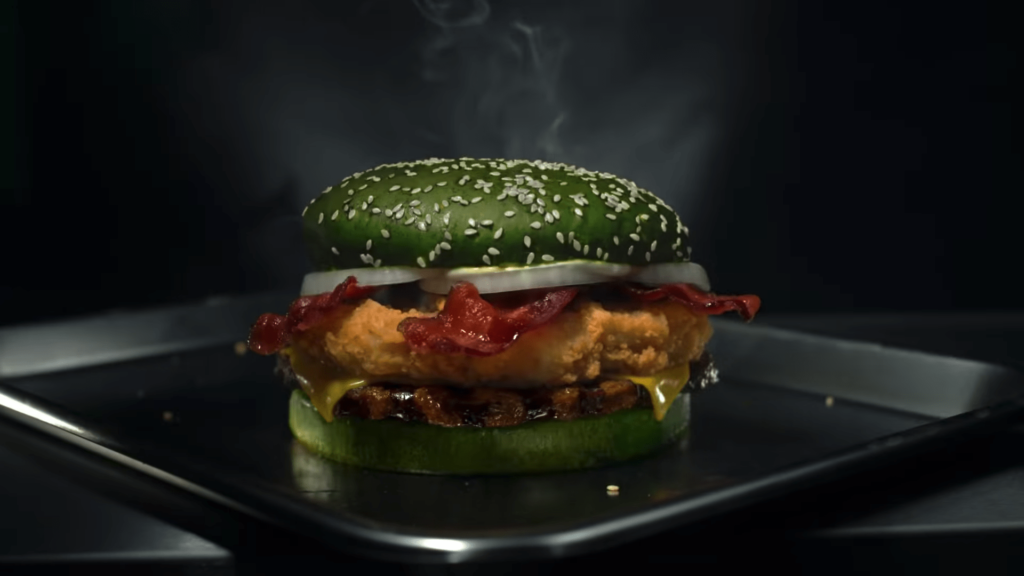 It’s not often that a restaurant strives to have the word “nightmare” associated with their food but Burger King, the good people who introduced to the concept of chicken fries, are rolling out their new Nightmare King on Monday, just in time for Halloween. Slapping a quarter pound of beef, a deep fried chicken filet, bacon, cheese, mayo and onions in between to green buns sounds like an abomination in itself –the type of dish concocted at four a.m. by a drunk college student using questionably old ingredients. The twist to the King’s new horror show is that it supposedly gives you actual nightmares after eating it. Watch out Del Taco, Burger King is coming for you, and Hell is coming with it! 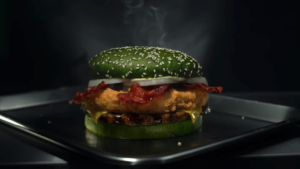 A study by Paramount Trials and Florida Sleep & Neuro Diagnostic Services of 100 people over ten nights showed that participants experienced increased nightmares after eating several layers of grease and sodium stacked between two green buns. There are probably a lot of questions running through your head now, for instance, “Why would anyone knowingly ingest this with the chance of waking up hours later in a cold sweat, screaming about zombie Ewoks eating them alive while clutching their stomach in pain?” or, “What monster would dream this up and then scientifically test it?” And of course, “What type of chowder heads signed up for a study where they had to eat Burger King’s untested psychological horror for ten days? And how much does it pay?” Or, perhaps you’re just wondering about the science behind it.

Studies show that 4 percent of the population have nightmares on any night, however this artery clogger increased those nightmares in the participants by 3.5 percent.  As far as I can tell, there has been no data collected on what type of skin collecting psychopath is actively seeking to ramp up their night terrors. Except, of course, the creator that birthed this Rosemary’s Baby of a burger unto the world.  Rest assured, thrill seeking gormandizers of the world, it seems that Burger King is not mixing the mayo with the tears of the damned to produce such effects. According to Dr. Jose Gabriel Medina, a somnologist and the study’s lead doctor, it’s the combination of protein and cheese that produce the type of dreams you won’t want to jot down in your dream journal for fear of them gaining sentience and killing your pets. No word yet from Freddy Krueger’s camp on his involvement with the project.

The true horror here is the price: $6.39 for a fast food burger that is more of a dare than a meal. This regrettable decision is available until November 1.