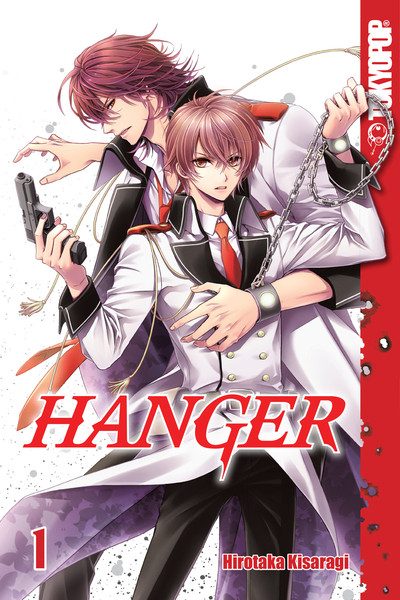 Nerdbot would like to thank Tokyo Pop for providing us with a review cop of ‘Hanger’ Vol. One by Hirotaka Kisaragi. 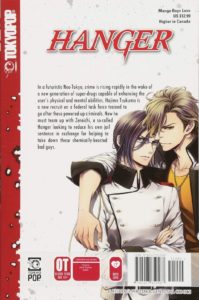 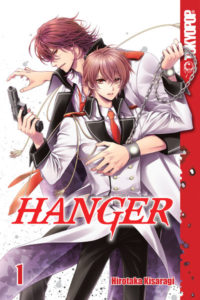 All right– glad I got that out of my crazed, pent up system. Onto the review!

Boy’s Love and Yaoi are super hot genres right now. Which is awesome! Queer representation needs to be normalized, and that is exactly what is happening here in the Hanger series. Because honestly, this is a full and fleshed out story first and foremost! The world and premise here is so rich and fleshed out that you could take away the budding romance and it’s still a super strong story.

In a futuristic Neo-Tokyo, crime is rising rapidly in the wake of a new generation of super-drugs capable of enhancing the user’s physical and mental abilities. Hajime Tsukumo is a new recruit on a federal task force trained to go after these powered-up criminals. Now he must team up with Zeroichi, a so-called Hanger looking to reduce his own jail sentence in exchange for helping to take down these chemically-boosted bad guys.

So, it’s a little bit difficult to follow (the premise is pretty layered), but ultimately, it’s a story about a bright-eyed new cop paired with a criminal who was a former high-drug user. The high-drug can either kill you or turn you into a super human, which is what happened with Zeroichi (Zero-One, or 01 if you want to get all Evangelion about it). In the opening chapters, Hajime gets attacked and therefore, all the powers that be decide he is better off with Zeroichi living with him.

And come on– we all know that’s the best way to make evening tension and romance happen in yuri and yaoi. Stick them in the same apartment together! Yeeeeeaaahhhhhh.

And interesting thing to note about the Hangers’ capacities in this world is that the former usage of high-drugs affects each of them differently. For example, Zeroichi can control his aggro-rage by eating a ton of food. Which is an adorable quality for most anime characters, especially sexy moody boys. Thus, Hajime cooks for Zeroichi and that adds a drop of tenderness to the narrative. The secondary male couple, the policeman Hibiki and his bad-boy Hanger Hashima have tons of sex to “keep Hashima’s aggro-rage in check”. But they really actually love each other, which is just so sweet and delicious.

Let’s talk about the art in this story– it’s fantastic. The fashion that the guys wear combined with the tightly drawn action reminds me of all of my favorite manga from the late 90s/early 2000s. And this is a new story! While Tokyo Pop only published it this year, in Japan, it’s from 2015. So in the big picture, the manga is still very recent. The explosions are great, the fight scenes are perfectly staged, and the art is beautiful and consistent. I really, really love the designs in this story.

Lastly, to touch on Hajime and Zeroichi– they have an Utena and Anthy dynamic. Whereas, we know they belong together. We see this beautiful relationship and bond forming. Hajime is immediately attached to Zeroichi, but admits he knows nothing about him. Zeroichi lost his memories prior to becoming a “Hanger” so all he has to go on is from the last year forward. Zeroichi does remember losing his last partner, who he watched die. Thus, he never wants to experience this again and right away is protective over Hajime.

Between the layered and complex story, the incredible art, and the very organic Boy’s Love story, Hanger is a story I’m hungry to see more of. Many congratulations and applause to Tokyo Pop for sliding back into Yaoi (pun always intended) and bringing quality stories like this back into the forefront. I can’t wait for volume two.

I give Hanger by Hirotaka Kisaragi 5/5 stars.