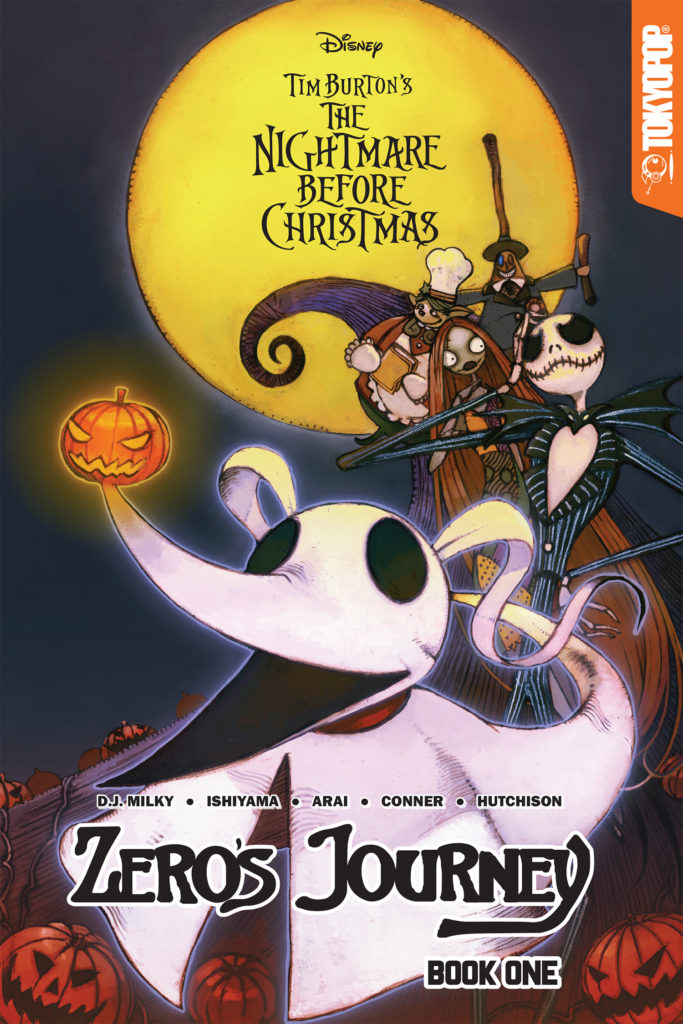 Nerdbot would like to thank Tokyo Pop for providing us with a review copy of Disney’s ‘The Nightmare Before Christmas: Zero’s Journey’

The Nightmare Before Christmas: Zero’s Journey is a original graphic novel and collaboration between Disney and Tokyo Pop. DJ Milky, Ishiyama, Arai, Conner, and Hutchison are credited as the writing/art team behind this beautiful and charming story. With other franchises like Star Wars, Avatar: The Last Airbender and The Legend of Korra having very successful graphic novel spin off worlds (that are still in canon), it’s amazing to see The Nightmare Before Christmas get a chance to expand on their universe.

It’s very easily arguable that Nightmare fans (and what an enthusiastic an dedicated fan-base it is!) are starved for more of the delicious world Tim Burton built back in 1993. But alas, a formal sequel never came (though Corpse Bride and Frankenweenie exist in Burton’s multilevel spookyverse). Discussions have been made, even at Nerdbot HQ about what sort of story fans would want from Nightmare. Where would it start? What story would it tell? We know that Jack and Sally end up together; they’re simply meant to be, after all. The main antagonist is gone and lessons have been learned. So, with that, what familiar, lovable character could the viewer follow that would make sense and still carry the adventure? 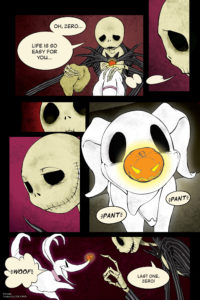 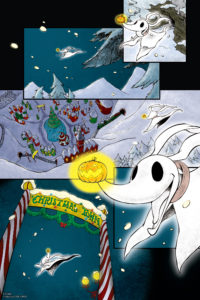 And that’s where Zero’s Journey begins– sometime after the original adventure, a year or so if I had to guess. Jack, who is busy trying to figure out why the Holiday Town portals are wonky, provides Zero with minimal attention. Jack declares that he has some sort of “big plans”. During a quick game of fetch, Jack bumps some sort of portal remote off his desk. A pumpkin cloud appears and sucks Zero away into a puff of green smoke, whisking him away into the circle of trees and back through the door leading to Christmas Town.

There is so much good happening in this full-color and beautiful graphic novel. One of the things I like best about it is that it really feels like “My First Manga”. The story is not only for a younger reader (maybe geared for 7+ if I had to assign a readership age), but I love that it’s set up in traditional right-to-left reading style. Because the truth is, it can be counter intuitive to read that way if you aren’t prepared for it, but with Zero’s Journey, a young reader can adapt to this style and get ready to read more manga! Whether or not Tokyo Pop meant for this book to be an introduction to manga for children or not, I feel it is immensely helpful.

Once Zero is alone in Christmas Town, the story plays out in a way that reminds me of an old cartoon– singular in its layers and quiet. He starts off on a fun, frolicking adventure where he collects new friends to play with (an owl who plays with him, some deer that are curious to see what he’s up to, down to watch some elves ice skate, etc.) Keep in mind, Zero doesn’t talk and neither do his new animal friends. Therefore, it would be very easy for a young reader to keep track of the action because all they have to do is look at the pictures.

Zero then makes his way into a kind woman’s house, which is when the narrative shifts. The woman feeds him and reads about Christmas Town and its Winter-focused traditions. There are even sweet throw-back images in her book referring to the time Zero and Jack tried to steal Christmas. But soon after her tale, Zero’s no longer having a good time, but doesn’t know how to get back home. 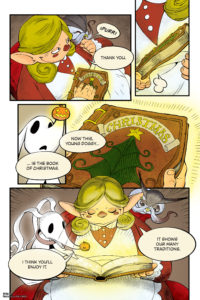 Meanwhile, back in Halloween Town, Jack is getting nervous and sets a search party out to find Zero. Let me pause here to say that I absolutely love what the creative team behind this book has chosen to do with Jack Skellington. He’s still his familiar, curious, if not proud and cocky self, but there’s something new in there too. He’s a little bit…aged down, let’s say. Almost a little goofy, which is a really fun edge for him to be bordering on. And Sally continues to just be so sweet and loving to him. 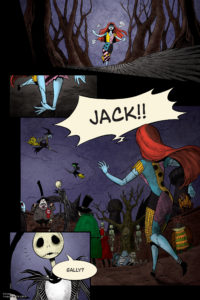 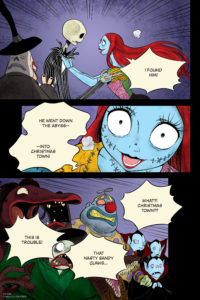 That’s one area that shows the age Zero’s Journey is intended for. Yes, Jack and Sally are openly involved. But they don’t live together. She’s not the Pumpkin Queen. She’s still living with Dr. Finkelstein. They’re not making out on the spiral ledge. It’s all very sweet and calm and has none of the implications that people probably seek out in Fan Fictions.

Back to the search party; the whole town is looking for Zero (and it’s great fun to see all the familiar characters from the movie still in character) before Sally makes her way to the circle of trees and learns that Zero is lost in Christmas Town. Lock, Shock, and Barrel tell Jack they’ll go find the dog. He tells them not to double cross him again. They promise they won’t.

Ensue crossing fingers behind their backs. Again. Those stinkers. 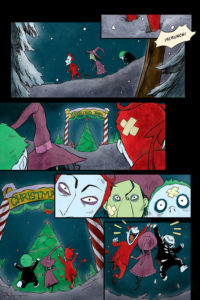 The three head into Christmas Town to look for Zero. Meanwhile, tensions rise when Zero attempts to snack on a sentient Gingerbread Man, who gets angry when the dog bites his foot, and locks him into a cooking pot. This is where the story ends, but the layers set up let us know that this isn’t going to be an easy rescue. One, Zero is double lost. Two, Oogie’s boys are garbage people out to cause trouble.

Again, I’ll reiterate; this is a book for kids. But it’s wonderful that Tokyo Pop and Disney formed this awesome collaboration and that Disney was open to creating new media in the Tokyo Pop tradition– incredible artwork in graphic novel form inspired by what was once Japanese storytelling. But now, it’s clear that this method has spanned countries, genres, and now franchises. This book would be excellent in any budding manga reader’s collection, The Nightmare Before Christmas fan, or someone looking for new Disney media to consume.

I give ‘The Nightmare Before Christmas: Zero’s Journey’ 4/5 stars.