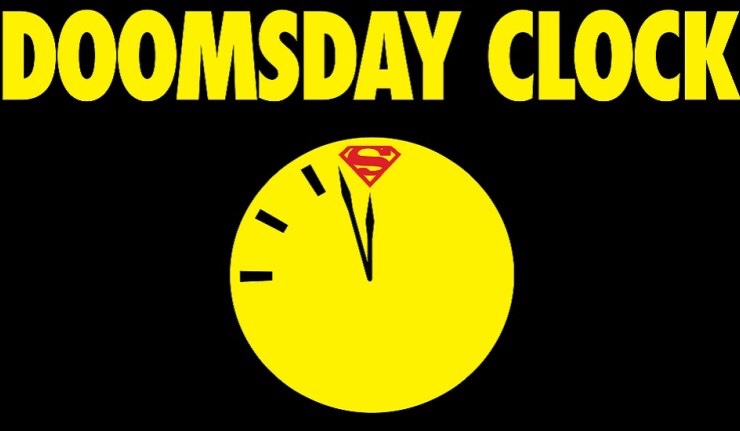 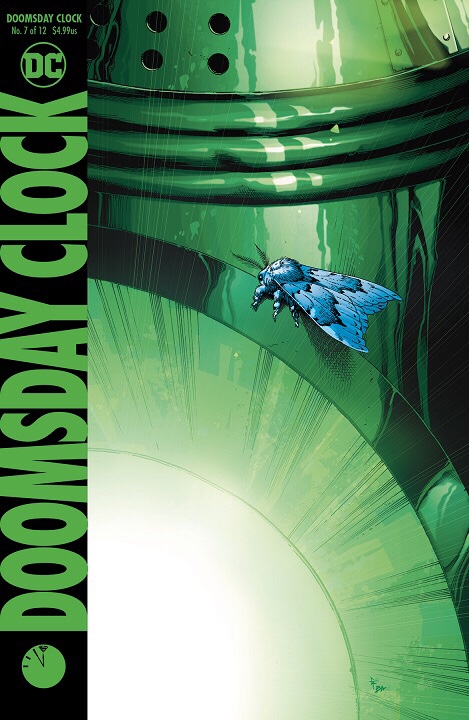 Two issues ago, Rorschach, along with the help of the telepathic Saturn Girl and Johnny Thunder discovered a Green Lantern in an abandoned factory. We resume the story with brief history lesson narrated by Dr. Manhattan. The opening monologue, delivered in his signature blank cadence, takes us back to the year 960 A.D. all the way through the present time where the Lantern erupts with power, preventing our mysterious blue superman from seeing the future. 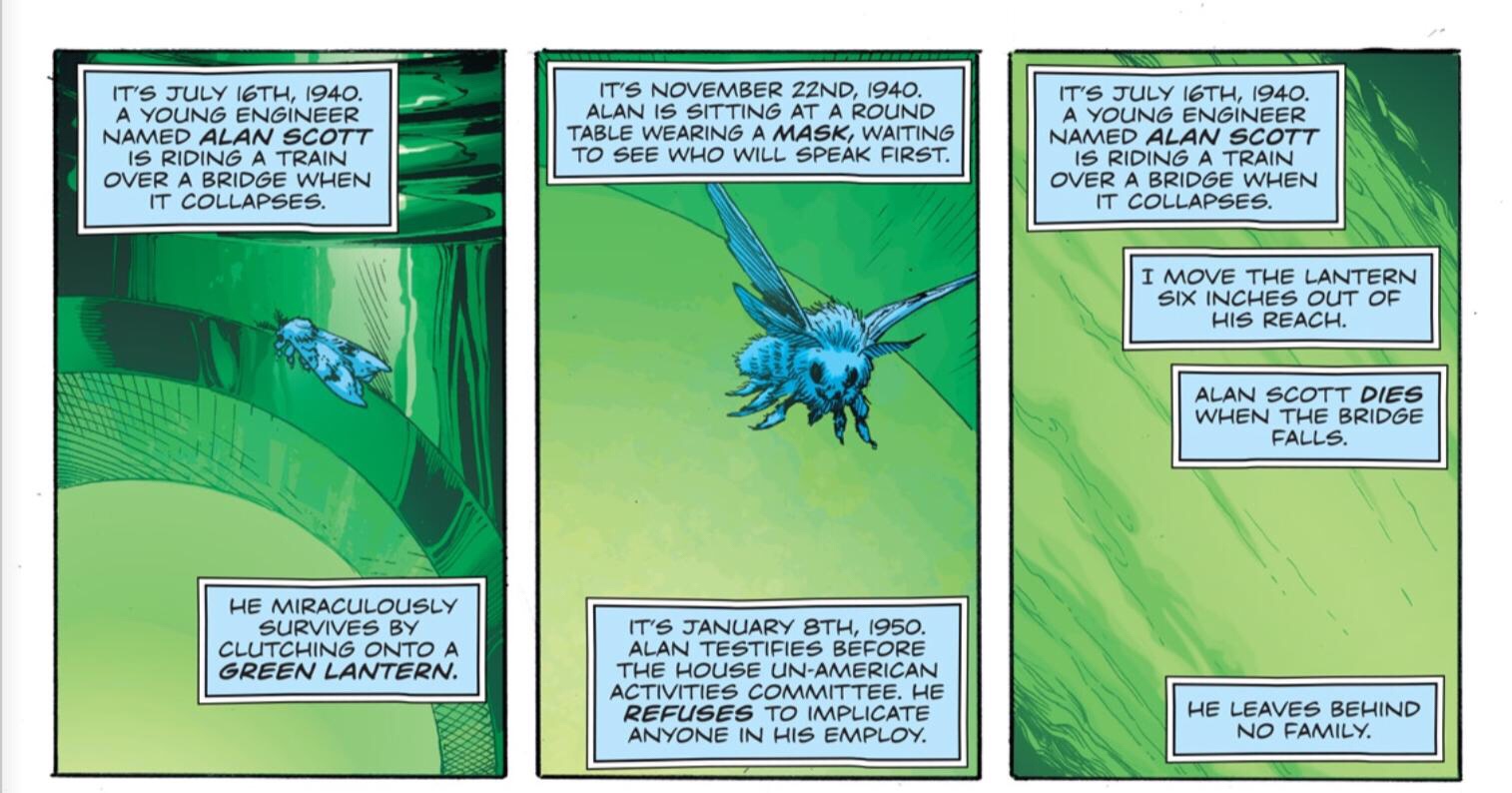 Rorschach and company get picked by Ozymandias who’s wall of televisions give us updates on the intensifying Metahuman Arms Race. Let me break this down for you. Select countries are in possession of their own costumed heroes. These people are government endorsed and are subject to political repercussions for actions they may take… good or bad. Various nations are involved in a superhero Cold War as they try to compete with the United States. Imagine what America and Russia had going on way back when, only it’s metahumans instead of Nuclear Weapons. What’s interesting to note is that Superman remains exempt from laws regulating the activities of those with special abilities.

The background exposition transitions to Adrian Veidt expressing his disapproval of Rorschach’s new friends. Things haven’t been going to great for the smartest man in the world. His headaches are getting worse and the quest to find Dr. Manhattan is taking its toll. However Bubastis, Ozymandias pink cloned cat, may have the solution. 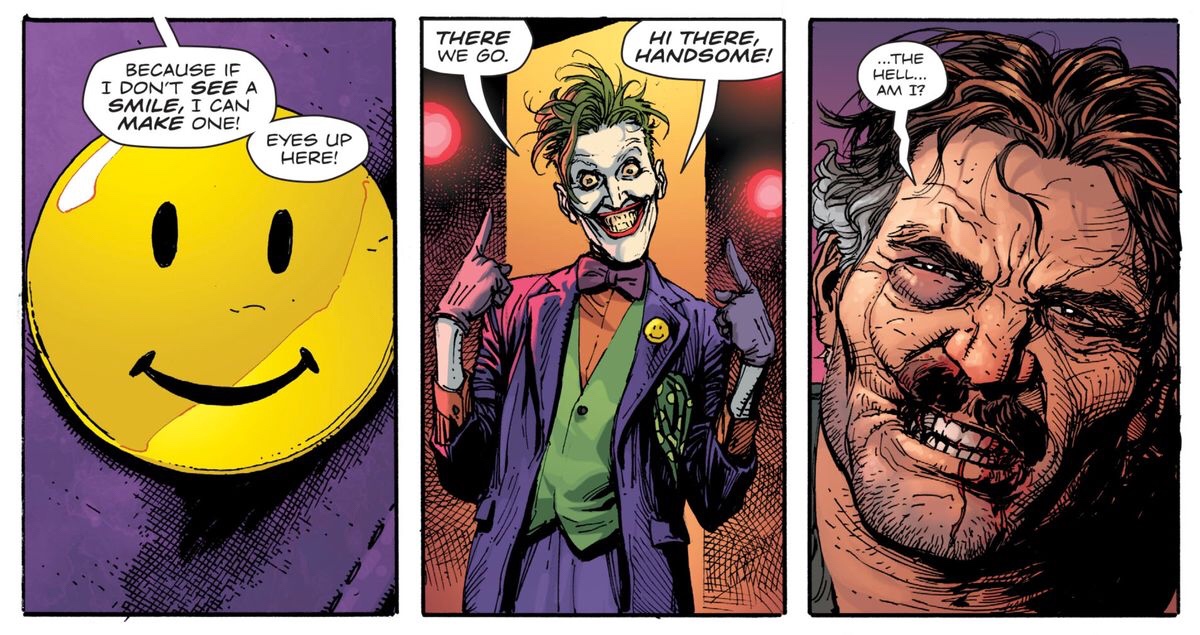 Next we head to the Joker’s hideout where Mine and Marionette torture a busted, but not broken Comedian. The Clown Prince of Crime wears the now bloodstain-less smiley face button that started this entire Watchmen rebirth. Smoke fills the room as Batman makes an entrance. It’s time to throw down!

Joker busts out a flame thrower. Rorschach joins the fight. Ozymandias channels both the Lantern’s and Bubastis’ energy in an attempt to summon you know who and guess what… Dr. Manhattan makes his second Doomsday Clock appearance. 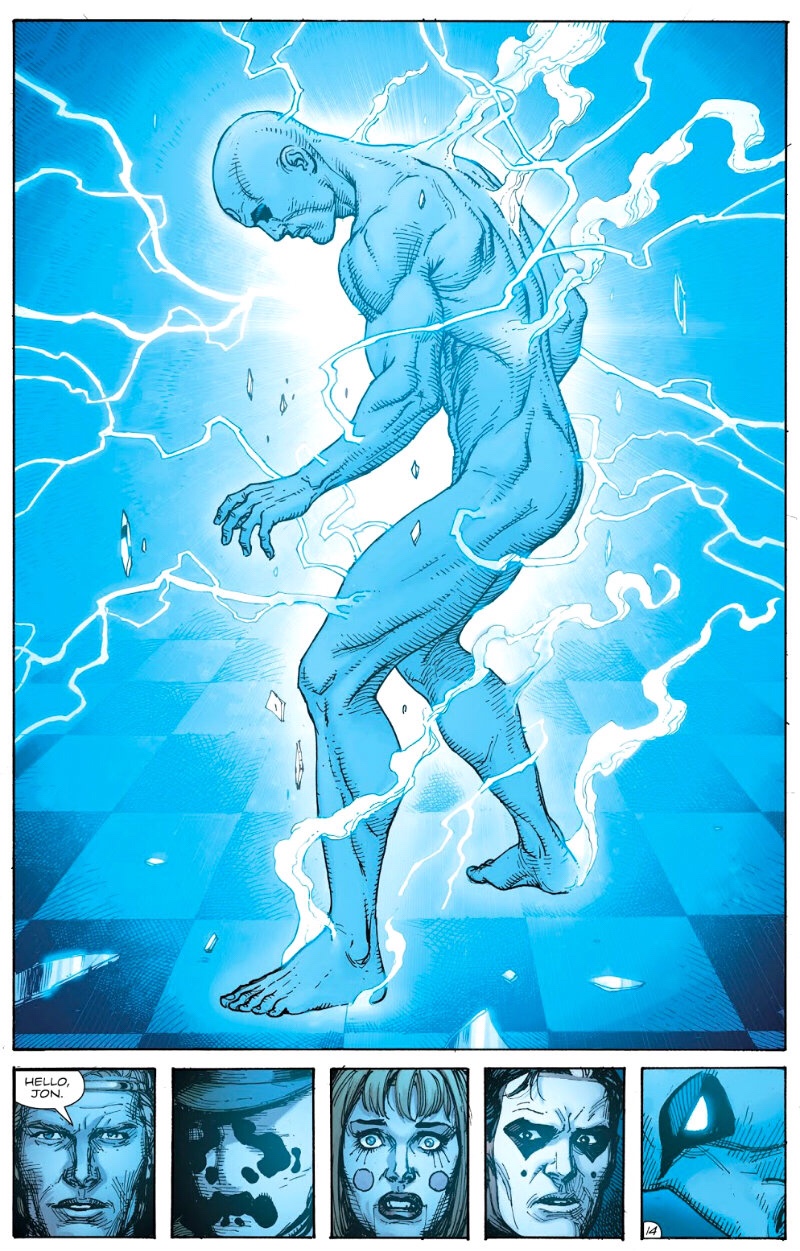 Using his powers, Dr. Manhattan teleports himself, Rorschach, Ozymandias, Mime, Marionette, the Lantern, and the Comedian to a far away location where we’re given an abundance of exposition. After all he can see everything.

First, Dr. Manhattan says he is in the middle of something. I’d bet it has to deal with the Lantern’s power clouding his visions of the future. Then we find out Mime is pregnant. Then Ozymandias is forced to come clean. He never had cancer. It was simply a lie to get Reggie working for him. I don’t know why but I was surprised to discover this information. Personally I thought Veidt having a terminal disease was a fantastic element added to the post Watchmen world. Kind of like a punishment for his earlier plot to “save the world”. Dr. Manhattan continues his Ghosts of a Christmas Carol-esque tour of the past, trying to explain exactly why he is here. We do get some information, unfortunately it’s layered in rich dialogue, it’s hard to translate any real kind of answer. Then he zaps everyone back to the Joker’s hideout. 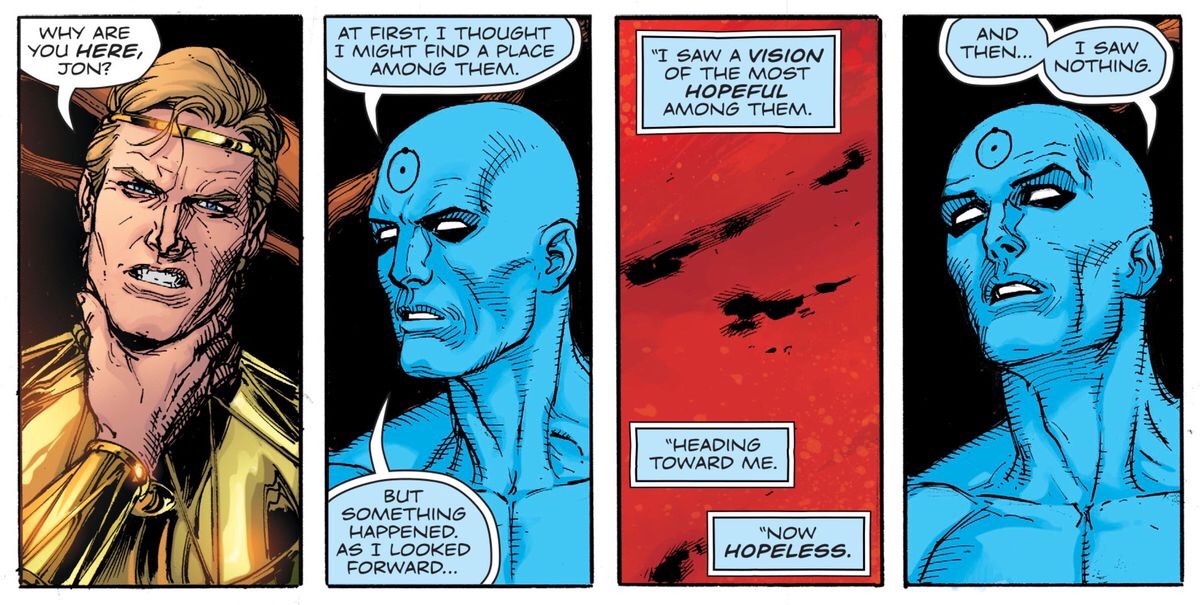 Things get messy. Mime and Marionette steal the Lantern. Rorschach goes on a rampage beating the hell out of Ozymandias and the Joker. After removing the ink blot mask, Reggie declares Rorschach is dead. Later on he mails a package to Lois Lane. Did Reggie follow in the footsteps of the first Rorschach? Will the Daily Planet receive a journal detailing the secrets of the story?

The last page we find Dr. Manhattan on Mars. He says that in one month, an encounter with Superman will take place but after it, there’s nothing. The final frames ask the question… does Superman kill Dr. Manhattan, or does Dr. Manhattan destroy everything? 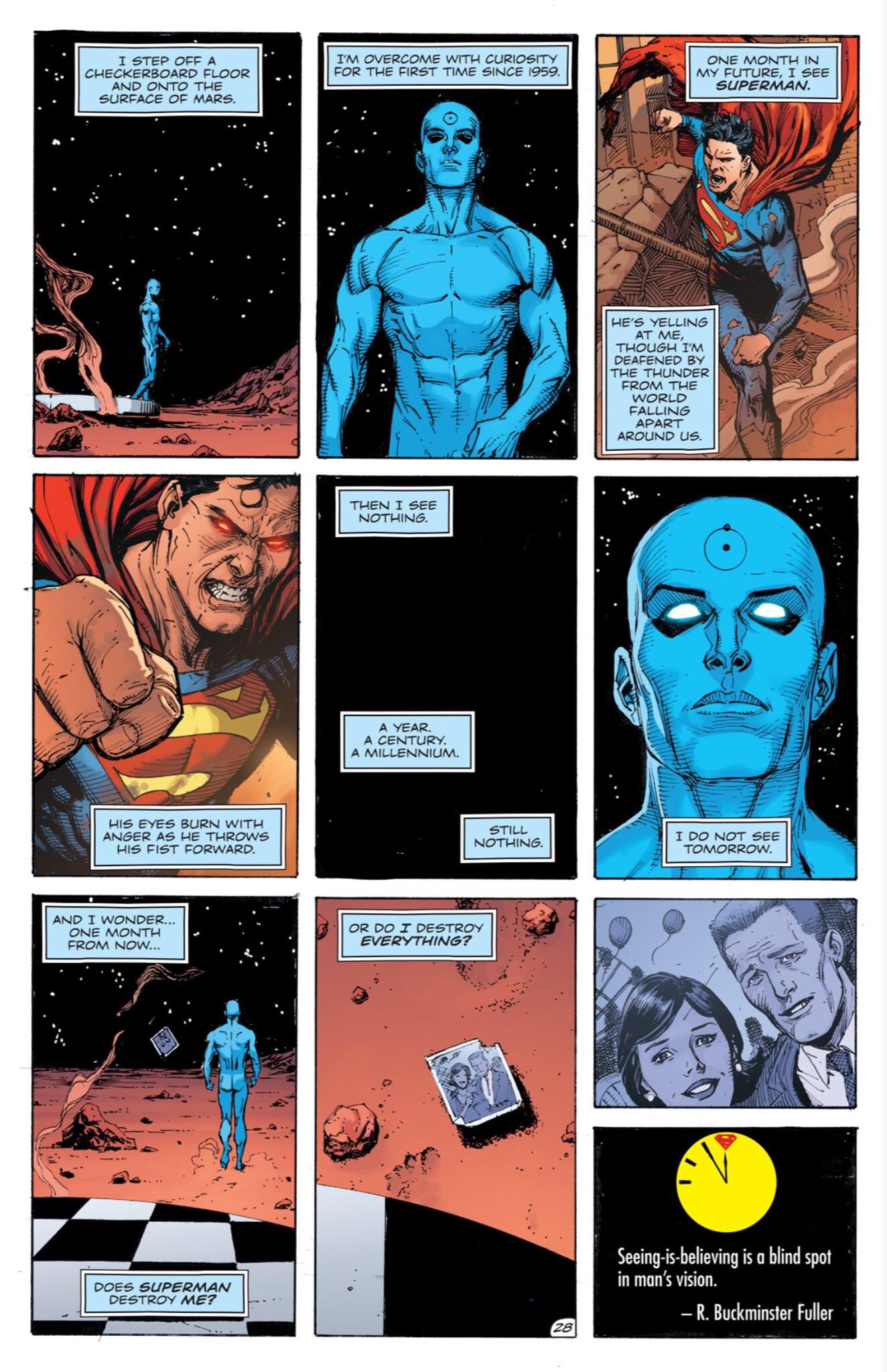 Remember, there’s still a Green Lantern in the equation.

The most important thing to take from Issue #7 is that Dr. Manhattan finally becomes involved with story. His days of brief cameo appearances will hopefully be no mas. This battle or whatever with Superman later on down the line sets up an event for readers to get excited about. While I don’t know if we’ll have to wait until the last chapter but the notion of seeing two of DC’s most powerful forces duke it out is already worth the price of admission. However we still need to know why. 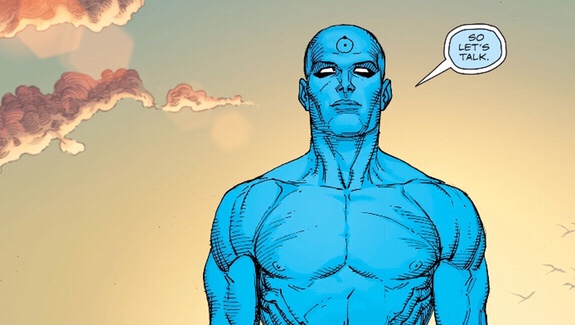 Getting Ozymandias back to a villainous role was a great move. I forgot to mention that when he returns to Archie, he outright assaults Saturn Girl and Johnny Thunder. It’s also revealed Veidt has a “plan” which is Watchmen fans know cannot be good news. When Doomsday Clock started he was cast as a scorned man looking to right the wrongs of the past. Like I said before, a fantastic twist as the series began. But you knew it wouldn’t last. At some point he has to return to his true manipulative form. That’s “who” he is. I know DC is looking for something new, yet when Watchmen is on the table… there’s only so many modifications that can be done before fans start to feel uncomfortable.

In many ways, Blind Spot is the closest thing to the original graphic novel Geoff Johns and the Magnetic Zeroes have done to date.

If you want to talk big picture stuff, the story is becoming more and more integrated into the current DC comic universe. Good guys, bad guys, new faces, old faces. The amount of comic book personalities we’ve seen so far, exceeded my expectations a couple issues ago. It really feels like Johns is shooting for the stars. But these characters aren’t just there for the sake of a cameo. They display signs of relevance no matter how many lines they get. We may not see Black Adam again until next year yet the atmospheric elements he provides, are crucial to the conflict the world around us is trying to establish. I have absolutely no idea where the story could go. When there’s a Green Lantern, nothing is off the table.

What we see here in Doomsday Clock may effect the DC Comic Universe for years to come. After all… did you think it would really stop here?

The latest issue of Doomsday Clock is in stores now. Hopefully you haven’t given up on the series.

Do you want to see Dr. Manhattan battle the Man of Steel? Let Nerdbot know in the comments!!