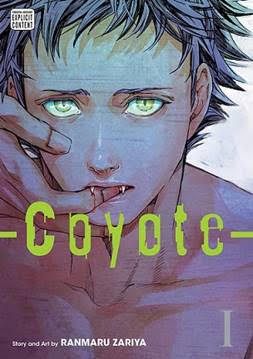 Nerdbot would like to thank SuBLime Manga for providing an advance review copy of ‘Coyote Vol. One’ by Ranmaru Zariya.

I’ll be honest when I say that I never know what to expect when it comes to Yuri and Yaoi manga. Because truthfully, there was a time in my life when I was thoroughly convinced that Yuri and Yaoi were just coy terms for porn. However, that’s a broad stroke word and a disservice to the genre. Often, the stories are the same slow burn as heterosexual romances and we’re cheering for these two same-sex, cis-gendered people to finally take that plunge. We want the romance, we want that sweet first kiss, and then we want the juicy goods to happen.

In order to conceal that he’s a werewolf, Coyote avoids getting too involved with humans. But Marleen, a pianist at a bar he frequents, is interested in him and just won’t take no for an answer. When Coyote unexpectedly goes into heat for the first time, Marleen catches him while he’s unable to maintain his human form and offers up a tempting invitation. Coyote wants to resits, but can he?

This is Yaoi, so the answer is clearly no. No, Coyote cannot resist, and sexiness ensues. I’m sort of convinced that whoever wrote the synopsis on the back of the book read the first chapter and says “Nailed it!” (pun always intended), threw this book back on the pile and read the first chapter of the next manga so that he or she could move on with their day of writing broad synopsises on the back of books.

The truth is, there’s a story here. “Marleen” is really Josh Galland, a wealthy young man whose family has a vendetta against the werewolves and will stop at nothing to make sure they are all removed from society. Thus, this is a world where the humans know the werewolves exists and they’re afraid of them. The werewolves know that the Galland family have an werewolf murdering agenda, and therefore they want to take them out as well. Our conflict lies in the fact that Josh has developed feelings for Coyote, whom he affectionately calls Lili, and knows that the second Coyote finds out that Josh is a Galland, the two of them won’t be able to take their sweet, sweet love to the bone-zone anymore.

As you can see, we have these sweet little Romeo and Juliet conflicts embedded into the book.

The artwork is very, very appealing. My favorite thing about the story is that Josh and Coyote are two adult men, both boarding on thirty years old. It’s also got some killer erotica fantasy fan service because while Josh is long haired and pretty (think Tom Cruise as Lestat, but in manga style) Coyote has that whole damaged punk rock Sid Viscous look going on that’s also rather tasty.

Now, to wrap it up, often in the world of Yaoi I have zero interest in reading the next volume. Because in my experience with the limited amount of Yaoi I’ve read, the story is just not complex enough to make me want to move forward. But with Coyote, there is an actual arc happening alongside our tasty naughty scenes. And really, I’m curious to see where the adventure with this star-crossed pair will go.