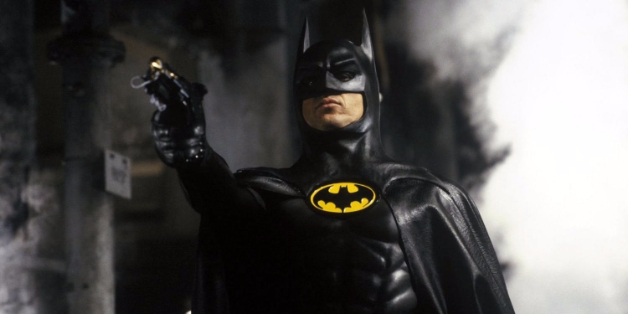 Batman – Bruce Wayne to the uninitiated – is a stoic, grim guardian of Gotham City and all those in need. Responding as a broken man to the death of his parents by criminals, he becomes a Dark Knight, a hero under the cover of darkness to fight the forces of evil. Even his greatest enemies, he believes, have some good in them. Batman will stand tall and face down gangsters, gangbangers, and super-villains but he will do so knowing that it is not just their fault: society helped to make these monsters in the same way that society made Bruce into Batman. Maybe, Batman believes, anyone can be helped. Anyone can be redeemed…

And to fight crime and maybe bring hope to the hopeless, Batman becomes both a physical marvel but also the world’s greatest detective. A man of physicality and brilliance. A man of humanity and brains.

Well… uh… That’s the Batman most commonly seen in comics, video games, and animation. Not so much the Batman of the big screen. Batman of the comics is a heroic, father figure who is also a bit unhinged but still caring and highly intelligent.

If you’ve only seen the movie versions of Batman, not so much. Then, Batman is a violent idiot. A crazy protector. 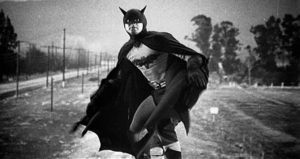 I have to point out that the end of the movie involves Batman and Robin basically screwing up re-hydrating the UN – yes, that’s a real movie plot – and now everyone is speaking a different language. The implication is that they have switched brains or something. Rather than being horrified at ruining the lives of a handful of people, Batman muses that, hey, maybe this will help fix the world’s problems.

No, Bruce, it will make you a sociopath who gets off by joking about ruining the lives of innocent victims.

The highlight of this version of Batman is the brilliance of just blowing up Axis Chemicals. Batman, the Dark Knight Detective, surely knew Joker was using Axis as a hideout or, hey, at least check it out. Or if he didn’t, then he’s just blowing up a building that could be full of innocent people.

Batman: He won’t use guns but he will blow things up and throw guys down buildings to their death. Though I can at least give Burton’s version a little bit of a pass because it’s clearly a very artistic film. That is, Burton prefers the visuals over the logical frequently. So, punching a man to his death down a stairwell in a church looks really cool. Why ruin it by having Batman find his broken, mangled corpse at the bottom?

Batman shoves a bomb down a guys pants. There isn’t even a question on how badly murdered this poor thug was, as he immediately blows up in a hole. That guy wasn’t even that high up on the deadly scale. He was like a junior thug in training, blow up when his crotch was ripped apart in an explosion. Ouch.

But this is the same Batman who has to look over the edge after a woman falls to her death and then is shocked that people would blame him, so…

Yes, I am skipping 2 movies because they are fairly awful and BATMAN USES A BATMAN CREDIT CARD. It’s not even fair to point out what a psychopath that guy is. So, I jump ahead to the next decent Batman film. Bruce joins the League of Shadows. He steals. He probably kills people. Somehow this is the best way to learn how to fight crime in Gotham, apparently.

Batman eventually decided that he won’t kill Ra’s al Ghul, but he won’t save him. In doing so, he is allowing a train with Ra’s al Ghul to fly off the rails and run into a building. This is perfectly fine, though, because the only way to clean up Gotham is to cripple criminals. Not, say, use your enormous fortune to start a youth outreach problem or a hospital for the people who are going to suffer lung problems from the cleanup of the train derailment.

In Nolan’s all-too-realistic version of Batman and in one the grandest movies of all time, Batman decided saving his lady friend from falling off of a roof outweighs the problem of leaving an entire party full of guests with the Joker. Now, that might not be so bad in 1966, but this version of the Joker is a ruthless murderer. He isn’t so much about what is or isn’t funny, but rather chaos. Joker surely wouldn’t just killed everyone in that roof to show Batman what a failure he is.

“Want to know how I got these scars? Batman left me in a roof with the Joker so he could save a lady on a roof.”

In the comics, Batman is the guy who doesn’t retire or give up. His is a quest to rid the world of crime. In doing so, he destroys his body and will very likely die at the hands of a villains saving Gotham. In Nolan’s universe, Batman just kind of retires after his friend turns into Two-Face because apparently all the crime in Gotham just stopped.

Bruce also decides that he can use his bionic knee to kick through stone, but not kick the ass of a feared, violent terrorist. Nah, just punch that guy. And he will beat up mentally ill men – like the Joker’s henchmen – without question but he won’t use any of his myriad of useful gadgets on Bane. It’s almost as if Nolan’s Batman exists in a world where Batman took out a mortgage on his home…

Oh, wait, if they let him keep the house, that implies the bank owns some portion of his house? And that the Gotham Stock Exchange was robbed and no one was able to think that maybe all the weird transactions Bruce Wayne did was somehow related to that robbery? Maybe everyone is just stupid in Nolan’s universe but the Joker.

The World’s Greatest Detective, star of Detective Comics, who famous has a cave full of detection equipment, has never met Google and doesn’t pay attention to the evening news. We know this, because he doesn’t immediately learn the name of the ship owned by Lex Luthor, one of the richest men on the planet. I can guarantee if you Google the name of one of the richest people on our planet and a name or world, there’s going to be some article on some web page about how Person X loves yachts and owns Boat X.

Batman then IGNORES a news report that basically says the attack that sparks his murderous rage were only made to look like Superman did it. This makes perfect sense, as this Batman absolutely shots and murders a bunch of henchmen and security guys. I get that maybe murdering the guys who kidnapped Martha Kent could be justified. But what about the guys in the car who were literally just security guys for Lex Luthor? How did Batman know that all of those guys weren’t just union dudes shipping a package?

Batman: “I must protect my identity at all costs to keep those close to me safe.”

Also Batman: “I think I will go dressed as Bruce Wayne to go find Aquaman. I’m sure none of those people in the town will tweet about how Bruce Wayne showed up. It’s not like I’m one of the most famous people on the planet.”

Also Batman Again: “Then I will try and revive Superman in the big machine that Lex used to make a giant, violent monster that none of us could stop. I’m sure it’ll work way better this time.: 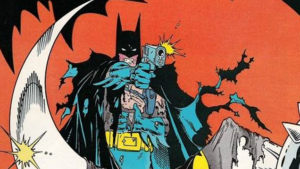 Batman in the movies is a lot like Captain Picard in the Star Trek movies. You take away all the subtly and cultural nuances and just have him blow crap up, like, all the time. It’s lazy storytelling that can occasionally be brushed aside as an artistic, visual choice. But when you’ve got a Batman who will straight up murder some random security guys and NOT the Joker who murdered his partner, you have a violent idiot. If the same Batman can’t do even basic detective stuff like, say, use Google to look up a name… Then, yeah, that’s no Batman I know.

That’s not even Zur-En-Arrh Batman.

At best, that’s like a drunken Bat-Mite from the Dark Night Returns universe.