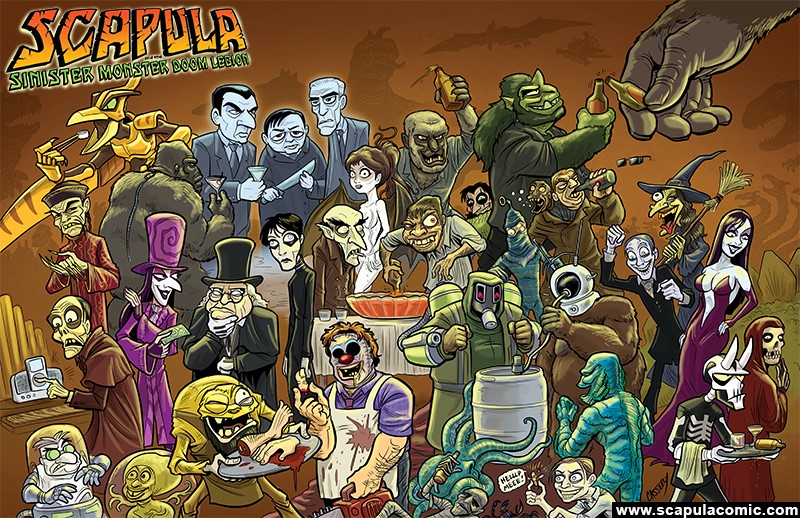 I met Aidan selling his comics at Dark Delicacies in Burbank, THE place for all of your obscure Horror collectible needs. While the original meeting was during a Mystery Science Theater 3000 event, I couldn’t help but become fascinated with Aidan’s work. His art style and comics are so vivid, the horror inspired artwork so incredible, that there was no way I couldn’t reach out to him for a Nerdbot exclusive interview! 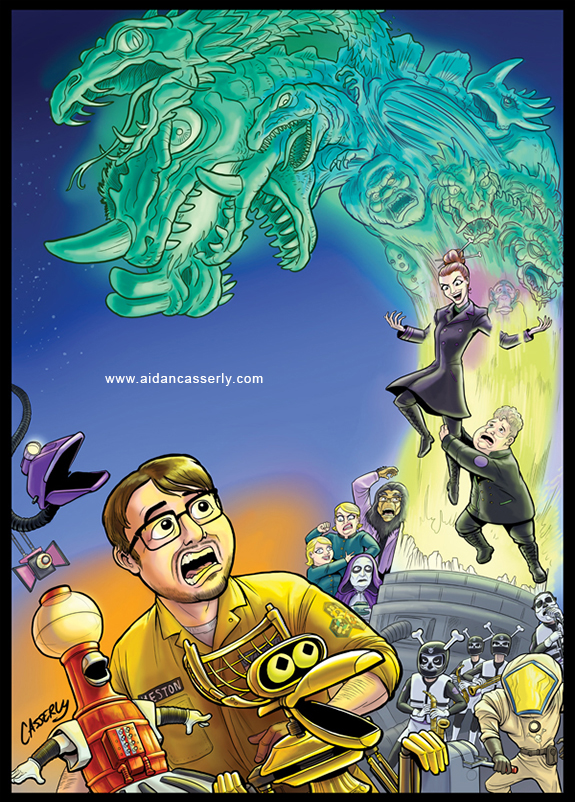 Hi Aidan! Thank you for giving Nerdbot this interview. We’re so excited to have you. Can you tell me a little about yourself? What was it like for you growing up?

I think a lot of young cartoonists are set on their path to life the day they realize that math and history classes are boring as hell and notebooks are best used for being covered in endless sketching. I was that weird kid in school, which pretty much lasted from kindergarten to the end of college, but at least I had lots and lots and lots and lots of cartoons to draw.

I somehow survived and started to make a living in RealWorldLand as a freelance artist; most of my career has been doing storyboards for film, animation, games, and commercials. Comics are still my biggest passion, and I’ve kept on creating my own characters and stories to keep me mostly sane. 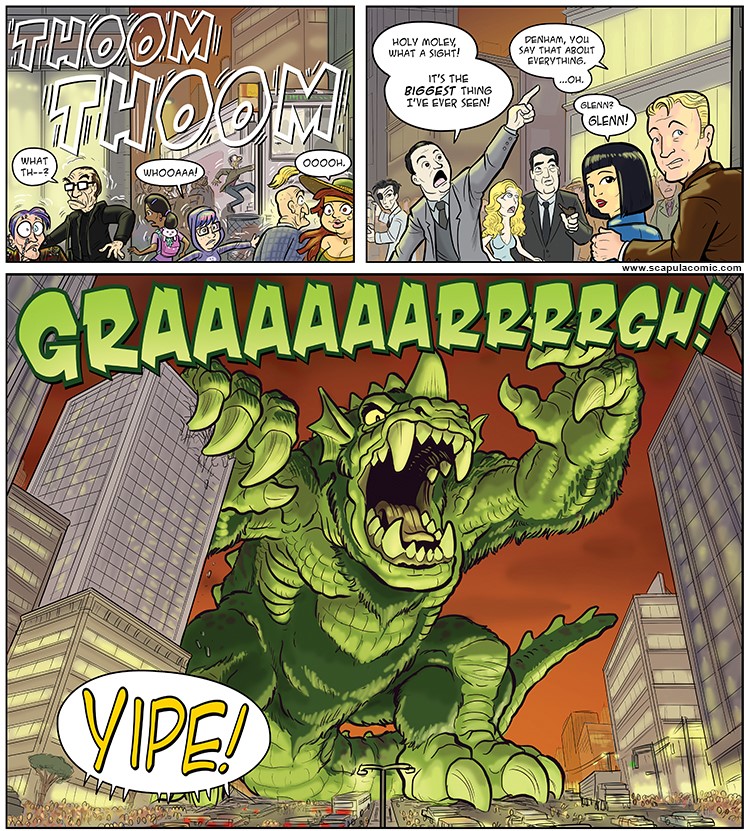 I see that you draw from a lot of horror movie elements. What elements of horror do you feel inspired by the most?

I’m a raging fanboy for classic horror/ sci-fi and own a ridiculously huge collection of monster movies. A lot of my favorite stuff is the gothic horror films from the silent era through the forties (Universal basically ruled that roost), along with the kaiju genre where Toho and Tsuburaya really let loose.

There is so much sheer imagination in a lot of the best of those films (and even some of the stinky ones have a lot to offer, especially if you’re a Mystery Science Theater 3000 fan!), and I’ve referenced a lot of that material in my work. You can see a lot of it in both Scapula (particularly the main character’s wax museum lair) and an annual art book series that I self-publish, Dada Hyena’s Creature Show.

Do you just like throwback horror or is modern stuff interesting as well?

I’m not often super-crazy about modern horror (that’s just my personal taste), but I also acknowledge that there’s only so many times you can revisit the past. If people are finding new tales to tell and new creative ways to tell them then by all means more power to them. Tell the stories YOU want to tell in whatever way you think works best, even if it is for some poocrap straight-to-DVD pulled-out-of-the-dollar-bin movie.

…of course, I can still go back and watch Robot Monster on occasion, right? 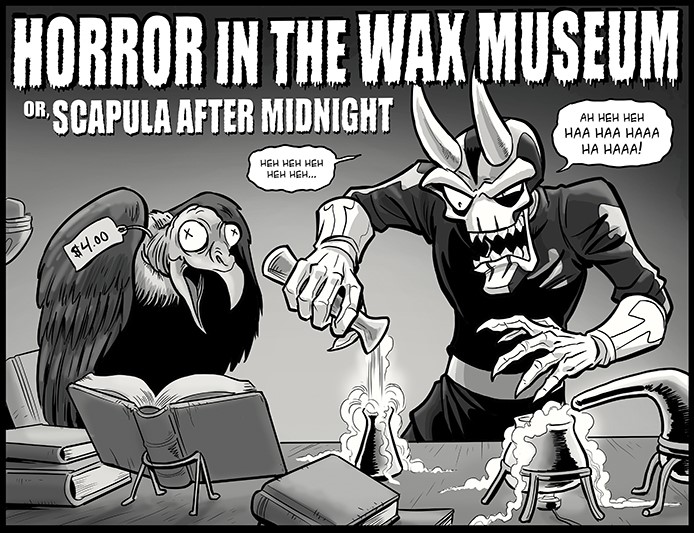 Who is Scapula? Tell us about him!

Scapula is a great big grump.

Aside from that, Scapula is a creator-owned comic series that I’ve been self-publishing since 2007. It started as both an indulgence in everything I loved about comics (super villains and monsters with a MAD-esque tone) and also a handy emotional dumping ground for the frustrations and difficulties of being a working independent artist (and weirdo). Writing and drawing Scapula has gotten me through a lot of rough patches in life, along with just being a fun outlet for me to be creative without any outside editorial demands.

Scapula ran as a webcomic from 2008 through 2015 (the first four years as a full-color Sunday page only, the last three with the insane update schedule of four comics a week). The series is currently published as special magazine-sized issues, the most recent one being Scapula and the Sinister Monster Doom Legion. 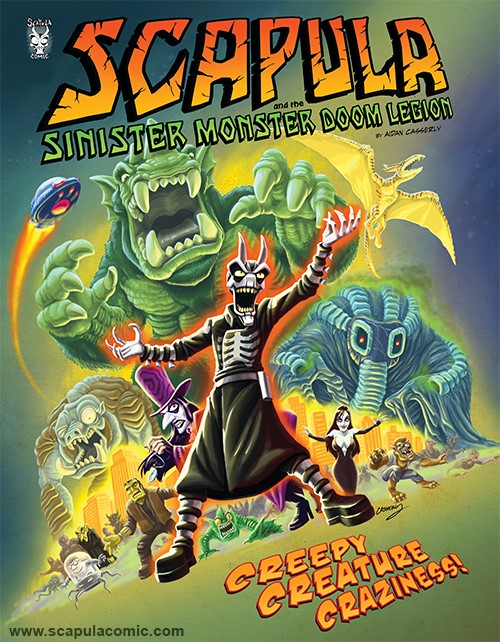 Why the world’s “worst” villain?

Villains in kids’ cartoons and comics have always appealed to me for one simple, sad reason: they always lost. The bad guys in cartoons were usually pretty harmless when you looked at the scoreboard (maybe this was done to discourage kids from being…I dunno, evil?). I got bullied a lot growing up, so it was hard to relate to anything where the hero was flawless and won every battle. I ended up relating more to the villains, especially the ones who were very obviously out of their league; this was probably the genesis of Scapula.

It’s actually been quite liberating to write a protagonist who isn’t a hero (or even likable at times), since it’s helped me work through a lot of unhappy thoughts and emotions that are best handled productively instead of with a sledgehammer and some jerk’s car-window. Maybe that’s one of the big appeal of villains and monsters in fiction: they help us work through our pain and negative thoughts in an creative or even introspective way…or maybe it’s just fun to draw giant robot dinosaurs knocking over buildings. 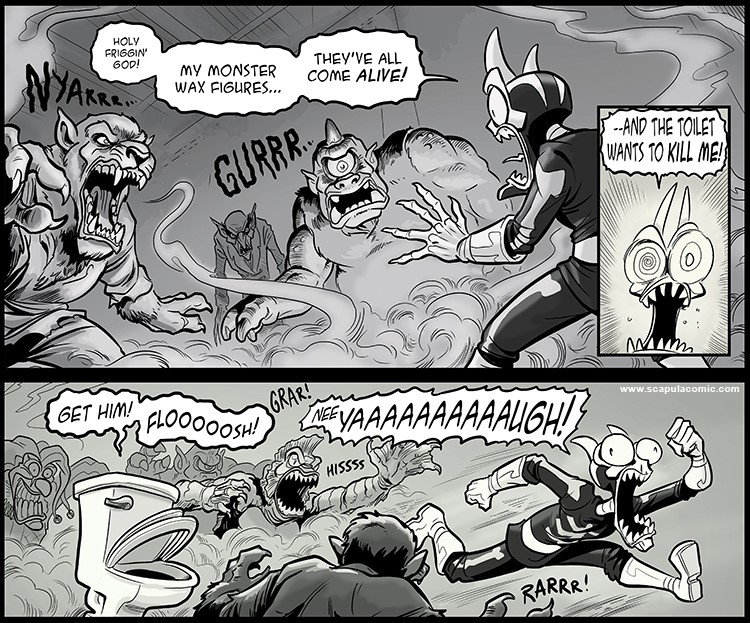 I love the goth girl you draw. Is there a story behind the creation of her?

But…but there’s so many goth girls I draw! I love ‘em…hell, I’m getting married to one!

While a lot of the comics I draw have goths sprinkled in ‘em (such as Bone China or Nazz in Scapula), the most long-lasting one is Christie, a dreadlock-topped candy-goth girl of the plus size variety. Christie was the star of my first webcomic, Dada Hyena (2005-2009), and made the occasional cameo appearance in Scapula and other comics. She returned in a Patreon-exclusive story that ran in February 2018 and will have another substantial role in the upcoming 2019 issue of Scapula. 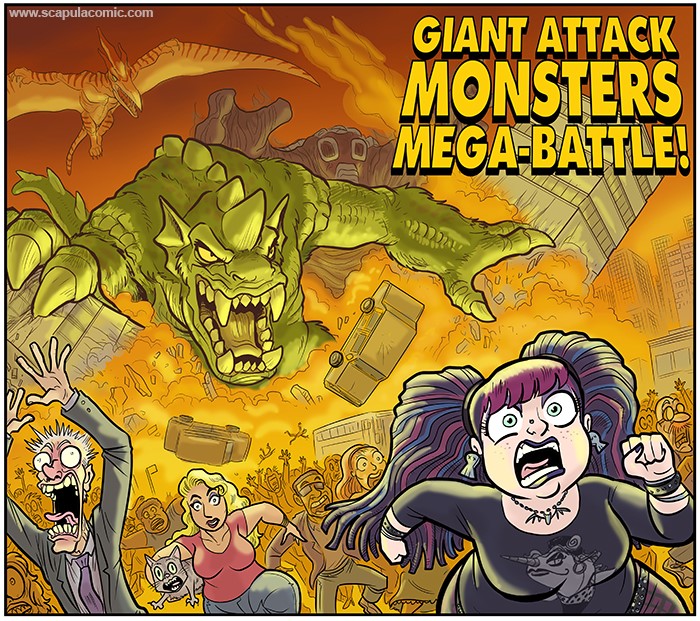 What are some of your favorite comic book series?

Hope I’m not being snobby by saying this (or biting the industry), but I haven’t really followed any monthly titles since my school days. I just sort of find new stuff as I go (“new” as in ‘new to me’, chronologically it could be made today or centuries ago) and there’s a lot of great things in comics waiting to be discovered by every reader who’s willing to look.

Comics that have had the biggest influences on me are Calvin and Hobbes by Bill Watterson (which is what made me want to draw in the first place) and the original Steve Ditko Amazing Spider-Man run. I think these two were the biggest inspirations for not only Scapula but my other comics work, even if the similarities aren’t always obvious.

Do you have any cool hobbies or interests?

Probably trying to find ways to sleep comfortably after drawing all friggin’ day!

Are there styles and genres that you have experimented with that go beyond Scapula?

Outside of Scapula and comics I keep the Halloween-vibe going in the rock world with a ghoulishly great band called the Rhythm Coffin; I design and build props and costumes for the live stage-shows and even perform in various monster-guises. They’re absolutely wonderful fellow freaks to work with and it’s always a huge amount of fun, even if it’s exhausting to play Frankenstein or the Creature from the Black Lagoon while sweating through my (always black) clothes! 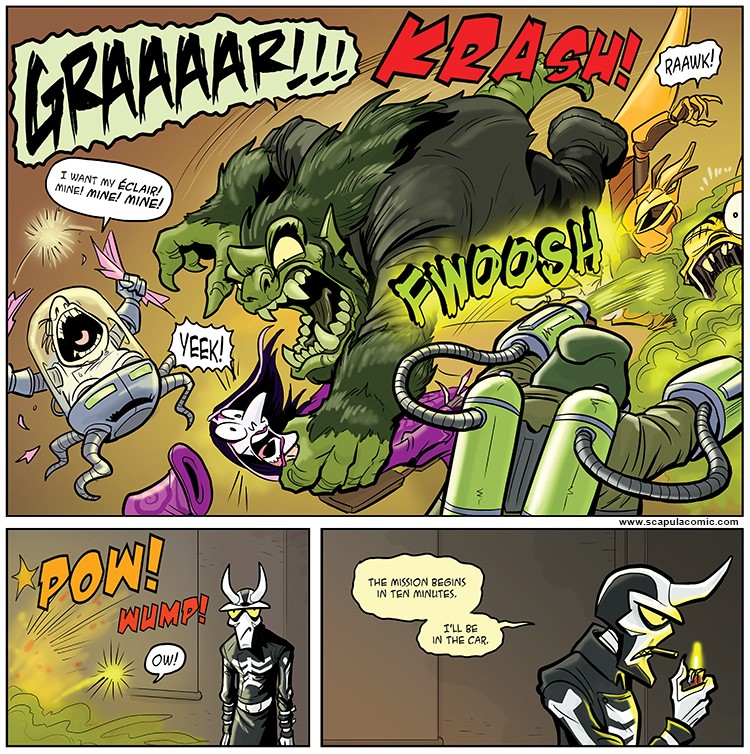 You write and illustrate your own work. How long does it take to go from thought to final product? What are some of your biggest challenges?

Back in the webcomic days, when I gave myself a strict deadline, things were often pretty hectic. It could take a few hours from pencils to inks to colors to letters to make a single Sunday page (dailies were much faster, since they were shorter and originally not in color). Now that Scapula is made in a traditional comic book format it takes much longer; that combined with my storyboard work schedule is the reason why I don’t do a monthly publication.

Scapula and the Sinister Monster Doom Legion was done off-and-on in a little less than a year (again, while balancing a full-time storyboard job), but I’m glad didn’t rush through the creative process. Although the old webcomic schedule pushed me to produce new content routinely and without delay there’s also something to be said about having the freedom to relax, study, and experiment with your art. I think this issue was much stronger for that and is also the approach I’m taking for the next one.

The webcomic is great and I love Scapula so much, do you have any plans for him beyond your comics?

Scapula in animation could be great; I’ve storyboarded a few samples just for personal tests (some of these can be seen in the book collections). Heck, I’d be fine with a stage show with an Alice Cooper-flair and big, ridiculous monster costumes representing the Scapula characters! LET’S DO IT PEOPLE, I CAN GO GET ANOTHER FRIGGIN’ KICKSTARTER TOGETHER…! 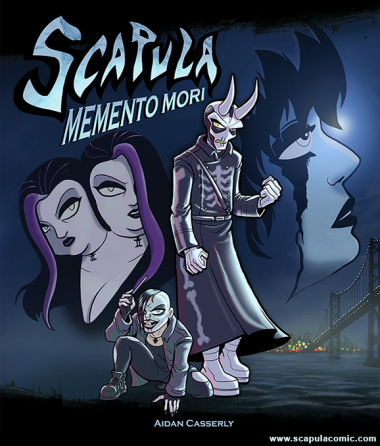 You have an option on your Patreon for custom drawings. What is the weirdest thing anyone has ever commissioned you? Can you tell me?

I’m eternally grateful for everyone who supports my art (and me, too), and the Patreon backers have been some of the best fans I’ve ever had. I try to reward them by frequently taking drawing requests, and even though I’ll draw most anything I always encourage people to be shamelessly stupid with their ideas. We’ve ended up with a lot of weird stuff, like a Three Stooges/Marx Bros gang war, Lovecraft monsters and zombies playing hockey under flying ponies, Muppet Babies X-Men fighting the most horrible species of snail on earth, Super Mario getting wasted and imagining a Joan Crawford princess is out to get him, and on and on…God, those folks are disturbing!

When did you start going to conventions? Do you have any appearances in the next few months?

I think I started doing conventions around the time I made the first Scapula comic, which was printed and sold as a zine. I try to do as many comic and horror conventions in California as I can; sometimes you find great ones, sometimes they stink. You can find out more on my social media about what shows are coming up.

There are some awesome stores in southern California where I attend on special occasions to do caricatures and sell comics, and I’m particularly grateful to the folks at Dark Delicacies, Black Cat Comics & Collectibles, Toy-Zilla, and Arsenal Comics & Games for their support in having me come in and make a lot of silly voices.

How can we keep informed on what you’re up to?

The best place to find new art and to support future projects is on the ol’ Patreon page which includes a lot of exclusive news and peeks at new art and comics in the making. I try not to let social media take over my life (aw, who am I kidding…) so I mostly keep it to Facebook and Instagram.

Thank you everyone and keep enjoying the freakshow of life!