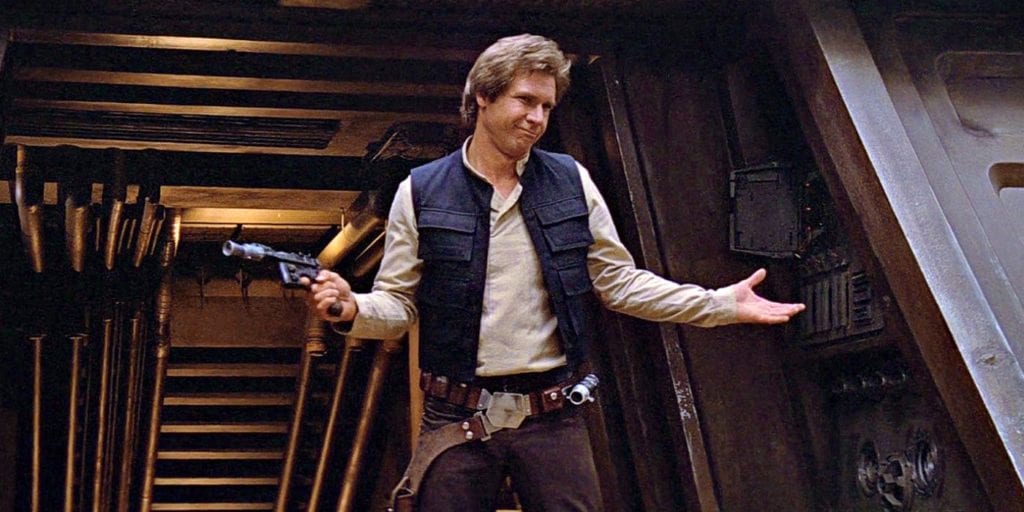 You love Star Wars. There’s nothing more epic than watching Luke Skywalker go from being a whiny farm boy to a wise whiny Jedi. The original trilogy is something so legendary that it should be encased in carbonate, never to be enjoyed outside of think pieces! It’s near perfect, and the most influential work of cinema in the history of film-making.

If there’s one thing we can agree on about The Last Jedi is that it’s possibly the most divisive Star Wars of all time. You hate it because it takes characters in directions that aren’t your specific expectations for those characters. You’re sickened that it takes this beloved franchise and dumps on everything you love about it because of it’s gaping flaws and plot holes.

“How do people love this?” you ask. “How can they look past these flaws?”

Follow me (a Star Wars geek/fanatic from the age of the VHS) down this Sarlacc pit of horrible plot holes in the most sacred Star Wars movies.

I will keep it Last Jedi spoiler free btw, although you should go in as fresh as possible.

Let’s start with the obvious.

If Darth Vader is Luke’s father, then it’s really stupid to keep his last name Skywalker. Sure, Luke is out in the middle of nowhere…with Anakin’s family. Whoops. This isn’t just a plot hole thanks to the prequels either (which I will avoid in this article to keep things pure, original mistakes). This is built right in thanks to the twist in Empire Strikes Back.

I bet Vader is kicking himself for skipping all those Thanksgiving dinner invitations.

Let’s fast forward to the thrilling escape after our heroes rescue Princess Leia. Or rather, Leia saves the boys as they try to be heroic. How did they escape though? A moon-sized station full of troops, and they get out? Oh, wait! The Empire let them escape so they could track them to the Rebel base. Sounds good enough to me.

Until you realize Leia has figured this out and knows they must have a tracker on them. So they make a pit stop at the local Circle K and check for a tracker, right? Or they call a few friendly ships to meet them somewhere else and transfer the plans. Or…they head directly for the Rebel base. Well, it’s a good thing Leia didn’t just see the full power of the Death Star and what it’s capable of.

Don’t worry; the Empire is just as dumb. Like the aforementioned statement, the Death Star is the size of a friggin’ moon. How many Tie Fighters do you think you can fit in that thing? A few, I imagine. Probably a little more than what we see face the Rebel squadron. Why not completely overwhelm them?

This is especially frustrating because there’s a point made that the Imperial forces realize there’s a weakness being exploited, thanks to studying the attack pattern of the X-Wings. Put all your Tie Fighters right over that exhaust port, right? Meh, Tarkin decides he likes a damn good story.

Not to mention, the Empire tracks the Millenium Falcon to the Rebel base and sends the one ship they know their enemy has the plans for. How about a couple of Star Destroyers to set up a blockade or something? Oh, because the Rebels don’t even try to evacuate. Leia, come on, time for “Plan B” just in case.

The Empire Strikes Back

Oh, this is the perfect one. We all know that.

The Empire finally does kick out the fleeing Rebels from their first base. Now the Rebels set up to give Luke the exact opposite living conditions from his home planet. They dig tunnels, set up computers, build a giant boob gun, and encase the icy planet in a snuggly shield. How long did that all take? Yet, they tell Han he can’t look for the missing Luke because the speeders haven’t been adapted to the cold yet. Priorities. Maybe someone just forgot to do this and had to cover when Han started asking questions, considering they get those speeders up and running the very next morning. Convenient.

Don’t worry everyone, once they get those speeders going and rescue Luke, the Rebels are in good shape. Luke is a fantastic leader who knows just how to get the squad into action against the approaching AT-AT’s…by flying head-on at the only direction those lumbering pieces of metal can fire.

Approach from any other direction, and you won’t lose a single speeder!

That’s all hindsight though, right? Just tactics that didn’t work, not plot holes. There are a couple awkward, science-defying scenes in The Last Jedi, and that’s far worse than this.

Oh really? Let’s take a look at our heroes escape from Hoth. The Millennium Falcon is living up to its piece of junk description, and Han lands her inside an asteroid for repairs. This is when they decide to go for a walk out in a cave with a direct opening to space with nothing more than little masks. If that’s all you needed to be directly in space, NASA probably would have designed some suits for our astronauts that don’t look like the Michelin Man.

But it’s a space worm, Chris! Well, even if I didn’t point out that it’s just sitting in the asteroid, mouth agape like I used to in math class, the gang thinks they’re walking out into the vacuum of space. I’ll put this hose on my face, good enough.

To top this movie off, Luke falls, like, a thousand feet into a DZ Discovery Zone slide with no injuries. (Except his already missing hand). Star Wars fans don’t talk enough about that leap. It’s crazy that’s just acceptable in the movie, right?

The Return of the Jedi

Wow…where do I begin here?

For starters, Luke is suddenly even stronger with the Force than he was at the end of Empire Strikes Back. He hasn’t returned to Yoda yet. Obi-Wan is dead. Um, so what happened? Everyone calls Rey a Mary Sue, able to do anything and everything. Yet, here’s a perfect example of Luke suddenly having abilities he shouldn’t have. Didn’t he train for just a few days too? The movies never explain if he did more training anywhere or how he managed to construct a new lightsaber. Any details on this are from comics, deleted scenes, or books. That doesn’t count when defining how good a movie is.

Here’s a little thing about the pacing too; a lot of time is spent resolving a plot point created just because they didn’t know if Harrison Ford was going to return. We really don’t get into dealing with the Empire at all until the second half of this supposedly climactic ending of a trilogy.

Plot holes are now stumbling over each other. Leia is revealed to be Luke’s sister, also not planned at the beginning, or even during the filming of Empire. Lots of awkward scenes we now get just to have another twist. Her name and lineage are hidden far better though. Why was there so much laziness with Luke?

Leia is also in a much better position to be an influence on the galaxy. She’s a senator, or royalty, or both, or whatever, but the point is, she has a say in government in some way. She is the adopted daughter of a leader in the Rebellion, why isn’t Obi-Wan watching her instead? Train her to be the Jedi, not Luke. It seems like a lot more could get done.

Speaking of getting things done, the Emperor reveals he knows that there’s a pitiful band of Rebels trying to blow up his shield generator. Once they capture Luke, why doesn’t he just send in bomber squadrons and carpet bomb the hell out of that forest? Certainly, he isn’t trying to respect the Endor National Park.

There are quite a few plot holes during the throne room scenes. The Emperor sends his guards away for no reason. His plan to turn Luke to the dark side consists of being obviously evil while repeating “get pissed Luke, good, throw tantrums, good.” He offers Luke nothing tempting, even if Luke kills the Emperor, the fleet is still in peril. He tries to tear Luke away from his father, when he should be exploiting that vulnerability.

Lastly, the Emperor, the most powerful dark side user, gets tossed like a sack of potatoes down a poorly placed shaft because he can’t stop himself from being lifted up.

The Legacy of Star Wars

Okay, I think I’ve even had enough tearing up this franchise.

I say all of this not to bash the original trilogy. I love Star Wars, I grew up watching Luke turn into a Jedi, Han overcoming his selfishness, and Leia kicking ass wherever she went. What they mean to me as an adult hasn’t changed, and I appreciate them more every time I watch them.

My point to all of this is simple, any and every movie has flaws. Some have more plot holes than others, but no matter what, they are there. It’s human characters, acted by human people, written by human writers, so there’s bound to be an error or two.

Loving a movie comes from being immersed in the characters and connecting to some deeper feeling from watching. Those plot holes suddenly have defenses, if they’re even noticed at all. Watching movies isn’t about them meeting your specific expectations, they are about a story that is a part of the journey where filmmakers and audiences connect somewhere in the middle.

The difference many times between completely subjective terms of “good movies’ and “bad movies” is simply the ability to suspend disbelief. Whether it’s because of the characters, what they are fighting for, or what they represent, Star Wars has always been about immersion into a galaxy far far away.

That galaxy is only getting bigger, and that means new fans, new hopes, and new inspiration. Dislike any of the new material all you want. When you meet someone who loves them though, it doesn’t mean they are stupid for liking something you see as lacking real “Star Wars” material. They see things differently. It doesn’t mean your wrong either. Art is subjective.

It’s worth celebrating those new additions to the fanbase. I’ve already seen new super fans, thanks to these movies, who go back and appreciate the originals in a way they didn’t before. That’s something special. Don’t take away that spark just because you want to prove you are right.

We are all just Rebel scum after all.

What inspires you the most from the Star Wars saga? Let us know in the comments below!