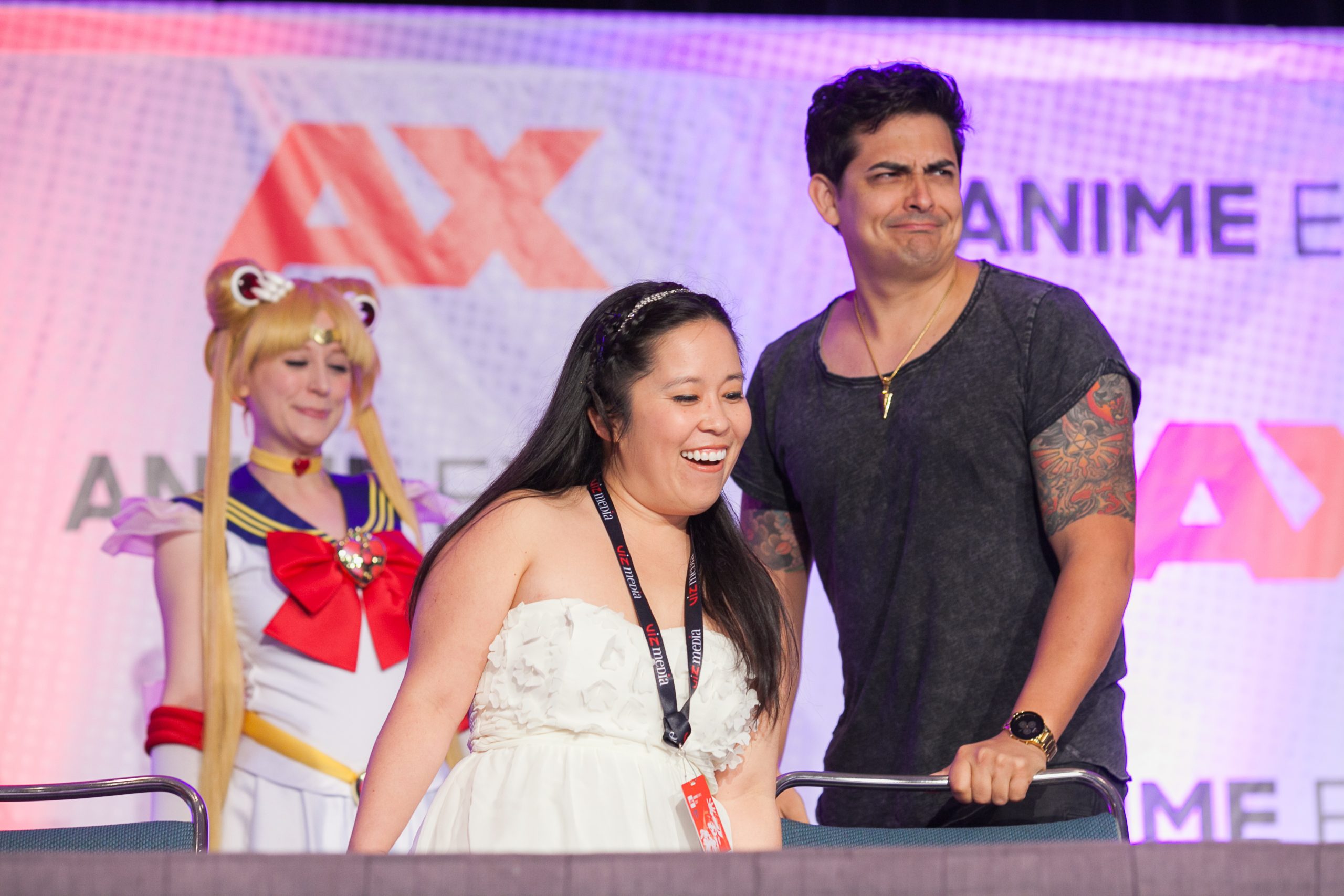 On July 3rd at Anime Expo, Viz gathered hundreds of Sailor Moon fans for their self proclaimed “Sailor Moon Day” aka “Moonie Monday”, named after the famous Instagram hashtag. Industry, Press and Attendees lined up to be the first to hear all the new updates that Viz Media has to offer us on our favorite and most popular magical girl group. They gathered some of the most talented Sailor Moon cosplayers to accompany the entire main English Voice Cast of their newest released dubbed season to the stage. The actor for Tuxedo Mask and the actresses for every single Sailor Soldier, (with the exception of Veronica Taylor, who was unable to attend due to a previous commitment in Ireland. In lieu of her appearance, she sent a video of herself pretending to fly through the air while making jokes, apologizing for her absence.)

In addition to being educated on all the new DVD, manga and merchandise releases (including sneak peaks of a specially released manga with colored pages, and an introduction to the new Tuxedo Mirage Memorial Ornament Box) we got to hear hilarious and intimate stories during a Q&A with the cast.

At the beginning, Stephanie Sheh (Sailor Moon) entered to immediately have her chair held for by the heartthrob, Robbie Daymond (Tuxedo Mask), much to the crowds Delight. The other actresses confirmed that Stephanie had become a “real life Sailor Moon” citing a time they were at an event near Disney World and Stephanie had to give them a pep talk not to give up on being able to experience Disney World to the fullest and to always go for what they want. They spoke a lot of their relationships with one another outside of the studio. One year they did a gift exchange, and three of them showed up with the same gift (purchasing each actress a pair of socks with their character they portrayed printed on them.)

The major part of the interview was when they reflected on their teenage years, and their transition to adulthood. Amanda Miller spoke of how she accidently agitated a TSA security officer by joking about their “being bombs in her hair”, and neutralized the mood by telling him she played Sailor Jupiter. This isn’t the only time she mentioned Makoto to get out of a jam, she also said she forgot her ID once at a bar and said “I’m old enough to drink, I promise! Just look at my Wikipedia page!” Every story she told was met with a roar of laughter from the audience.

Christine Marie Cabanos admitted that during her teen years, she had some pretty Saturn-esque vibes during her high school phase. She told us she used to wear her bangs to cover her face and asked the audience if they knew what “Tripp Pants” were before declaring that she wore those too. (Because, personally, even if you leave the Hot Topic, the Hot Topic never leaves you.)

Erica Mendez (Sailor Uranus) chimed in a very intimate story of her life, where she suffered from social anxiety and had a lot of trouble speaking in public and so freely, and she felt happy that she was able to converse with everyone in the audience and pursue a career in voice acting. (And judging from her impressive list of roles such as Ryuko, Akko and Nico, I’m pretty grateful she found her voice as well.)

If you weren’t able to attend, go through the #moonpanel hashtag on instagram and twitter, and check out the https://www.viz.com/ for more updates!

Have you been to Anime Expo? Let Nerdbot know all about it in the comments!