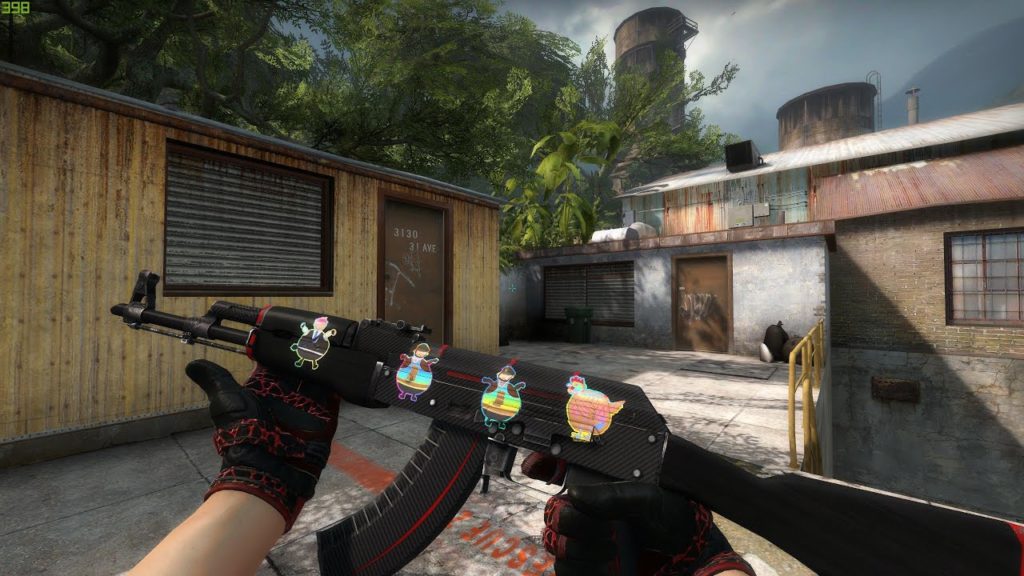 CS:GO stickers are in-game items that can be obtained in multiple ways to adorn your gun. There are plenty of different stickers in CS:GO with various properties. Some of them cost 0.10$ and can be acquired by literally everyone, while others are rare as hell and owned by very few people. Today, we want to present you with the top 5 rarest CS:GO stickers that will cost a fortune to buy.

But if you want to hunt some of the stickers we are about to show, we can recommend one interesting tool. At this CS:GO case site, you can open different cases and try to get the rarest CS:GO items in a matter of a few cliques.

Titan (Holo) Katowice 2014 was released to the game on march 6, 2014, as one of the items from EMS Katowice 2014 Legends. The “Legends and challengers” update came out simultaneously with this Titan sticker.

The design of the sticker is quite simplistic and straightforward. First of all, it has a holographic film, which applies a unique effect on top of the sticker. With this effect, you will see some surroundings and lights reflected on the sticker’s surface.

The image of the sticker is also quite minimalistic. The central element of it is the blue Titan logo, with color grading resembling a shade. Such grading gives this sticker more of a volumetric effect. Behind the logo, you can see an effect resembling smoke which consists of different shades of blue.

Underneath a sticker’s central element, you will notice a “KATOWICE 2014” inscription in gray and blue colors. There is also a “TITAN” inscription on the right side of the logo.

Currently, you can only get this sticker out of trading or through the markets. The price starts at $70 000, making it the most expensive sticker in CS:GO.

iBUYPOWER (Holo) Katowice has many similar properties with a previous sticker. Thus, it is a part of the same collection (“Legends and Challengers,” which came out on March 6, 2014) and has an identic holographic film.

But the image is a completely different beast, literally. The central part of this sticker is a red chimera that shows its fangs. On top of that chimera picture, you can see little geometrical particles, creating a shimmering effect with a holographic film.

Below the chimera, you will find an “iBUYPOWER” inscription formed of red and gray colors. And a “KATOWICE 2014” inscription is located even lower and has the same colors as the top one.

Similar to previous stickers, Reason Gaming (Holo) Katowice 2014 comes from the “Legends and Challenger” patch and has a holographic film applied.

The visuals of the sticker consist of the large “R” letter with a linear shimmering pattern. It also has a bottom layer underneath it, which is an orange square with rounded corners with tags on it. As a result, you get a Reason Gaming logo. There is also a classic “KATOWICE 2014” inscription below.

The price of the Reason Gaming (Holo) Katowice 2014 starts at $40 000 and can be rarely found on the trade market.

Traditionally, the Katowice 2014 event brought another rare sticker to CS:GO. Thus, on March 6, the world also saw a Team LDLC.com (Holo) Katowice 2014, becoming the fourth rarest sticker in the world.

The central part of this sticker is a colorful Team LDLC.com logo with many shimmering particles. There is also a “KATOWICE 2014” inscription on the bottom of the sticker.

To get this sticker, you would need to spend over $20 000 from your wallet. But if you lack funds for the in-game items, you can learn about the case battle and find out how it can significantly boost your inventory price.

As you can already guess, the Vox Eminor (Holo) Katowice 2014 sticker comes from the “Legends and Challengers” update and has a holographic surface.

The sticker itself consists of the “Vox Eminor” inscription and its logo on top. The colors the logo is painted in are orange, yellow, and pink. Traditionally, the bottom side of the sticker has a “KATOWICE 2014” inscription.

If you would like to purchase this sticker, you would need to spend a little more than $18 000. But the toughest part of obtaining the Vox Eminor (Holo) Katowice 2014 sticker is finding it available for purchase.