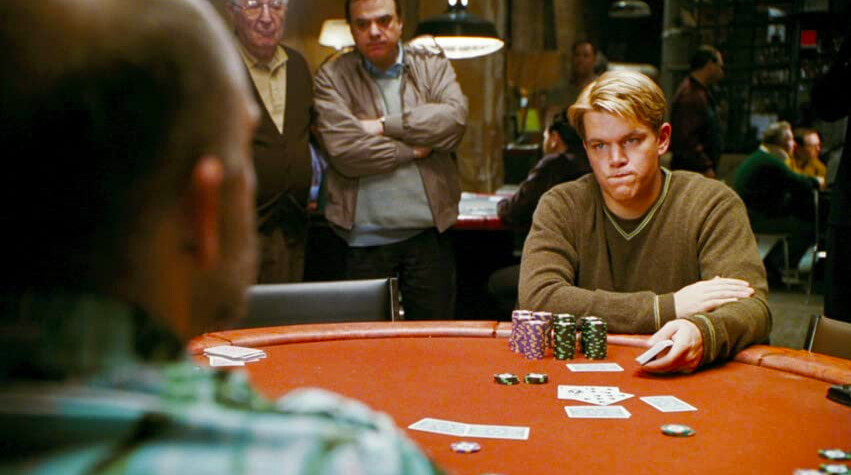 Gambling films are always emotional and dramatic. That’s why directors are careful with the casting, because the success of the film often depends on the acting skills. Often the roles of gamblers are given to stars who already have golden Oscar statuettes.

And that’s not surprising. Heroes of movies about gambling are often lucky to pull off a considerable sum, when everything seems about to go tumbling. Such moments are especially tense, and to convey genuine emotion can only talented actors.

From Robert De Niro to Brad Pitt, we’ve hand-picked the stories of actors who have gladly taken on difficult roles and deftly portrayed what it’s like to be a gambler when the stakes are high.

We decided to start the selection with the consummate Dustin Hoffman, a two-time Oscar winner. The actor received one of the statuettes for the 1988 film “Rain Man”, in which he played Raymond Babbitt.

According to the plot of the Oscar-winning film, it is Hoffman’s autistic protagonist who receives all of his parents’ legacy. His brother Charlie is outraged about this and full of desire to restore “justice”. He finds the lucky Raymond in a hospital for the mentally ill, which makes the man even more indignant. Charlie doesn’t understand at all why his brother needs so much money, so he begins to implement his insidious and dangerous plan.

Already iconic in the film is the poker game scene. Charlie takes Raymond to the game, where he demonstrates an amazing ability to calculate, which surprises his brother.

The popular actor is also the winner of two Academy Awards. Robert De Niro won his awards for the iconic “The Godfather” and the equally legendary “Raging Bull”. At the same time, the actor is best known for his role in Casino.

The film, based on a true story, is about Sam Rothstein, who has always been attracted to money and power. When mobsters offered the lucky gambler to run the biggest casino in Las Vegas, he agreed on the condition that he would decide everything himself. And he was allowed to do so. An encounter with the femme fatale Ginger completes the mosaic of a successful life. Sam decides to start a family. But the strings of control that the protagonist is used to holding are slowly slipping away from him, and his best friend and the woman he loves only add to the problems.

These days you don’t need actually to be in a land-based casino — you can just pick a 5 euro minimum deposit online.

The actor is perhaps best known for his role as special agent James Bourne. However, the Oscar statuette brought him the film “Good Will Hunting”. Damon shared the award with Ben Affleck for Best Screenplay, which the two of them wrote.

And while Good Will Hunting is really worth everyone’s watch, don’t overlook the film Cheaters, which also starred Matt Damon. The film boasts a nomination at the Venice Film Festival for its direction and captivating script.

In the centre of events in the film “Rounders” — a law student Mike, who knows everything about the laws. But that doesn’t stop him from being a professional poker player and making high stakes at the table with criminal mastermind Teddy “KGB”. Unfortunately, Mike is out of luck, and there are plenty of problems waiting for him when he loses.

Adding to the tar is old friend Lester, who gets out of prison and gets into serious trouble once again. The only way to help him is to start gambling again. But now the stakes get really high, and not just because of the money.

Brad Pitt won his Oscar for Best Supporting Actor in Quentin Tarantino’s ninth film, Once Upon a Time… in Hollywood. During his long career, the actor has played many characters that have long been imprinted in his memory. One of these was Rusty Ryan – one of “Ocean’s Eleven”.

According to the plot, Danny Ocean is a very famous con man who seems like it’s time to settle down. But as soon as the man gets out of prison, a new plan immediately matures in his head. This time the new case promises Ocean and his friends a very solid score: Danny plans to rob an entire casino chain in Las Vegas.

This audacious crime can bring the main characters 150 million dollars. But this is a scam that they can’t pull off alone. Danny Ocean finds 10 unique experts, which is unmatched: one knows all about the explosives, another can stealthily remove the purse, and someone incredibly flexible. All of them face the biggest heist of their lives.

Julia Roberts joins the star-studded cast of Ocean’s Eleven and masterfully played Danny Ocean’s ex-wife Tess. Benedict, the dodgy owner of three casinos in Las Vegas is in a romantic relationship with her, making him the perfect target for Danny’s close-up.

The charismatic Mel Gibson is the winner of two Academy Awards. The actor won awards for his work on “Braveheart”. Gibson’s uncommon talent played to Gibson’s advantage and he was often invited for roles in action-packed projects, such as Maverick.

A gambler, irredeemable, cocky gambler, Bret Maverick is about to hit the big time. The entry fee to enter a major poker tournament is $25,000. A lot of money, but in view of the possible winning of half a million — it’s pennies.

Maverick needs to hurry to collect the required sum from his debtors and in time for the steamer leaving St. Louis, on which the best masters of the card game will meet in a poker match.

The feeling of being the main character in a movie about gambling is easy! Check out all online casinos list and you will plunge into a special atmosphere of betting and offer a considerable selection of games. From classic poker to lotteries and keno, you’re sure to find something to suit all tastes.