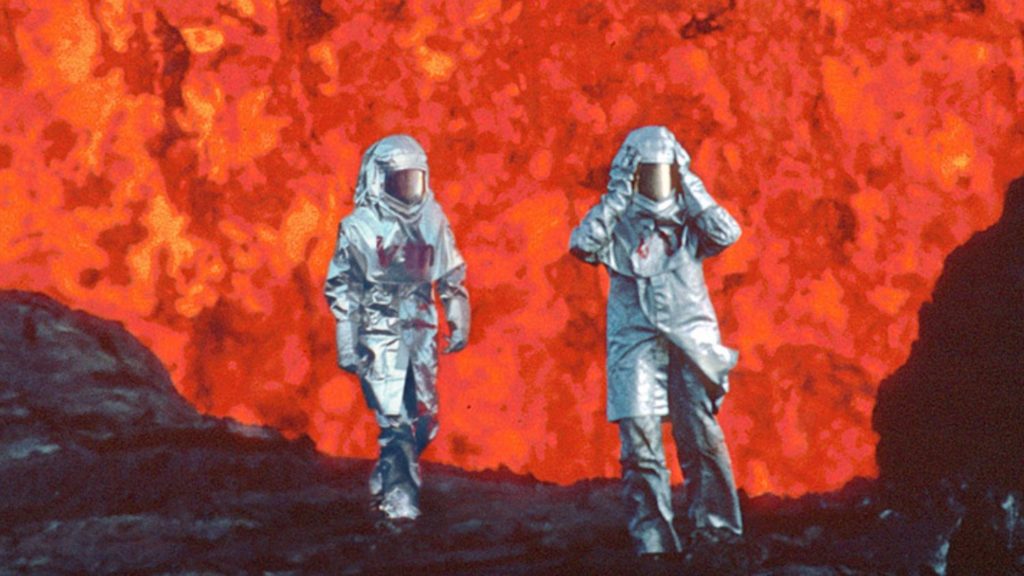 I remember it like it was yesterday. Woken up at the crack of dawn on a wonderfully warm summer day, forced to pack my backpack and head off to summer school. Everyone else gets to sleep in and pretend homework doesn’t exist while I’m stuck in a hot classroom even the teacher doesn’t want to be in. We know this because most of the time they rolled out the old TV/VCR combo and through on a documentary about volcanoes and liquid hot magma. Our options of compelling documentaries were limited to say these least, and most of us (again, including the teacher fell asleep.

I paint this memory because I would’ve killed to have a teacher throw on a documentary like “Fire of Love.” Compelling, visually stunning, raw and unfiltered, and at somewhere at its red hot core, a beautiful love story. It’s the kind of film that teaches you more than you ever thought you wanted to know about lava and volcanoes while still managing to craft and arresting and fascinating story of true love in real people.

Directed by Sara Dosa, “Fire of Love” tells the real life story of volcanologists Katia and Maurice Krafft, who died during a pyroclastic flow during the eruption of Mount Unzen in Japan 1991. They have been hailed as revolutionaries in their field, not just for their decades of research but for their filming, photography, and one of kind capturing of volcanoes around the world. Their work is long considered to be the standard of volcanic studies, and has resulted in the saving of countless lives during these natural disasters due their expansive understanding of activity and how fire and lava and volcanoes work.

They met on a bench at university, and were married shortly after. They spent their lives dedicated to their studies, sharing their love for their work and each other all the way through their final moments. They died as they lived, studying volcanoes by boldly going where no one had gone before and always, ALWAYS doing it together. “Fire of Love” compiles their archival footage, interviews, photographs, and personal film recordings of their fascinating adventures.

The film is absolutely thrilling, providing viewers with never before seen footage of volcanoes and lava. The Kraffts’ fearless pursuit of knowledge leads them to some of the most dangerous places on earth, and their joy of unfettered drive to get closer and be bolder resonates with anyone experiencing it for the first time. It is a visually masterpiece simply by its very simple nature of capturing nature itself, it is raw, pure form and their willingness to put their lives at risk at all costs. It’s hard to describe just how thrilling- because it is so immersive in its realness that it simply has to be experienced for yourself.

What they are able to capture is enough to keep any resentful summer school kid glued to the screen, and even the teacher can phone it in without actually phoning it in. The Kraffts are compelling protagonists, and their adventurous and fearless nature as the barrel forward to each new volcano and lava covered mountain is simply mesmerizing. They care so much about what they’re doing that it’s impossible to not get behind them and join them on the ride.

Adding more fuel to the fire (pun intended) is beautiful love story that adds another layer to the already fascinating “Fire of Love.” The Kraffts are resolute in their two things: their love for volcanoes and their love for each other. Their relationship is what moves the engine along, as they both compliment each other and fill in the gaps of personality and mindset to make a complete team. Again, there is an intangible element to the Kraffts that simply have to be experienced. This film never feels exploitative, as their love story is told through their own recorded lives. Sure, there’s a framework of narration (narrated by Miranda July) but a majority of the film is told through Katia and Maurice’s own words. This makes both the majestic imagery and story of their lives more personal than ever before, and it’s hard not to instantly fall in love with this film. We are, in almost real time, watching two people who gave their lives to saving others, and died as the lived doing what they love with who they loved.

“Fire of Love” is a wholly unique experience that explores the unknown in visceral fashion. It is unlike any educational documentary you’ve ever seen, and wonderfully captures the heart, soul, and love of Katia and Maurice. instantly intriguing and thrilling, it grabs you by the hand and takes you on a journey that can only be conjured up in your wildest imagination. The Kraffts allow us all to experience our natural world through film and photographs that otherwise seem otherworldly, and their lives, work and love story deserves to be shared with everyone. That was always their intention, as they lived rather selflessly together, living their dreams in hopes of new discoveries, new adventures, and lives saved. Not all heroes where capes, and “Fire of Love” introduces us to two that fit the bill.

“Fire of Love” is a must see from me, and for everyone. It is as much educational as it is visually stunning, and as much a love story as any romcom that makes you fall in love with these wonderful, quirky but revolutionary people.

It releases in theaters July 6th, 2022. Thank you National Geographic and NEON for giving us this film, which we saw during the Sundance Film Festival. You can watch the trailer below.