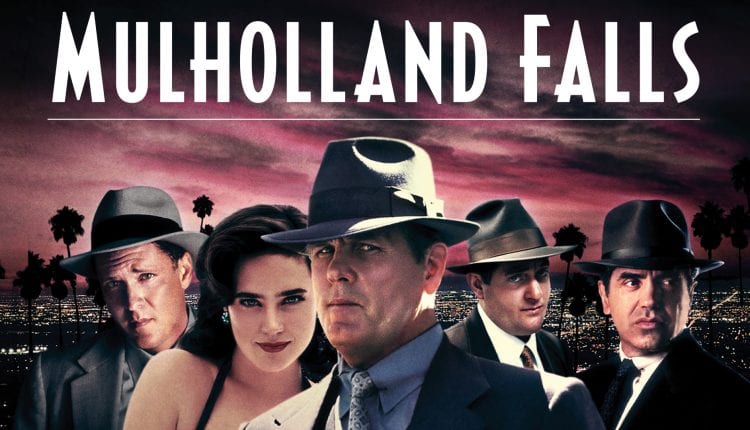 Not to be confused with David Lynch‘s bizarre take on meta Hollywood reality and nightmares of a similar name, “Mulholland Falls” is a star studded, neo-noir crime thriller set in the late 1940s. It is similar to many other films you may have seen or remember more fondly, which places this one is a strange predicament. Not good enough to be among the likes of things like say, “L.A Confidential” but also not bad enough to be lumped in with the abysmal “Gangster Squad, “Mulholland Falls” falls somewhere in the middle.

It’s not quite good enough to be great, but not quite bad enough to be skipped over entirely. The film has a lot of potential to do more than it ends up doing, and seems to squander its cast and loses sight of what makes a period piece noir thriller so compelling. There are moments where you feel as if they’re finally nailing it, tapping into to exactly the kind of thing that a movie like this should be, only to be derailed by strange narrative choices that spiral the plot out of control. “Mulholland Falls” is an ok film that should be great, and ends falling just shy of veering off its own cliff entirely.

Lt. Max Hoover leads an elite squad of LA cops who operate outside the law to eradicate organized crime from their city. They defend the streets of LA with an iron fist. However, when a young girl’s body is found in a construction site, things quickly escalate beyond what the crew is use to. Hoover actually knows the girl, although this is a dark secret he has been keeping to himself for months. As the mysterious circumstances of her death begin to unfold, the men that may be involved go far beyond the jurisdiction of the good old boys, and may end up taking them to their limits to bring justice to a young girl’s grisly murder.

There is not a single character in this film that isn’t played by a recognizable name or face. “Mulholland Falls” sports one of the most impressive casts of the mid 90s, filling it’s roster with established and up and coming faces that are immediately recognizable today. It is so packed with famous actors Rob Lowe shows up for a quick 30 seconds blink and you miss him cameo. I’m not exaggerating when I say I could complete this entire paragraph with simply rattling off names of actors that appear in this film.

Even if you end up never watching “Mulholland Falls” I’d encourage you to look up the cast and see for yourself. It also puts into perspective just how much the film squanders it all, never fully making good use of its stellar cast. They all do exactly what you would expect from them, which is the most they can with what they’re given, but the script and execution unfortunately do not do them any favors. “Mulholland Falls” ends up feeling empty, playing out the way someone thinks a neo noir thriller should be rather than an actual, well thought out one actually is.

I don’t like spending too much time referencing other films as the only framework for the one currently being reviewed, but “Mulholland Falls” simply borrows way too much from its predecessors, making it inextricably tied to them. The entire film is part “LA Confidential” and part “The Untouchables,” ultimately failing to grasp the more nuanced concepts and narratives that made both films so compelling and able to stand the test of time. These films have depth below the surface, with a clear understanding of not just the genre of neo-noir crime thrillers or underdog cops going up against powerful criminals, but also understand how to execute on those ideas and produce fully realized characters and story.

“Mulholland Falls” feels too hollow to bring any of these things to the forefront of its story, capturing the style beautifully but missing a majority of the substance. Now, as stated, it is by no means “Gangster Squad” which ended up being a star studded clusterf*** that felt more like a cosplay, community theater production of “Guys and Dolls” but without all of the charm, interesting characters, coherent story, and music. No, “Mulholland Falls” is most certainly not that, and does just enough to avoid these pitfalls. Unfortunately, it doesn’t do enough to measure up to its ambitions and falls apart the longer it goes on.

This is all most apparent in the third act, where “Mulholland Falls” loses most of its steam and control over its story. It ops to do away with any of its strengths and focus on more nonsensical, out of their depth ideas that never really feel like a valid payoff. By the time the third act begins to unfold, it feels as though we were transported to a completely different film, zeroing in on aspects of the mystery that are nearly as interesting as any of other elements presented. The conclusion is far fetched at best, and leaves viewers with more questions than answers despite decidedly resolving the story.

Characters thought to be integral to the story disappear entirely, shifts in narrative go from a homicide mystery to a military conspiracy, and the FBI shows up because, well, reasons. It’s frustrating, because up until this point, “Mulholland Falls” has all the potential to be better than what it ends up becoming.

“Mulholland Falls” could be better, and were it not for its incredible cast and perfectly stylized cinematography, it should by all accounts end up being a train wreck. The film leaves you wanting more of what it does well and much less of its own ridiculous ambitions.

“Mulholland Falls” may throw itself off its own meta narrative cliff, but it does survive the fall. Barely. Watch it on Amazon Prime here.