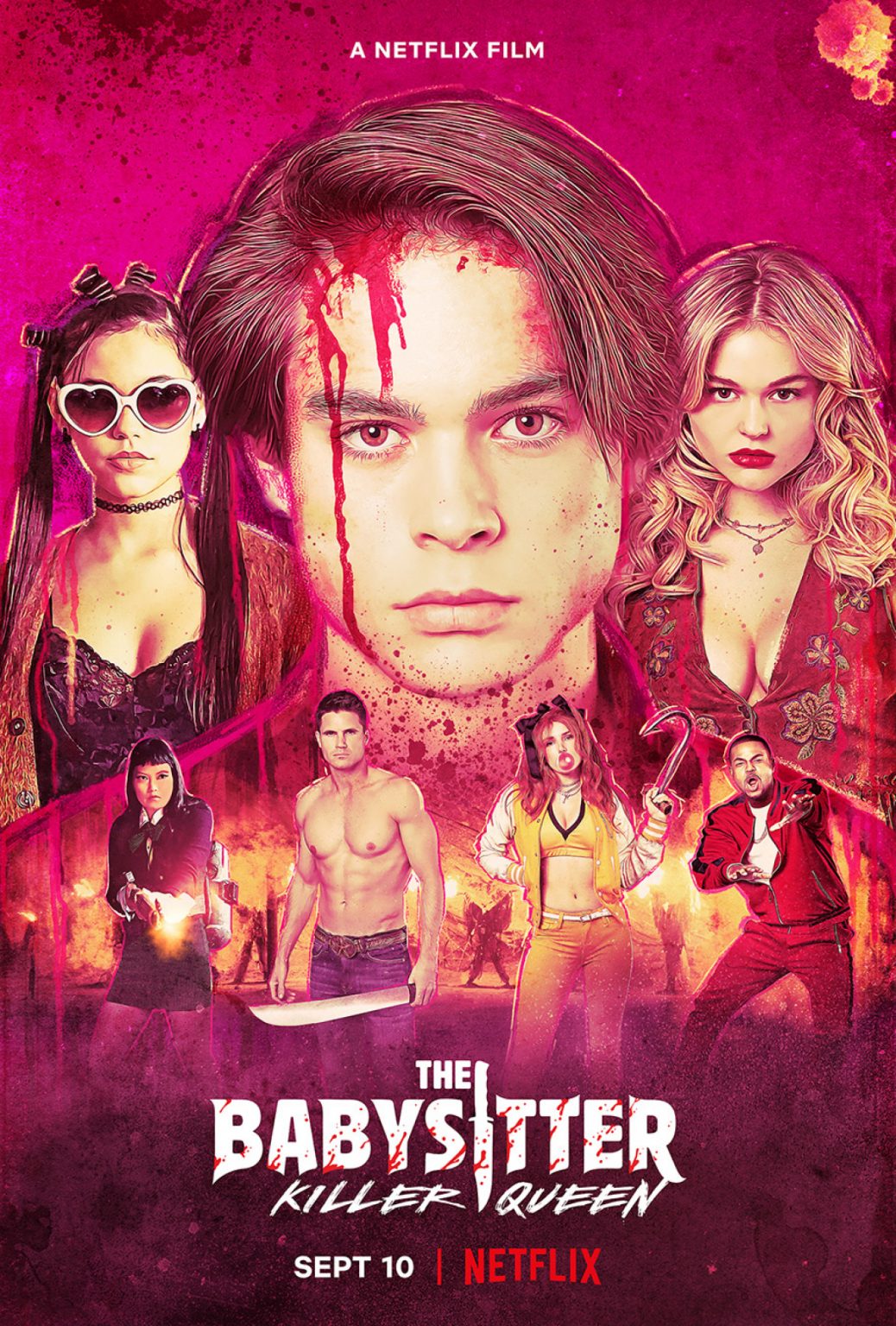 Hollywood seems set on creating sequels from successful stand alone films. Never learning the lesson that lightning doesn’t strikes twice, the constant attempts to recapture the magic of their predecessors rarely seem to reach the same level of success. “The Babysitter” from 2017 and its new sequel “The Babysitter: Killer Queen” are prime examples of this mistake, with “The Babysitter” being a surprisingly fun comedy/horror that never required more than what we got. “The Babysitter: Killer Queen” tries to recapture the magic of its predecessor, and while it keeps the same tongue in cheek humor and gimmicky gore, it doesn’t quite hit the bullseye.

This one picks up two years after the events of the first film. Cole (grown up a bit more than two years it feels) is struggling to convince people he’s not actually crazy despite being the only person who believes his story about a satanic blood cult that tried to murder him. With nowhere to turn and no one to turn too, his friend Melanie convinces him to ditch school and head to the lake to get away. Things quickly turn south for Cole, as old foes return from the dead to complete the ritual they failed to do two years prior. Once again, Cole must fight to survive until sunrise while being relentlessly pursued by high school demons.

As stated, “The Babysitter: Killer Queen” is a great example of a sequel for a film no one expected to succeed in the first place, but made it anyway based on that success. “The Babysitter” was a surprise hit for comedy/horror on Netflix. The over the top horror gore mixed with the sharp wit and self aware humor contributed to it being more enjoyable than expected.

But “The Babysitter” felt contained, and something that only works once. “The Babysitter: Killer Queen” lacks the element of surprise and bares the burden of expectation. It’s unfair to say that the sequel is a bad film, because it’s not. It’s pretty enjoyable overall, and attempts to keep all of the things that made the first one enjoyable. Unfortunately, it’s just not enough. Additionally, the film relies heavily on the events of the first film, making “Killer Queen” incapable of standing on its own.

Most of the creative team from the first film return, including director and producer McG and all of the original cast. Noticeably absent is original writer Brian Duffield, replaced by a writing team that also includes McG. This small but significant change contributes to “Killer Queen” feeling more like an adaption than a direct sequel.

The creative team is missing its creator, and the sequel suffers for it. The returning and new cast are fine, but many are simply impressions of their predecessors.

The stand outs here are Cole (Judah Lewis) and his new friend/love interest Pheobe (Jenna Ortega). While much if not all of their dialogue feels forced and cliche, both have enough onscreen chemistry and timing to make them interesting despite their poorly written characters. Aside from our protagonists, everyone else feels dialed up to 11. “Killer Queen” trades out subtly for over the top, almost slap stick comedy. People like Robbie Amell and Bella Thorne are simply imitating themselves from “The Babysitter,” repeating the exact same jokes without the unassuming wit. Melanie (Emily Alyn Lind) attempts to fill the shoes as the primary antagonist, and while she does fine as an obsessed with fame blood cult sociopath, she’s just not Samara Weaving.

Weaving is sorely missed here. While she is not completely absent, she was magnetizing in the first outing, perfectly balancing the comedy and horror of satanic worshipping babysitter. Obviously, Weaving has skyrocketed since 2017 which would explain why she isn’t the primary antagonist of the sequel. But it must be said that this is another error that works against “Killer Queen.” Lewis and Ortega certainly have believable chemistry and make the best with what they’re given. Lewis and Weaving, however, are unmatched together, and are powered by a more complete and realized script in “The Babysitter.”

For all the things that “Killer Queen” tries to get right, the things it gets wrong end up making it difficult to state the sequel’s case for being made. The story feels stretched even for being based on a bizarre premise, and it doesn’t add anything to the universe that needs to be included. “The Babysitter” is a standalone comedy/horror film that was surprisingly good. The sequel is an unnecessary one, that can’t quite put the genie back in the bottle. It’s fun, but it can’t compete with its far superior predecessor. Sometimes it’s better to just let a sleeper hit relish in its own success rather than constantly try to recapture its magic with sequels no one asked for.