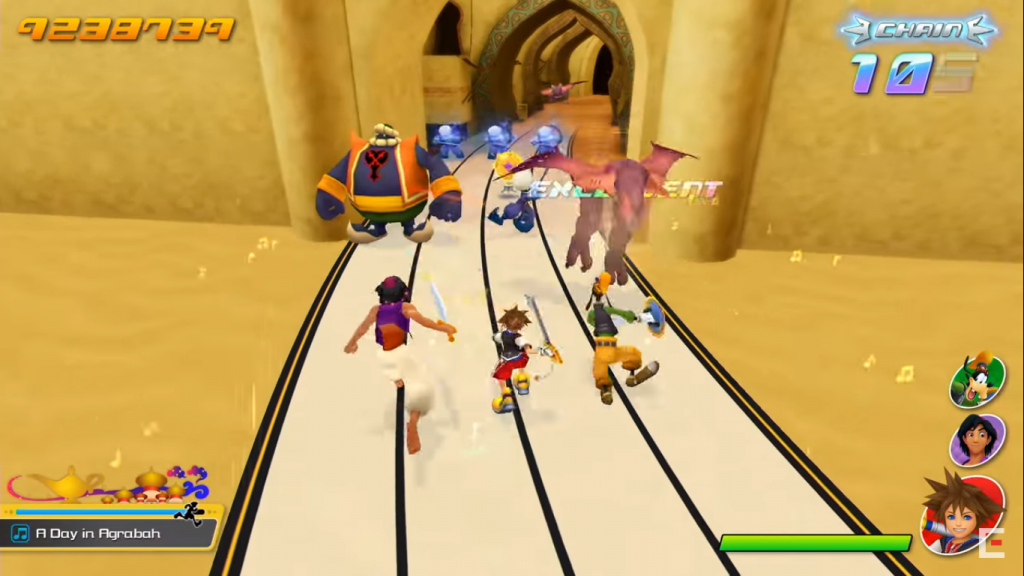 Returning to the orchestra briefly, we then see new scenes from Square Enix’s upcoming mobile title “Kingdom Hearts Dark Road.” We even get a scene of young Xehanort stepping towards a portal of darkness. He is on Destiny Islands and next to him is a mysterious cloaked figure.Back to the orchestra, before the “Kingdom Hearts 3” soundtrack is announced. We see scenes from the various worlds in the game accompanied by their music. Then we get to the big announcement.

We get our first look at Square Enix’s new game, “Kingdom Hearts: Melody of Memory.” This newest title is a rhythm game that will see Sora and friends hitting buttons to the beat of the music. They travel to worlds defeating Heartless and Organization members through music. Both the gameplay and character designs look similar to “Final Fantasy Theatrhythm.” This new game will be coming to PlayStation 4, Xbox One and Nintendo Switch.

There is suddenly an abrupt static cut to the trailer. The tone shifts to one far more serious. We see a younger Xehanort closing some sort of pod, Heartless everywhere and a small child placing their hands on a gate. We see Kairi and the gang in “Kingdom Hearts 3 Re:Mind.” The clip ends with Kairi in a battle stance facing off against a cloaked figure. Slowly, the figure begins to remove their hood. Could this be the big reveal of the mysterious Master of Masters? Regardless, the trailer promises a 2020 release for everything we have seen. Briefly, we are shown some new figures called Second Memory. One of Axel and Roxas, the other of Sora and Roxas. We return to the orchestra one last time before the trailer ends.

All of these clips are part of what Square Enix is calling “Kingdom Hearts series 2nd phase.” This phase includes “Kingdom Hearts Dark Road,” “Kingdom Hearts 3 Re:Mind,” and Kingdom Hearts: Melody of Memory.” Interestingly, there are still two empty slots left for titles filling the second phase. Could they be remakes? Re-releases for Nintendo Switch? Or perhaps even new titles? We will have to wait and see. You can watch the full trailer below.

This title will be coming to Switch, PlayStation 4, and Xbox One later this year.