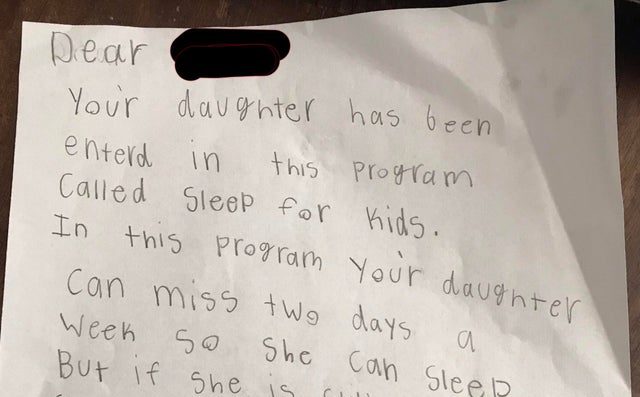 Little Girl Writes Genius Note to Sleep in On Schooldays

Everyone knows that getting up in the morning is hard. Adults have the luxury of drinking a cup of coffee but unfortunately for kids it’s not so easy. They have to motivate themselves to get out of bed, get dressed and get ready for school all on their own. I will admit that I was one of the kids that had a hard time wanting to wake up at all. That is why when I came across this genius note I had to write about it.

The original post comes from the reddit r/funny. This little girl wrote a note from her teacher to her parents saying that she had been enrolled in a program called “sleep for kids”. It is fascinating that a kid would be able to come up with such an genius plan. Now if only her handwriting was able to convince the note recipient that would have been even better.

Whoever wrote this has a lot of potential. She seems like a really smart little girl and her parents are going to have to keep a close eye her. Overall, I’m impressed. Not only is she smart enough to come up with an elaborate plan, but now her parents have an amazing story to tell. This is the kind of keepsake you can’t put a price on.

Now if only they had a similar program for adults called “Sleep for Adults” I might be able to write a note for work.

Have you ever tried to put one over on your parents? Tell us about it in the comments!