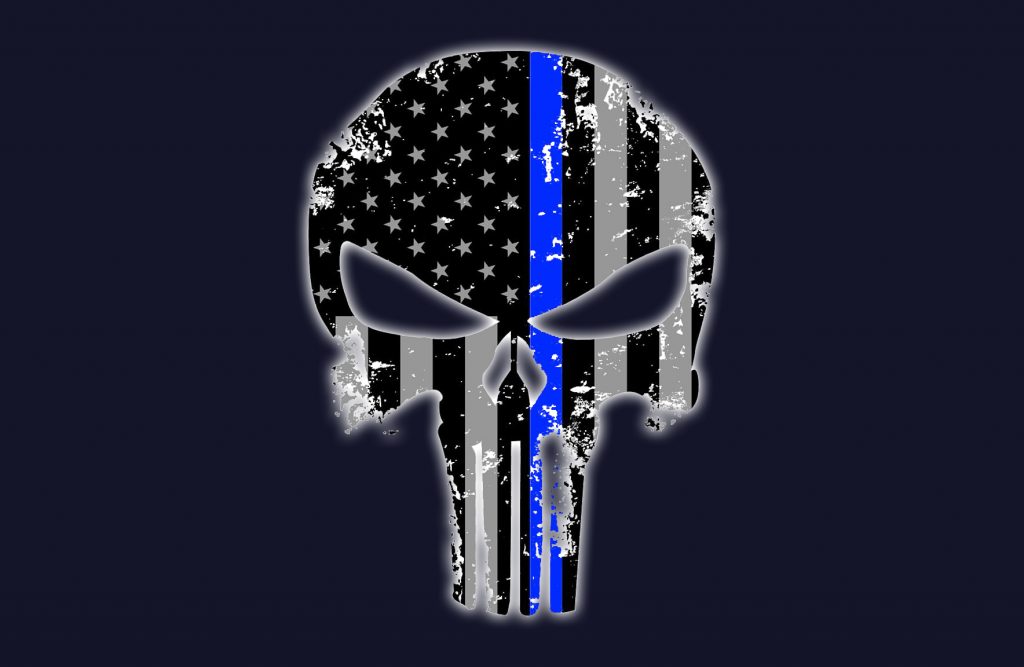 The St. Louis PD are trying to put forward the idea that they should be using the symbol for the Punisher across all their social media accounts. They are calling the new symbol Punisher Thin Blue Line and there has been a large debate on whether or not this should be a sign of solidarity or be deeply disturbing to the public.

They have changed the white skull to now incorporate the Thin Blue Line Flag. The Thin Blue Line Flag is a symbol for the police that represents the officer and the courage they find deep inside when faced with insurmountable odds. The black background is supposed to be a reminder of those who have fallen. This is not bad in itself but you have to remember that officers take an oath to standards of integrity, bravery and honor to the community and law. None of which Frank Castle stands for.

Frank Castle or “The Punisher” is an anti-hero. He goes up against the corrupt and only was born because of severe incompetence in the justice system. For them to start incorporating this type of vigilante justice symbol is worrisome to say the least.

The creator of the Punisher, Gerry Conway has stated time and time again that it is completely messed up when authority figures look to emulate a character like Frank Castle. He told SyFy Wire in an interview, “To me, it’s disturbing whenever I see authority figures embracing Punisher iconography because the Punisher represents a failure of the justice system… He’s supposed to indict the collapse of social moral authority and the reality some people can’t depend on institutions like the police or the military to act in a just and capable way.”

The St Louis PD are currently selling shirts to raise funds for a fallen officer who was killed last month. Officer Michael Langsdorf was taken after attempting to confront a suspect in a cash checking scam. The proceeds from the shirts are going to the family. So there is some good that has come from this, however those shirts will now serve as a representation of vigilante justice and the justice system, which doesn’t make sense.

Some of the comments from the Facebook page are lashing back on the use of the image as well. One user says “Gee I wonder why anyone would think the symbol of a character known for killing people without due process is a red flag.” Another comments, “The Punisher is a homicidal vigilante who operates outside the law, dispensing vengeance, not justice. Any police officer who wears or displays that logo is by definition unfit for their job.”

Conway agrees that this is a misuse of his character. In another statement to SyFy he said, “In a way, it’s as offensive as putting a Confederate flag on a government building.” If you know anything about comic book history lore you would be apt to agree. There is also the question that comes into play as to whether or not this is even legal. Since the copyright over companies using the logo on products was brought to court just two years ago.

The outcome of this situation is still to be determined and we will be following this story closely as it develops.

What do you think of this? Are people overreacting? Tell us what you think in the comments!