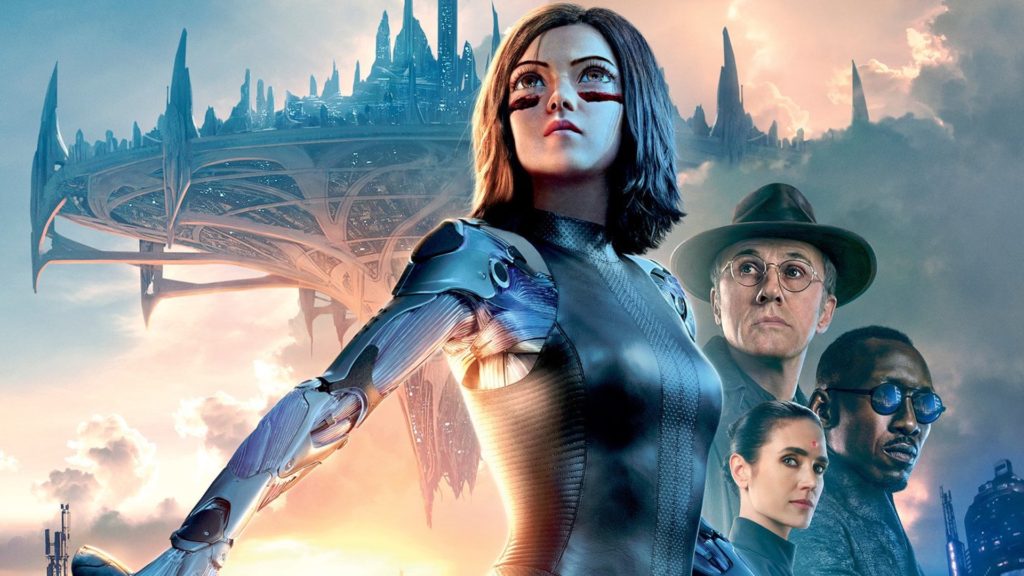 I was at our local Regal Cinema recently when I noticed one of the theaters was closed for renovation. I had heard they would be upgrading to recliner seats sometime this year so I thought that was why, but when I asked a manager, I was told it would be a new 4DX theater. So, when work was completed and 4DX showings of Alita: Battle Angel were scheduled I thought I would try it out. Both the movie and the theater were integral to the combined experience so both are reviewed here.

I’m not familiar with the manga Gunnm the film was based on so I can’t judge how faithful it was to the material. Although like some of its cyborg characters, the movie plot seemed to be an amalgamation of pieces we’ve seen in other films. But from the moment Dr. Ido (Christoph Waltz) finds her core on a trash dump, takes her home and gives her his deceased daughter’s name and cyborg body, the movie takes off and keeps going at a fast pace. There are slight pauses in the action as Alita (Rosa Salazar) meets a boy (of course) and a dog (less obvious) and starts to experience her strange new world (chocolate is her favorite food) because she has no memories of a life before she woke up at Ido’s clinic.

This dystopian cyberpunk world of 2563 after “The Fall” is split into the floating city of Zalem and Iron City below. The denizens of Iron City have a passion for the sport/game of Motorball, the champion of which gets a trip up to Zalem and a healthy paycheck. The only other way up to the floating city seems to be to make a deal with Vector (Mahershali Ali), who seemingly runs Motorball and everything else in Iron City.  But Vector himself is only a puppet for Nova (Edward Norton), a denizen of Zalem who has eyes everywhere. He is also an old enemy of Alita, although she doesn’t realize it until she starts to get flashes of memory of her former life. Everyone in Iron City seems to have secrets, and Vector and Nova have an interest in Alita due to her superior cyborg technology. Just her technology, not her, as they want her dead. There are numerous chase scenes and battle scenes throughout the movie as Alita participates in Motorball and faces off against criminals, bounty hunters, and Vector/Nova’s henchmen. All are well crafted and exciting. While we see only glimpses of Zalem in the film, the settings of the Iron City are vibrant and rich in detail. So go for the visuals and effects and don’t worry too much about the plot.

I wasn’t sure what to expect, the “Star Tours” ride at Disney World was the only thing that came to mind when hearing about the new 4DX experience. There wasn’t quite that much motion, you didn’t need a seat belt, but there was a lot more movement than I expected. Not only did the seats tilt forward and backward, but there were times when they seemed to lift and move (not sure how that affects eating or drinking, or more significantly trying to take a bathroom break after a large soda). So two thumbs up on the motion for being pretty darn cool.

My seat was near the front of the theater so most of the strobe effects seemed to go off behind me. The smell-o-vision aspect of the theater didn’t seem to do much for me; I could tell when they puffed something in my face that I was supposed to smell something but most of the time I couldn’t really tell what the smell was. There was a stronger “new theater smell” from the leather seats when I entered the theater than from the scents. So overall no thumbs for the lights and smell, it didn’t detract from the show but didn’t really add much either. In terms of the water effects, I have to admit I turned mine off after the first few mistings. I was concerned that I would eventually have to keep cleaning my glasses if they kept up with it, so I don’t know if there would be effects stronger than a misting or not. Air effects included a number of puffs to the face. Not sure if there was a blowing wind effect in addition to the puffs; if so, it wasn’t memorable. One thumb up for the air effect although some of that might be the novelty and could wear off over time. Touch effects were reminiscent of Disney World again, in this case the seats in “A Bug’s Life.” You would periodically feel “movement” in the seat cushion or a poke in the back. One thumb up.

So overall the 4DX experience was better than expected (granted my expectations weren’t too high).  Would I pay the increased cost for a lot of movies?  No, but I would be willing to try it again for a movie that seemed geared for the effects, motion in particular.  It might be interesting to see the upcoming new Fast & Furious movie with the motion effects….