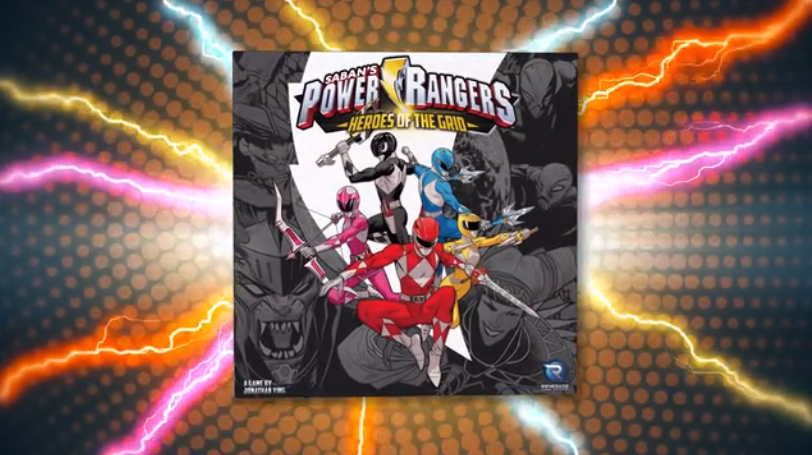 NEW Power Rangers: Heroes of the Grid Board Game

The game is being produced by Renegade Game Studios. They have been around for four years and have made over 60 games. Seven of which were Mensa Select Award winning titles. They have made everything from family games like Kitty Paw and The Fox in the Forest, strategy games like Clank! A Deck-building Adventure.

Designed by Jonathan Ying – one of the designers behind Star Wars Imperial Assault, and Warhammer 40k Forbidden Stars, and the lead designer of DOOM the Board Game (2016) and Bargain Quest – Power Rangers: Heroes of the Grid features incredibly detailed oversized plastic miniatures that bring the epic heroes of the hit action show to life.

Power Rangers: Heroes of the Grid gives each player the chance to take the role of a Power Ranger, the heroes of Angel Grove who defend the earth against the evil Rita Repulsa and her nefarious foot soldiers. Each Ranger comes with a unique combat deck representing their special skills and fighting style. From the Red Ranger’s leadership karate skills, to the Yellow Ranger’s Sabertooth ferocity, to the Blue Ranger’s tactical mind, each ranger brings a unique set of skills to the table. You’ll need to use your powers well if you intend to save the world!

In each game you’ll protect four combat zones that are being targeted by the evil Rita Repulsa. Each round, enemy forces will deploy onto these zones and cause chaos among the populace. Who knows what sort of strange monsters Rita has cooked up for the Rangers this time?

During play, Rangers must manage their actions and coordinate their defenses, moving to the locations under the most threat and doing battle with enemies while also finding time to rest and recover between engagements as they prepare to defeat the mastermind behind this plot.

During battle, each ranger and each enemy in the location will participate in the combat sequence. Enemy cards represent enemy actions and health. Rangers can attack these cards to disrupt their attacks. Each foot soldier card the rangers defeat removes one soot soldier figure from that location. Monsters are much deadlier foes with a variety of special attacks that you’ll need to deal with and defeat before you send them packing!

A Ranger’s combat deck represents their health, with each card played and blow sustained slowly whittling away at their options. They’ll need to find time to rest or power-up at the Command Center if they want to stay fresh for the next fight!

As the Rangers defeat enemies and progress through the game, they’ll unlock Zord cards which provide them unique abilities and special actions they can perform. Eventually they’ll be able to unleash the full power of the mighty Megazord!

Each game reaches its climax with a confrontation with the enemy Master, a devastatingly powerful foe who must be thwarted if the Rangers wish to save the city! Do you have what it takes?

You can start contributing Here, or hope that a local game store will have it. Either way if you get this you are bound to have a Mighty Morphin good time!

Find out more about Renegade Game Studios at www.renegadegames.com

Will you be playing this with your friends when it releases July* 2019?  Tell Nerdbot in the comments and get the conversation going!