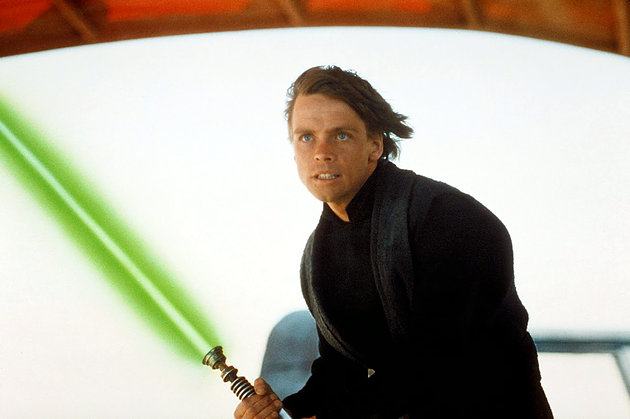 By now, we’ve all seen the newest The Last Jedi trailer. We’ve all seen some cool moments. We’ve all wondered if Rey and Kylo Ren switch sides. We all want to know just how godawful annoying ARE the Porgs. But I have one huge question yet to be answered…

Where the *bleep* is Luke’s lightsaber?

See, somehow Maz found Anakin’s lightsaber that was gifted to Luke, despite it falling to seemingly oblivion on Bespin. After that, Luke built his own, green lightsaber. Obviously this could be a mistake, but the hilt is definitely Anakin’s in The Force Awakens, not Luke’s from Return of the Jedi. We also have yet to see Luke hold it, wear it, or otherwise make an indication that he still has the weapon he constructed as part of his Jedi training.

Does this mean that he gave up the ways of the Jedi? Is it simply an oversight? Does he have it but hasn’t had a need to use it? Could there be a THIRD force using youngster running around that Luke gave his green lightsaber to?

Forget Snoke’s origin or Rey’s parentage. The REAL question is where is Luke’s weapon. If you were a kid who grew up on Star Wars (the REAL Star Wars, not that prequel nonsense), you knew nothing was cooler than Jedi Knight Luke and his green blade. I sure how Luke – or someone – turns it on in The Last Jedi.

What big question do you want answered? Let Nerdbot know in the comments!