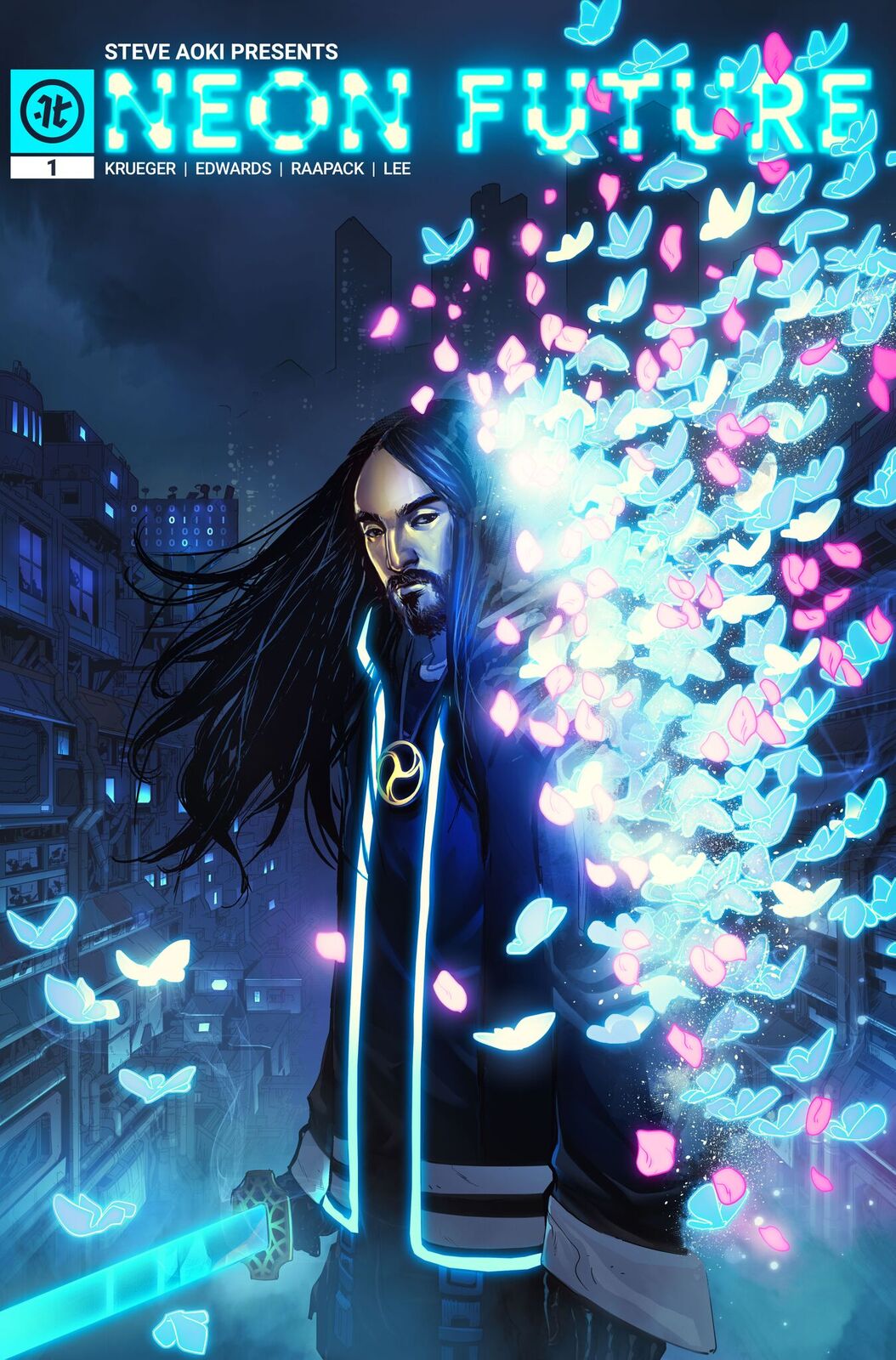 NEON FUTURE is set roughly 30 years in the future in an America that has outlawed advanced technology. A civil war is brewing between the Augmented, an oppressed class of people who have chosen to integrate technology into their bodies, and the Authentic, who have not.  The resistance movement “Neon Future” is led by the mysterious Kita Sovee (a character modeled after Aoki), who strives to bring peace, by showing the world a brighter future in harmony with technology.  “I’m so excited to be part of
NEON FUTURE,” said Krueger.  “It has all the elements of a dynamic story, with compelling characters who evolve into true heroes by overcoming suffering.  Working closely with Steve Aoki’s extraordinary imagination our team has built something really special.”  The series is a compelling, character-driven sci-fi story that chronicles the dangers of unchecked power and the limitless nature of human potential.

“My obsession with mixing science and tech all started when I was a kid reading comic books.  It took me on a ride to see how far the imagination can go, seeing ideas crossing the threshold from science fiction to fact,” said Aoki.  “That’s the foundation of Neon Future, where we’re headed as we evolve, our downfalls, our victories and breakthroughs to find a way to survive and thrive through it all.”

NEON FUTURE will be available to pre-order online at http://neonfuturecomic.com/.  Free digital copies will also be made available exclusively for all who sign up for the newsletter. A free physical copy of Issue 1 Cover A (and all other variant covers for purchase) will be available at the Impact Theory Booth #236 at New York Comic Con October 4th-7th.

Impact Theory’s primary mission is to tell wildly entertaining stories that focus on themes of empowerment, and bring together some of the most talented creators, writers, and artists in the industry.  “With the team of Aoki and Krueger, we could really explore the genre to build a sci-fi world that hasn’t been seen before,” stated Tom Bilyeu, founder of Impact Theory. “Coming out of the gate we wanted to show what Impact Theory is capable of as a studio.  NEON FUTURE lets us explore relevant themes of culture, technology, and where we’re headed as a species at a much deeper level.” 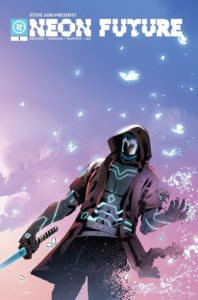 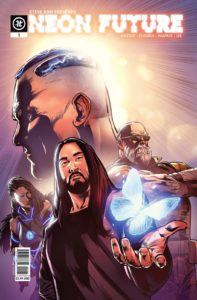 Nearly thirty years from now, in response to a global economic crisis, the U.S. has enacted Article 10, commonly known as “The Return,” which made all advanced technologies illegal.  The Return promised to create jobs by eliminating the technology that had displaced so many workers through automation.  But the lasting result has been an increase in the class divide, blatant bigotry, and a war between the Augmented, who have chosen to integrate technology into their bodies, and the Authentic, who have not. Out of the systematic oppression of the techno-class, a resistance movement known as Neon Future was born.

Led by the mysterious Kita Sovee (inspired by Steve Aoki), they strive to bring peace by showing the world a brighter future in harmony with technology.  When Neon Future brings TV star, Clay Campbell, back from the dead with a rare technology, the uneasy balance between the government and the techno-class is threatened. Clay learns from the elusive rebels about the true nature of his past and his unexpected role in a brewing civil war. From Steve Aoki, and Eisner Award-Winning writer Jim Krueger, comes an innovative and compelling story of the dangers of unchecked power and the limitless nature of human potential. Approved NEON FUTURE artwork for media available here.

STEVE AOKI is a 2x Grammy-nominated international producer/DJ and founder of the trendsetting record label, events/lifestyle company and apparel line Dim Mak. Aoki is a tastemaker, entertainer, designer, entrepreneur, and philanthropist. In 2012, he started THE AOKI FOUNDATION whose primary goal is supporting organizations in the brain science and research areas. Musically, Aoki is known for his genre-spanning collaborations ranging from BTS to Migos, Linkin Park, Louis Tomlinson (One Direction) and more. His debut artist album was nominated for a Grammy in the Best Electronic/Dance Album category. His follow up albums Neon Future I and Neon Future II were certified Gold. In 2017, Aoki released Kolony (via Dim Mak Records / Ultra Records), which debuted at #1 on the Electronic Album charts and marked his first full turn into rap music. Most recently, Aoki released his singles “Azukita” with Daddy Yankee, Elvis Crespo and Play n Skillz and “Pretender” with AJR and Lil Yachty. With his second Grammy nomination in the Best Music Film category as the subject of the 2016 Netflix Original documentary “I’ll Sleep When I’m Dead,” countless awards, including holding the Guinness Book of Records title for ‘Most Traveled Musician in a Single Calendar Year’ and TV appearances from The Daily Show with Trevor Noah to Martha & Snoop’s Potluck Dinner to X Factor (UK), Aoki is a truly a global force.

Impact Theory is a content studio made up of some of the most accomplished and exciting producers, writers, and artists in entertainment.  We believe that stories have the power to change people’s lives in the most profound way possible.  Our goal is to tell stories that are wildly entertaining, but also empower at the same time.  Our stories will inspire you to take action and push yourself to your limits.  No matter what Impact Theory story you read, at the end, win or lose, you will have changed as much as the character.  That’s our mission: that you walk away with the conviction that anything is possible if you’re just willing to pay the price of change.